David Aronchick has heard his fair share of fart noises, movie quotes and classic TV one-liners over the years. And as the CEO of Hark — a Seattle startup that is best described as a YouTube of sound clips — Aronchick never really tires of it.

“I laugh every time,” says Aronchick when asked about the proliferation of fart noises on Hark. Well, he’s not the only one who appears to be getting a kick out of those sounds. 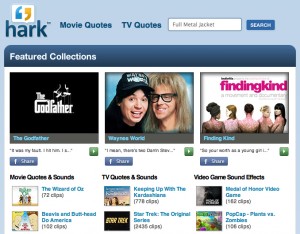 The three-year-old company today is announcing a major milestone, reporting that people have listened to more than one billion sound clips on Hark.

“The number is so big it is hard to think about ever seeing anything quite so large, let alone our company achieving something THAT BIG,” Aronchick writes in a blog post.

Hark, which employs 15 people, is growing fast. It attracts about 15 million unique visitors per month, and is growing at about 55 percent quarter over quarter. To date, 324,803,811 people have listened to a sound clip on Hark.

The most popular short quote on the site has been “Epic Fail,” while the longest clip was Barack Obama’s healthcare speech.

The company, formerly known as Entertonement, has raised more than $4 million from Redpoint Ventures and others.