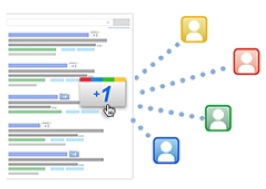 Can Google make Internet search more social? That’s the goal with +1, a new service that allows Google users to mark things they find (think travel spots, recipes or concert reviews) with an easy-to-use button. Comparable to Facebook’s ubiquitous “like” button, Google notes in a blog post that the service will provide relevance to a user’s individual search.

“The beauty of +1’s is their relevance—you get the right recommendations (because they come from people who matter to you), at the right time (when you are actually looking for information about that topic) and in the right format (your search results).”

You can see it in action in this video:

The concept is pretty cool, but unfortunately it is only available at this time to a small percentage of users in the U.S. Danny Sullivan at Search Engine Land has a great overview of how +1 works, noting that the idea “makes a lot of sense” and pointing out that it puts Google squarely in competition with Facebook

Google might have convinced itself it’s not building a social network, but +1 certainly seems to be a good start toward one. While it is beginning as a “layer” that’s part of search, those +1 buttons — when they hit the web — will put Google directly alongside Facebook in the “liking” game.

Interestingly, the announcement of +1 comes just as the company admits that the launch of Google Buzz “fell short of our usual standards for transparency and user control—letting our users and Google down.” As part of that, the company said today it has entered into an agreement to settle outstanding issues with the FTC.

Can +1 help reverse the failures of Buzz, which never really took off? Personally, the whole Google Buzz service never really resonated with me. Google +1, at least on the surface, seems like a much easier concept to understand.

Interestingly, the advancement also could have implications for Microsoft, which has been attempting to eat away at Google’s own market dominance in Internet search. You’ve got to wonder whether Bing also has something up their sleeves when it comes to easy ways to recommend content found through Internet searches?

So, why the name +1? Google explains that’s the digital shorthand for “this is pretty cool.”