Mircea Paşoi and Cristian Strat, who have been programming together since high-school, started the company instead of taking jobs at Facebook and Google. The concept is pretty cool, and I am eagerly awaiting my first summary.

Check out the video below, and I swear the John in the video was not modeled after me, though Summify does address a big issue I have in terms of managing the daily inflow of news.

As the video suggests, Summify sucks in content from relevant social networking services and then spits out the most relevant content. At this point, the service works in conjunction with Twitter, Facebook and Google Reader. Summify’s goal is to deliver 5 to 10 important headlines or news nuggets, tailored specifically for the user.

I’ve signed up, and I’ll let you know if it simplifies my life. Glaser, for one, thinks the Romanian founders are on to something.

“Most people would say that they only see a fraction of what they are following on the social web. There’s a lot of good stuff, but also a lot of noise,” Glaser said. “Filtering out the noise and finding the signal is a huge problem that nobody else has been able to effectively address. Based on using Summify and working with Mircea and Cristian for the past 3 months, I think they’ve created a breakthrough product.”

Here’s a look at Glaser’s personal news summary, which is interesting since there’s no real mention of the executive turnover at RealNetworks. 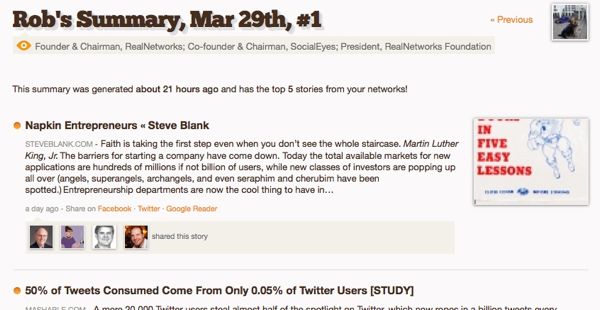