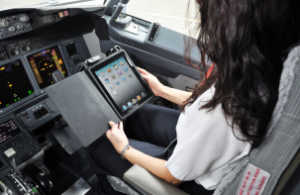 Last fall, I reported that Alaska Airlines planned to provide pilots with iPads, speculating that the touchscreen devices could be used to replace bulky paper manuals. Now, Alaska Air has made it official, announcing today that the Seattle-based airline plans to outfit all of its pilots with the tablet computers by mid-June. It becomes the first major airline to replace paper manuals in the cockpit, the flight operation guides which typically weigh about 25 pounds.

The iPad, on the other hand, weighs just over a pound.

“We’ve been exploring the idea of an electronic flight bag for several years, but never found a device we really liked,” said Gary Beck, Alaska Airlines’ vice president of flight operations, in a release. “When the iPad hit the market, we took one look at it and said this is the perfect fit.”

The iPads will come with an app called GoodReader, which contains PDF versions of 41 flight systems and performance manuals, reference cards and other materials. They also include links and color graphics, with the airline saying that the electronic flight bag will save about 2.4 million pieces of paper.

The airline said that the iPads will not only save on paper costs, but help reduce weight on the aircraft leading to more fuel efficiency.

And with some flight bags weighing as much as 50 pounds, the airline also said that the iPad could reduce muscle injuries which occur when pilots attempt to carry the bulky flight manuals through the airport.

As a class 1 device, the iPad must be stowed during takeoff and landing. So, don’t worry about your pilot playing a game of Angy Birds as you make that approach to Sea-Tac.