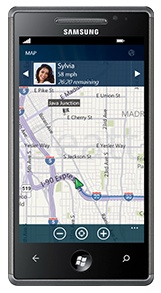 Bryan Trussel, the founder and CEO of Glympse, the popular mobile location tracking app, is accustomed to watching large tech companies nibble at his heels. In fact, with Google Latitude and Facebook Places, the chatter echoed loudly that Glympse would be run over.

Now, Apple is making waves in the social location arena with a new service called “Find My Friends” — which like Glympse — allows users to temporarily share with others where they are located in real-time. And, once again, Glympse is being discussed as startup road kill.

But Trussel, who prior to founding Glympse spent 16 years at Microsoft, says reports of its death are premature.

“…It is nice to see someone as large and innovative as Apple embrace the model we pioneered in temporary location sharing,” Trussel tells GeekWire. “However, we’ll continue to have a competitive edge of being cross platform.”

What Trussel means is that Glympse has an inherent advantage in that location information can be shared with anyone, whether they own an iPhone, Android, Blackberry or just want to access the information on the Web.

“Glympse is all about impromptu sharing your location with anyone, even if they don’t have the Glympse app, or even don’t know what Glympse is,” explains Trussel.

The Redmond startup does have a few other things going its way, namely that it just raised $7.5 million from Ignition Partners, Menlo Ventures and others. And Trussel said that the business is booming, despite all of the new entrants.

Given the new capital infusion, Trussel and the company’s investors think there’s an opportunity to build something bigger than a service that relies on one mobile platform. In that regard, he compared Find My Friends to Apple’s FaceTime video chat service, and Glympse to Skype.

And Skype, he said, did pretty well for themselves as the mass market, cross-platform mobile/PC solution.