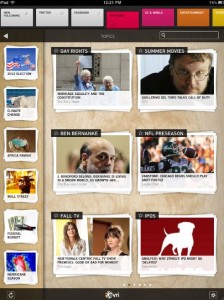 Applications like Flipboard and Pulse look to transform the way people consume news and information on the iPad. Now, Seattle startup Evri is jumping into the mix with a new iPad app that creates an automated news feed around more than 2.5 million topic areas.

For example, say you like the Seattle Seahawks. Evri can create a specific channel around that topic area that draws in news stories as well as musings from social media outlets like Twitter and Facebook. It then displays that information in a visually appealing manner, making it easy for the Seahawks fans to get the news they want.

It can even go more granular — creating topics around Hollywood Rehab, Celeb Breakups or Major League Baseball Injuries (the latter being perfect for the fantasy sports fanatic).

Backed by Microsoft co-founder Paul Allen and led by former Overture Services exec Will Hunsinger, Evri’s semantic technology has evolved over the years as it moved from a Web site to mobile apps and now to Apple’s tablet computer.

Some are already calling the Evri app for iPad a “better Flipboard,” a reference to the wildly popular iPad app that displays news content in an easy-to-read format. Meanwhile, a review on Stark Insider calls Evri a “colorful” combination of Flipboard and Zite which “compliments your craze for headlines, social updates.”

“While others have attempted to replicate the concept, none can deliver on the promise because they lack the technological platform that makes Evri topical streams relevant and timely, with a depth and breadth unmatched by simpler aggregators and RSS readers,” said Hunsinger in a release.

Here’s a look at the Evri execs talking about the free iPad app.