More than five years ago, Mike Fridgen, Oren Etzioni and others transformed the way people purchased airline tickets on the Web by telling shoppers the best time to buy. Their Seattle startup, Farecast, sold to Microsoft for $115 million in 2008 and today serves as the backbone of Bing Travel. Now, Fridgen, Etzioni and some of the old Farecast investors and team are trying to do it again with Decide.

The Seattle company, launching today after nearly a year in stealth mode, has developed a new Internet shopping search service that instructs consumers on the best time to buy laptops, TVs or cameras.

Fridgen, the former vice president of marketing and product at Farecast, said that Decide’s ultimate goal is to eliminate “buyer’s remorse.” 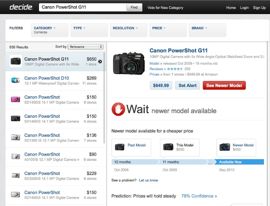 Anyone who has forked over hundreds or thousands of dollars for a tech gadget, only to learn that it was set to go on sale the next day or that a newer version would be released a month later, has probably experienced that feeling. Just think about the poor folks who bought an iPad in February, just a few days before Apple unveiled the iPad 2. Think they felt burned?

Decide is not yet tracking tablet computers, but that’s certainly on the roadmap. And Fridgen said that the technology behind the upstart– developed in part by University of Washington computer science professor Etzioni — could be applied to other product categories: cars, smartphones, groceries and more.

For now, the company is squarely focused on applying its predictive technologies to laptops, cameras and TVs. 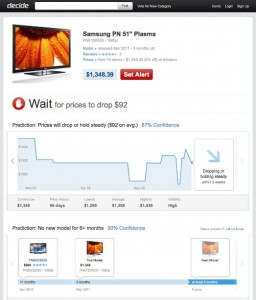 Prices on those products change frequently, causing confusion for consumers who aren’t sure if they are getting the best deal.

The problem is exacerbated by the number of rumors floating around tech blogs about the release schedules of new gadgets. There’s certainly a lot of keep up with, considering that Decide’s analysis shows that six laptops were released every day last year. (Interestingly, the startup is working on a weighting system to judge the accuracy of reporting by tech news sites).

With Decide, Fridgen said that consumers will gain intelligence to make sure they “buy the right product at the right time.”

In that regard, the offering is very similar to Farecast, which like Decide instructed consumers to buy or wait on a purchase.

Decide applies more than 40 factors into its algorithm, with Fridgen saying that it can predict with about 75 percent accuracy.

“It is not as clearly perishable (as airfare). But, there is a life cycle to its value,” Fridgen says of consumer electronic gadgets.

And, he notes, that the pain of a wrong decision can be much tougher to stomach.

“When you think about airfare, if you buy at the wrong time and you pay a little too much and you are on the middle seat and you are not happy about it, you get home and your forget about it,” said Fridgen. “If you bought the iPad 1 right before the the iPad 2 came out, you are no longer cool walking into conference rooms and throwing that down on the table.”

He adds: “Price matters, but being burned on the wrong product is painful.”

Consumers are already tracking prices of products online, with the company citing research that about 40 percent of Americans track prices daily of various products.

Tracking prices is not unique, with a number of online shopping engines offering that service already. What is unique, according to Fridgen, is the ability to offer predictions on prices and future product releases.

That’s something that Amazon.com and Google aren’t addressing, which he said have done a pretty good job of offering price comparisons.

“The problem of where to buy with comparison shopping is not something we are uniquely addressing,” said Fridgen. “You come to us to answer: Should I buy now or wait? Is there a newer version available right now at a cheaper price? Is the next version of this great product coming out soon?”

Google has taken a keen interest in the consumer electronics category in recent weeks. It purchased Seattle startup SparkBuy in May and just last week invested in a startup company called Shopobot.

Like Decide, Shopobot allows consumers to track consumer electronics gadgets, notifying them when it is the best time to make a purchase.

Fridgen said they’re obviously aware of Google’s recent moves. And while that’s certainly a concern, he’s confident that they can compete.

“We have a specialized team that has a lot of experience in this, and we understand how to solve this problem,” he said.

Decide.com also faces competition from new “buyback” programs from retailers like Best Buy, which is touting the ability to “Future-Proof your Technology” purchases.

Oftentimes, Fridgen said that those programs end up costing consumers more money in the long run. And he added that the national TV advertising campaign touting the program is just driving more attention to the problem that Decide is trying to address.

Decide plans to make money through referrals, passing consumers on to retailers like Wal-Mart or Amazon.com where they can make a final purchase. The referral fees run on average of about 70 cents in consumer electronics, higher than what Fridgen saw in the online travel business.

Fridgen said that the business model has some inherent advantages since consumers typically interact with Decide right before a purchase decision. That’s different than product review sites such as Cnet or shopping engines from Bing, Google or PriceGrabber.

“What we are all about is the moment of purchase, when to buy,” said Fridgen, adding that in the ecosystem there’s a constant “fight for the last cookie.”

That means the last site where the consumer goes before heading to Amazon or Best Buy gets credit and, more importantly, the referral fee.

The 20-person startup was founded under the name of PriceYeti by two sets of brothers: Brian Ma and Ian Ma as well as Hsu Ken Ooi and Hsu Han Ooi. They got linked up with Etzioni and eventually raised cash from some high-profile backers in the Seattle area.