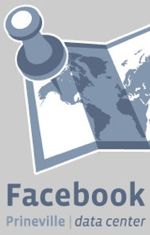 For the longest time, I assumed that Facebook chose Prineville, Oregon for its new data center because of hydroelectric power.

After all, Google, Microsoft, Dell, Intuit and others established massive data centers in the region because of cheap electricity derived from the Columbia River. But The Economist interestingly points out that Prineville — located in central Oregon about 90 miles from the Columbia– actually derives most of its electricity from coal.

Say what? So, why did the social networking powerhouse choose central Oregon for its expanding data center operation?

The Economist notes that Facebook’s Prineville facility is pioneering a new type of cooling technique which draws on the cold night air of the desert to keep servers cooled.

Seattle reporter Glenn Fleishman — who authored the piece and is working on a series of stories for The Economist– writes:

It does away with expensive air-conditioning “chillers.” Instead, air is brought in from outside. For this approach to work, however, the desert is key. For much of the year outside air is actually cool enough to keep the servers from overheating. At the lowest temperatures, just the gentlest of breezes needs to be brought inside at all. And, this being the desert, nights are chilly irrespective of the season, so even in the summer additional cooling is only needed during the hottest times of day.

The piece goes into great detail on how the system works, including how dust storms, grass fires or volcanic blasts could require the facility to shut off the cool-air intake systems. A recent insect infestation of “Biblical” proportions also caused some crafty workarounds.

Worth a read. Check it out here.