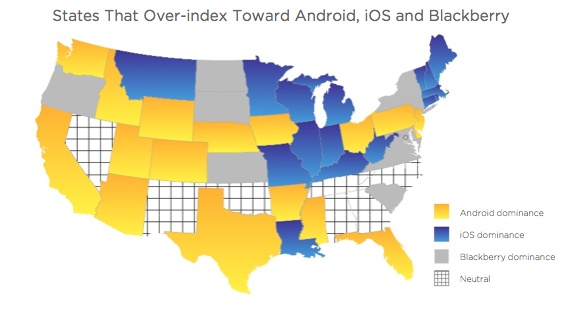 Computer geeks used to ask one another whether they were a Mac or PC. But, these days, you’re more like to hear this question: Android or iPhone? A new report out from mobile ad network Jumptap digs into that issue, breaking down whether you’re more likely to find Android or iOS users in Idaho (leans Android) or Indiana (leans iOS) and the other 48 states.

Interestingly, Washington state — home to Microsoft and its Windows Phone 7 operating system — leans Android. Oregon, meanwhile, was one of the few where BlackBerries still rule the roost.

Based on the map above, it looks like the next battleground in the smartphone wars will be in the south where many states lean neutral. (Anecdotally, we’ve been noticing that a larger percentage of the guests on our podcast, who we regularly ask what device they use, are carrying Android phones).

As TechCrunch notes, the map is based on Jumptap’s own mobile ad network traffic. And, once again, the data shows just how much ground Microsoft has to make up in order to get back into the discussion when it comes to smartphones.