You’d think by this time Microsoft might have regained some of its mojo in mobile. But the latest report from comScore indicates that the company’s Windows Phone 7 mobile operating system has yet to catch on. Microsoft’s market share for smartphones slipped from nine percent to 7.7 percent between November and February, while Google’s Android jumped seven points to 33 percent of the market. Apple, whose iOS platform powers the iPhone, was relatively flat at 25 percent of the market. (Full chart below). 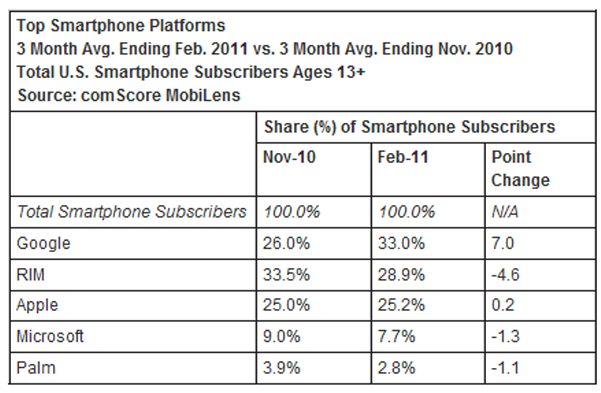 The report comes out a day after Microsoft reportedly accused Apple and Google of inflating the number of apps now available on their mobile platforms. InformationWeek reports that Brandon Watson, Microsoft’s Windows Phone director, wrote in a blog post this week that Microsoft is focused on quality over quantity when it comes to apps.

“We recognize the importance of getting great apps on our platform and not artificially inflating the number of actual apps available to customers by listing ‘wallpapers’ as a category, or perhaps allowing a competitor’s apps to run on the platform to increase ‘tonnage,'” wrote Watson, which InformationWeek said was a possible reference to the fact that RIM’s PlayBook will run Android apps.