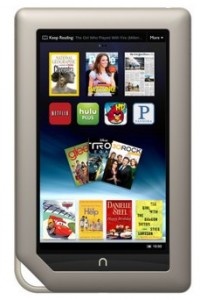 Seeking to justify the $50 premium, Barnes & Noble CEO William Lynch pointed to factors including the Nook Tablet’s 16 GB of built-in storage, which compares with the 6GB available for media storage on the Kindle Fire (out of 8GB total).

The Kindle Fire’s storage is “deficient for a media tablet,” Lynch said, according to a Wall Street Journal report.

Lynch also touted the ability for customers to get support for the Nook Tablet in Barnes & Noble stores. “If you wanted to get support with the Fire, where would you go? Amazon’s headquarters in Seattle?” he said, according to a Slashgear post.

Based on its hands-on assessment, CNet says the Nook Tablet “immediately becomes the first real challenger to the Kindle Fire in the emerging bargain tablet arena.”

Barnes & Noble also dropped the price of its Nook Color to $199, and reduced the Nook Simple Touch e-reader to $99, trying to better compete with Amazon’s Kindle lineup. Amazon leads the market for dedicated e-readers and has reported higher-than-expected demand for the Kindle Fire.

Kindle Fire will be available on Nov. 15. Nook Tablet comes out on Nov. 18.