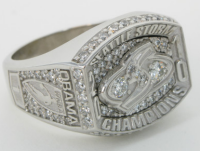 Barack Obama has some new bling, courtesy of the Seattle Storm and Seattle online jewelry retailer Blue Nile. In a White House ceremony on Wednesday, the Seattle Storm received congratulations from President Obama for winning the 2010 WNBA championship. As part of the ceremony, the white gold championship ring, developed by Blue Nile and valued at about $5,000, was presented to President Obama. Obama’s ring features the numeral 1, which Blue Nile said was meant to symbolize “his position as leader of the free world.”

It is not every day that you see a product from one of Seattle’s Internet or technology companies end up in the hands of the president.

You can see a full photo gallery of the Storm’s visit to the White House here. In one of the shots, Obama is smiling as he holds a Storm jersey across his chest. However, noticeably absent from the photo is the prominent Bing logo that typically adorns the jersey. (I’d be curious if that was done by design or just a missed marketing opportunity for Microsoft’s search engine).

UPDATE: A Seattle Storm spokeswoman tells GeekWire that the president was holding up the back of the jersey in the photo shoot (the front side shows the Bing logo).

Previously on GeekWire: Seattle Storm gets some bling, partners with Blue Nile on championship ring