Next time you’re facing an avalanche, you may want to make sure your Android phone is securely in your pocket. A new mobile application called FitClimb features a built-in clinometer, an instrument used to measure slopes and vertical angles (critical calculations in determining avalanche risk).

The app was developed as a hobby by Seattle area developer Ali Alami after he lost his job at Globalscholar. A climber and hiker, Alami said that he wanted an easy (and lightweight) way to reference avalanche information while in the mountains.

“Even after taking safety courses and reviewing safety books before the trip, on the mountain I felt like I was missing some risk factors in reading the conditions,” Alami tells GeekWire. “I didn’t just want a book on my mobile (device) but a quick assessment tool.” 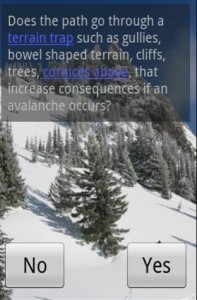 Alami released the $2.99 app a few weeks ago, and since then he said it has been well received within the niche community of outdoor enthusiasts.

Alami grew up in Chicago and joined the Air Force after high school to become a Survival Evasion Resistance Escape instructor, basically teaching pilots how to survive if they were ever forced to eject. Some of that old instructor training is found in the app, including questions about how to avoid and survive avalanches.

The former Expedia employee partnered on the app with his wife, Sirima, and a developer friend, Philippe Sekine.

But he hasn’t had much time to use it on climbs in the mountains himself, since he’s been busy with his 14-month-old son. Perhaps the best reason to be prepared in case an avalanche hits.