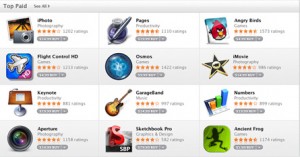 We’ve been writing a lot lately about the rise of Android, with some estimates showing that Google’s mobile operating system now accounts for the majority of smartphone sales. But market share only tells part of the story. A report released this week by Piper Jaffray shows that Apple is still the place to be for those developers who want to make money off their mobile applications.

According to the report, rouoghly 85 percent and 90 percent of the total dollars spent on mobile applications occurs within Apple’s iOS environment. In fact, Gene Munster of Piper Jaffray notes that iOS app developers have made more than $3.4 billion this year.

That compares to just $239 million for Google app developers. Interestingly, Munster found that just 1.3 percent of Android apps are paid, while 13.5 percent of Apple apps have a price tag.

The findings seem to mirror comments made by Seattle mobile app developer Michael Schneider who noted on the GeekWire podcast in August that his apps sell better on the iPhone than they do on Android devices.

“I’ve (developed) apps on both platforms. Same app, same functionality, they sell better on the iPhone than they do on Android, and to me that tells me that Android users either they’re getting bad experiences with apps and not buying them, or maybe they haven’t been educated the way iPhone users have to open their pocketbooks and start buying,” said Schneider.

Even though Apple remains the undisputed king of paid mobile apps, Todd Ogasawara at Inside Mobile Apps finds fault with Piper Jaffray’s analysis. He notes that the report fails to analyze revenues made through in-app purchases and it underestimates the install base of Android devices by more than one billion.