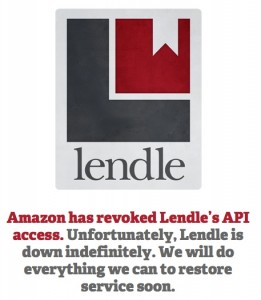 Electronic book lending service Lendle may be entering its last chapter. Amazon.com today revoked API access to the company, essentially killing a service once described as the “easiest, fastest, fairest, and best way to lend and borrow Kindle books.”

Lendle informed its customers earlier today in a Tweet which read:

Amazon has revoked Lendle’s API access. This is why the site is down. It’s sad and unfortunate that Amazon is shutting down Lending sites.

Visitors to the company’s Web site also are greeted with a grim message, which says in part that the site is down “indefinitely.”

The move is sparking some outrage among Lendle customers who used the application to loan electronic books to friends.

“It’s official, @amazon takes home the trophy for “dumbest business move of the day” for shutting down @lendleapp,” wrote one user on Twitter.

Lendle co-founder Jeff Croft — who happens to be based in Amazon.com’s hometown of Seattle — tells Cnet that the site is “mostly useless” without the Amazon.com API.

And, in a follow-up Tweet about an hour ago, Lendle suggested that other e-book lending services might be cut off too.

We’ve written in the past about the dangers of building services on the back of larger platforms. Lendle appears to be experiencing this first hand.