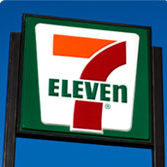 Brick-and-mortar retailers like Walmart and Best Buy already allow customers to pick up online purchases at physical stores. Now, Amazon.com is reportedly giving that concept a shot through a partnership with 7-Eleven.

The Daily reports that Amazon is testing a new delivery locker that would allow customers to pick up their packages at the stores. (And maybe a Slurpee and Slim Jim too).

Apparently, the locker system — described as a P.O. Box of sorts — is being tested at a 7-Eleven store in Seattle’s Capitol Hill neighborhood.

We’ve yet to see it. So, if any GeekWire readers have tested this out or know where it is, please let us know. (Also, send a photo if you happen to find this specific location).

Here’s more from The Daily on how the locker system will work.

When the package is actually delivered, the customer receives an email notification along with a bar code to his smartphone and heads to the 7-Eleven. There he’ll stand in front of the locker system, which looks like the offspring between an ATM machine and a safety deposit box. The machine will scan the bar code on his handset to receive a PIN number. He’ll punch that PIN number and retrieve the package.

This wouldn’t be the first time that a Seattle tech company has partnered with 7-Eleven. Just last month, T-Mobile announced that it has begun selling a $30 cell phone at more than 6,000 7-Eleven stores.

It is unclear how quickly the Amazon orders will arrive at 7-Eleven. Walmart’s Site to Store program — which allows customers to select a store where they want packages dropped — promises orders will arrive in stores in five to eight days.

At least in Seattle, Amazon has the benefit of its own trucking fleet which is already delivering groceries to customers’ homes via the Amazon Fresh service.

Could those drivers simply add a 7-Eleven each day to their route?