Those were my takeaways testing out the mobile voting pilot available to all voters in the greater Seattle region Tuesday. More than 1.2 million Seattle-area voters have the option to cast their ballots online in a little-known election for the Board of Supervisors of the King Conservation District, a resource-management organization operating under state authority.

To cast my ballot online, I visited the King Conservation District website on my smartphone. The first page explained my options for voting, including casting my ballot online. It also included an infographic detailing how this mobile voting pilot is different from the app that malfunctioned during the Iowa Democratic caucuses last week. 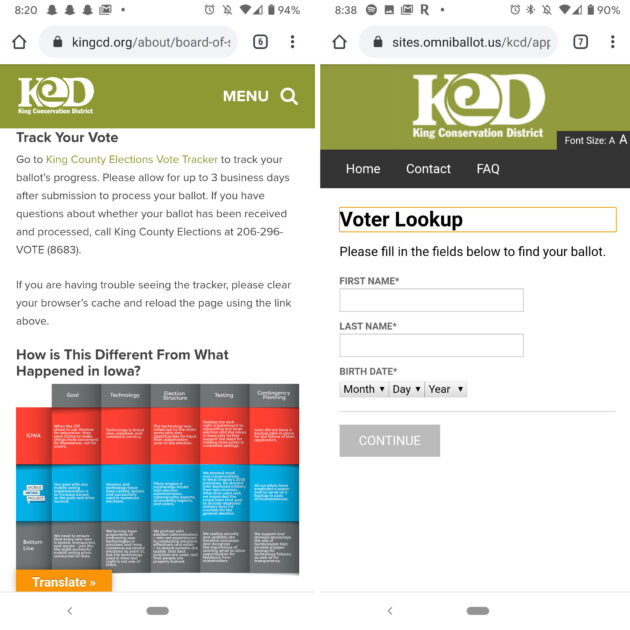 Clicking “Vote Now” led to a series of prompts within the web browser on my phone. First I reviewed the sample ballot provided. Then it was time for the main event.

I entered my name and birthday to verify my identity. I tapped a checkbox next to the name of my preferred candidate, confirmed my choice, and advanced to the signature page. I scrawled my name using the touchscreen, just as I do most mornings at the corner coffee shop when the barista flips the point-of-sale iPad over to me. I tried to make my signature a bit tidier than the usual touchscreen scribble. Civic engagement calls for a certain level of fastidiousness.

After reviewing my ballot, I hit submit and received a tracking link where I can check in on my vote in three days. The whole process took less than five minutes. Just like that, we’ve entered a brave new world in which voting is easier than ordering dumplings on Uber Eats.

The speed and convenience of mobile voting is undeniable. It’s easy to see how it could increase voter turnout. But there will always be folks who sit small, local elections out. My husband, for example, probably won’t vote in this one. Could that become an opportunity for fraud?

I decided to find out.

In an incognito window, I filled out the simple information required to access the mobile ballot: His name and birthday. I was in. Following the same steps as before, I made it all the way to the finish line. Don’t worry, I didn’t commit voter fraud for the sake of this story. I bailed before submitting the final ballot.

As beneficiaries of Washington state’s vote-by-mail system, this wasn’t my first opportunity to vote on my husband’s behalf. But there’s a key difference. My nefarious career in voter fraud is limited to one victim when ballots are mailed to our door. Unless I expanded my criminal enterprise to include mail theft, I wouldn’t have access to anyone else’s ballot.

With mobile voting, I could theoretically fish for the unmarked ballots belonging to anyone whose name and birthday I have. That could be an opportunity for foreign agents seeking to weaken American confidence in elections or the die-hard supporters of a candidate hoping to boost her chances. 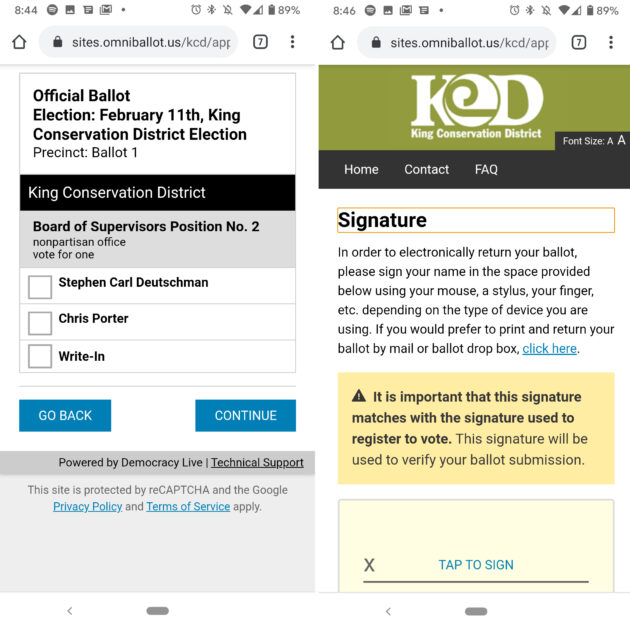 I caught up with Democracy Live CEO Bryan Finney on the morning of the King County election to ask about what I discovered. Democracy Live is a Seattle-based company that built the mobile ballot for the King Conservation District election. He said the risk of imposters is low because King County election officials compare the signatures voters submit against their voter registration forms. Any fishy inconsistencies get flagged.

“They’re not going to lower the standard of fidelity and that’s why we’re starting small, with this smaller election, to really measure what that level of fidelity is and how it compares to signing on the kitchen table,” he said.

But anyone who has signed for a purchase using a phone or tablet knows the result rarely resembles a hand-drawn signature.

“That means either many votes will be invalidated, or they will be taking a very loose approach to the signature validation — neither of which is good for democracy,” said Zachary Cohn, an entrepreneur who advises companies and individuals on best security practices online.

The King Conservation District election is getting national attention because of the novel voting method. Washington state has long been a pioneer in voting innovation, allowing all residents to vote by mail using paper ballots. Today that tradition expands to mobile voting, though the process is still underpinned by paper. After voters select their choice online, a paper ballot is printed and tabulated with their selection.

Though paper ballots are generally considered best practice for election security, the mobile voting pilot is still raising concerns in the security community. Reticence about mobile voting is particularly acute following the Iowa caucuses last week, in which results were fumbled and delayed because of a malfunctioning tabulation app.

But the organizations behind King County’s mobile voting rollout are plowing ahead, and insisting that what happened in Iowa has nothing to do with this pilot. There are key differences between the Iowa Democratic Party and the King Conservation District’s approaches, but both raise questions about the security risks of high-tech elections. It’s an acute concern in this year’s U.S. presidential election, with Russian cyberattacks in 2016 fresh in voters’ memories.

“Unless we start now and start small, start responsibly, we’re never going to get there,” he said. “That’s, in part, the intent of this, to better secure ballot transmission and start to speak the language of the next generation of voters.”