Microsoft’s Surface hardware business reached an all-time high of nearly $2 billion in revenue for the December quarter, but the company indicated that the result would have been higher if not for unspecified “execution challenges” in the consumer side of the Surface business. 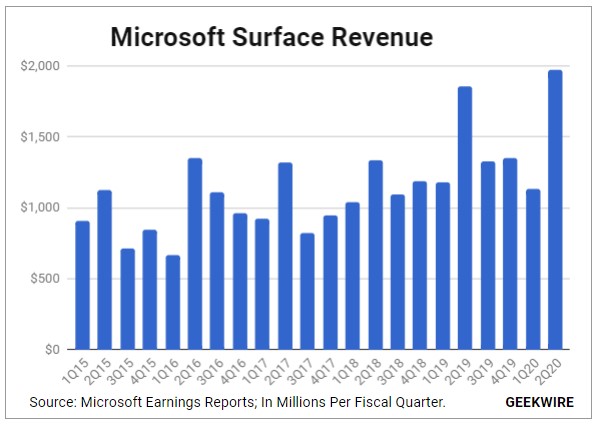 The company said the quarterly revenue of $1.98 billion in the Surface business fell short of its internal expectations, indicating a less-than-stellar holiday shopping season for the Surface lineup.

That’s a surprise in part because Microsoft’s big product unveiling prior to the holidays generated lots of positive buzz from the media. However, two of the biggest products it unveiled at the time, the dual-screen Surface Neo and Duo, aren’t due until later this year. And more to the point of missing expectations, the company subsequently delayed the release of its new $249 wireless Surface Earbuds to spring 2020.

Product-making is about the relentless pursuit to get all the details right, which takes time…sometimes more than we planned on. To ensure we deliver the best possible experience for you, our fans & customers, Surface Earbuds will now launch worldwide in Spring 2020 #Surface

Hood indicated later on the earnings call that Microsoft hasn’t gotten past those challenges yet: “In Surface, we expect revenue growth in the low single digits as we work through the execution challenges in the consumer segment.”

Microsoft hasn’t yet provided further details on the nature of those challenges, and whether they extend beyond the Surface Earbuds delay.

Curious if Microsoft, when referring to "execution challenges", meant Surface Earbuds? I forgot those are delayed until sometime in spring 2020.

Earlier this week, Apple credited growth in AirPods and Apple Watch sales for fueling a 37% increase in its Wearables, Home and Accessories segment, which surpassed $10 billion in revenue for Apple’s December quarter, or about 10 percent of Apple’s $91.9 billion in overall revenue for the quarter.

Commercial segments are Microsoft’s traditional strength. The company launched products including the Surface Pro 7 and the Surface Laptop 3 during the quarter.