We are in the thick of awards season. With the Oscars out of the way, the time has come for the next-most important awards contest of the year. That’s right, the GeekWire Awards are less than a month away.

So get your tickets for the event on March 26. And while you’re at it, go vote for your favorite nominee in each of the 13 categories. 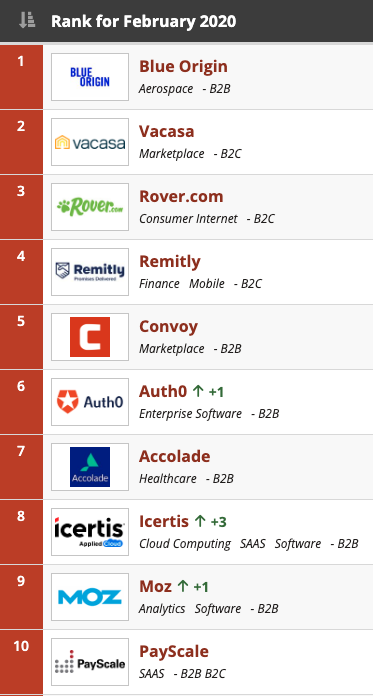 But this is more than just a shameless plug for the 12th edition of the awards. Looking at the finalists through the lens of the GeekWire 200, our ranking of the Pacific Northwest’s privately-held tech companies, reveals some interesting insights into the state of the region’s startup scene.

The GeekWire 200 includes startups from Washington, Oregon and Idaho, and British Columbia. The rankings are generated from publicly available data, including social media followings, approximate employee counts (via LinkedIn) and inbound web links.

Each month, we update the list and recap the month’s biggest movers and shakers. Here are a few other trends we’re seeing on the GeekWire 200 this month.

Hardware scene on the rise

Tight race in the top 10

The GeekWire 200 is derived from our broader list of more than 1,300 Pacific Northwest tech startups.

Thanks to everyone for checking out this month’s ranking. And, just a reminder, if you value resources like these, be sure to check out our list and map of out-of-town tech companies with Seattle engineering outposts as well as our list of startup incubators, co-working spaces and accelerators in the region, startup fundings, and our GeekWork job board.