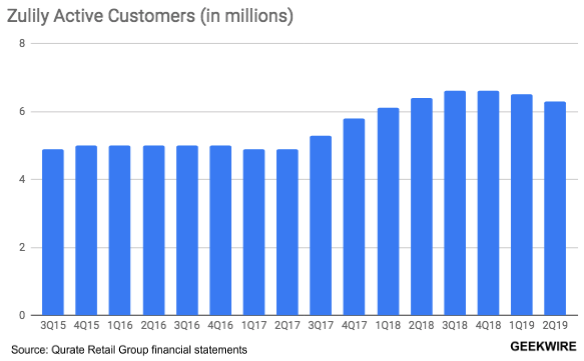 Zulily’s business is on the decline.

The Seattle-based online retailer saw revenue decrease 13 percent to $363 million during the second quarter, the largest year-over-year dip since the company was acquired by QVC parent Qurate in 2015.

Zulily’s active customer base also fell by 3 percent year-over-year to 6.2 million, and has decreased for two straight quarters. Its quarterly operating income before depreciation and amortization (OIBDA) fell from $29 million last year to $7 million.

The struggles come as Zulily slims down its staff. Last week GeekWire reported that the company made an undisclosed number of layoffs as part of a restructuring.

“Going forward, we remain focused on building on the collective strengths of QVC and HSN, realizing synergies and stabilizing Zulily,” he said in a statement.

Here’s more from the earnings report on Zulily:

“Zulily revenue declined due to lower unit volume driven by a decrease in new customers and lower purchasing frequency from existing customers, as well as lower ASP. Product categories that led the sales decline were apparel (kids and women), home and footwear. Zulily’s results were affected by less efficient customer acquisition spend on certain digital marketing channels and the impact of sales tax collection in additional states versus the prior year. Operating loss improved due to a decrease in purchase accounting amortization. Adjusted OIBDA declined primarily due to lower sales, higher supply chain expense and fixed costs associated with increased technology-related headcount.”

In a note sent to employees last week and obtained by GeekWire, Zulily CEO Jeff Yurcisin said the company was at “a critical inflection point” that required changes to the business. Yurcisin indicated that the layoffs affected the merchandising and studio teams and that the retailer would be increasing investments in technology and user experience.

Yurcisin, a former Amazon executive and Shopbop CEO, took over as CEO last year after co-founder Darrell Cavens officially stepped down from the role.

The retailer has been working on rebranding its e-commerce offerings, which historically centered around daily deals for moms with small children. In January, the company inked a jersey sponsorship deal with Sounders FC, a men’s professional soccer team in Seattle.

Before the layoffs, Zulily employed 3,500 people around the world as of January. In addition to Seattle and Columbus, Zulily also has offices in Reno, Nev., Bethlehem, Pa., and Shenzhen, China.