Zulily co-founder and former CEO Darrell Cavens is stepping away from the e-commerce company that he jokingly refers to as his “third child” ― for real this time.

Cavens abdicated his post as CEO nine months ago, but he remained very much a fixture at the office and in day-to-day operations under his role of leading new ventures for Qurate Retail Group, the parent company of Zulily as well as QVC and Home Shopping Network. Cavens helped recruit the company’s next leader, former Amazon executive and Shopbop CEO Jeff Yurcisin. And now with Yurcisin firmly in place, Cavens, who was also an early employee and executive at online jewelry retailer Blue Nile, is ready to ride off into the sunset, for the most part.

Cavens will stay on as an adviser for Yurcisin and Qurate CEO Mike George. But for the 46-year-old serial entrepreneur, who says he isn’t comfortable with the term “retirement,” his main priority will be spending time with his two human children, who at 10 and 12 are both just a little older than Zulily, which was founded in 2009 as a daily deals site with products for moms and kids.

“This one’s grown up a little faster than the other two,” Cavens said of Zulily. “But I want to make sure I catch some of the remaining years of the other two kids.”

Cavens is comfortable leaving now, as the company is in a good place. Zulily’s growth has taken off in the last year, after reporting flat customer activity and meager revenue growth for the first few years after it was acquired by Qurate, then known as Liberty Interactive, for $2.4 billion in 2015. For the last few quarters, its revenue growth is far outpacing both the parent company as a whole and other business units. And its customer base is on the rise. 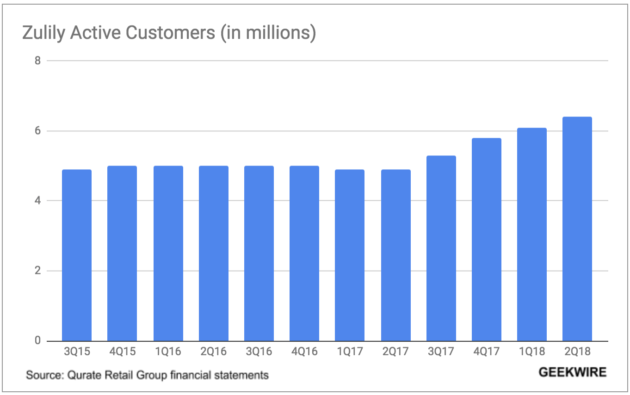 Zulily’s customer base sat at around 5 million for about two years dating back to mid 2015, when the acquisition occurred. But starting in the third quarter of last year, steady increases helped the company top 6 million users.

Revenue exceeded $400 million over the last two quarters, a figure Zulily had previously reached only during the holiday season since its acquisition, and the company has reported consistent double-digit annual growth over the last few quarters. Changing up the marketing focus from member sign-ups to encouraging customer purchases and connecting with existing customers drove the increased customer activity, the company has said. 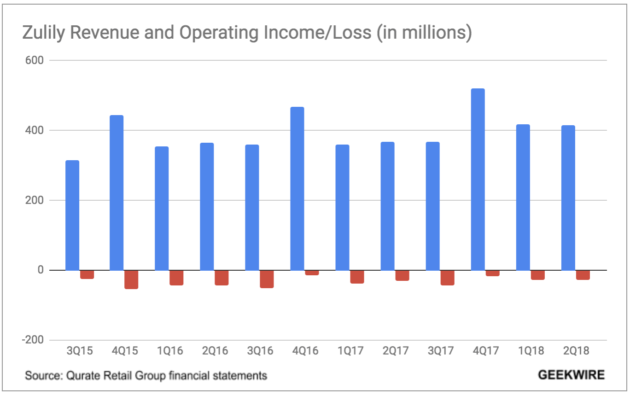 GeekWire met with Cavens and Yurcisin just moments after the former CEO announced to employees he was on his way out. As we walked the halls of Zulily’s massive headquarters in Seattle, formerly home to streaming media pioneer RealNetworks, employee after employee came up to congratulate Cavens and wish him well.

Cavens reflected on his time with the company while walking through a company timeline of its accomplishments, including a photo of an excited Cavens when the company went public in 2013, with his kids by his side as he rang the opening bell. He fondly recalled writing some of the original code on the site (PHP, Java and MySQL), which he promised has long since been replaced, and setting up shop in the back of VC firm Maveron’s offices when Zulily was little more than an idea.

It’s been a wild couple of years for the company. It was one of the fastest-growing online retailers and skyrocketed through a successful IPO. But its stock sunk significantly thanks to a series of earnings misses before it was acquired.

Cavens called leading a public company an “incredible experience,” while also saying it is “one of those things that ages you.” Being under the larger umbrella of Qurate, Cavens says, has been good for Zulily because it allows the company to focus on the future.

“They focus on the long-term, and their message to me from day one was we want to build a great long-term business,” Cavens said of Qurate’s leadership. “We don’t want to just chase quarter to quarter. We want to make sure that we’re building credible long-term shareholder value.”

Zulily’s headquarters, the company’s fifth office in its nine years of existence, is full of photo and video studios where products are photographed for the website, with rows of desks for coders and other employees. We tip-toed around boxes of DKNY clothing, sat in makeup chairs where nearby child models were getting ready for their closeups and weaved through photo and video studios.

Zulily can sometimes be forgotten in discussions about top Seattle tech companies. But it is a huge employer — with 3,500 people around the world, including 1,300 in Seattle. It also has a major office in Columbus, Ohio, with a nearby distribution center and other warehouses near Las Vegas and in Bethlehem, Pa.

The company has increased its technology headcount dramatically in recent years. Zulily has approximately 125 open positions on its job board.

Yurcisin has spent the past 14 years as an executive and director at Amazon, leading several of the company’s clothing retail efforts. He was most recently the VP of Softline Private Brands, Amazon’s private fashion labels, and formerly served as the VP of all Amazon clothing. He also spent seven years as the CEO of subsidiary Shopbop, an online clothing retailer that Amazon bought in 2006.

Yurcisin says the company will continue to up its tech offerings. The front page of the site is different for pretty much everyone who pulls it up, as Zulily customizes the experience based on past actions.

In order to experiment with this, the company has internal settings that let employees see what the site looks like for various executives, including Cavens. He just moved into a new house with a gym space and recently bought some equipment, so when we got to see the front page through his digital eyes, fitness equipment was front and center.

Cavens said he’d pursued Yurcisin for some time. His resume, in a world without a lot of big e-commerce players yet, was a unique fit for Zulily.

“If you look at e-commerce businesses in the US, particularly in the apparel space, that have scaled, you might be able to count them on one hand,” Cavens said. “There’s just not that many. And so to find someone who has had years of experience both within Amazon as well as having run their own business there, those two things just don’t exist together.”

Yurcisin cited the “magic” of the studios and the artistic but go-getter culture at Zulily as reasons he took the job. He said the company aspires to lead a third type of commerce, beyond brick and mortar and “transactional e-commerce,” a group Yurcisin puts Amazon in.

Thanks to Amazon, rapid shipping has become a huge part of the e-commerce world. Zulily has been dinged in the past for not keeping up with speedy shipping trends.

Cavens explained that Zulily isn’t in the market of essentials that people need right then and there. And while the company has worked to increase the pace of its distribution, customers say they are willing to wait a little longer to save some money on shipping costs.

“Amazon has taught all of us to believe that two-day shipping is the norm,” Yurcisin said. “I’d argue that as e-commerce continues to mature, there are going to be a lot of different business models that can thrive and there will be customers who make different trade offs between value and price and speed and the way that we show the product in a discovery rather than a transactional kind of format.”

Yurcisin will be surrounded by a veteran leadership team that includes Lori Twomey, the company’s second employee and chief merchant who stepped in to fill the top executive position when Cavens resigned as CEO. As for Cavens, he’ll still take the occasional meeting, but he draws the line at putting recurring get-togethers on the calendar.

Cavens has long been an angel investor in Seattle, and he will continue doing that. He said he’s been extremely fortunate in terms of landing investments for his companies and finding great mentors. Continuing to invest is a way he can give back, both financially and by sharing his experience with the local tech community.

Cavens has been in Seattle since 1993, and he says he couldn’t imagine building Zulily anywhere else. He said the city is an easy place to draw workers to because people want to live in Seattle, and it has a strong talent pool in town to pull from as well.

The long-time entrepreneur will start his new chapter after this week, but he didn’t shut the door entirely on doing something else in the future.

“I am the kind of person that when I’m in something, I’m all in, and so I don’t think there’s an ability for me to do something part time,” Cavens said. “I really struggle to see me doing something next, but we’ll see. I never want to say what five years from now looks like.”