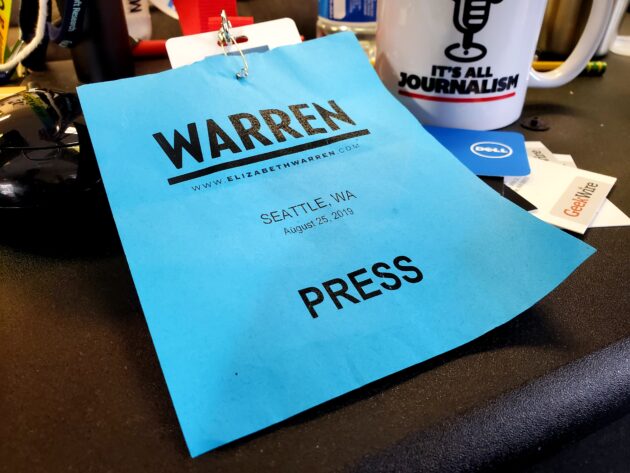 U.S. Sen. Elizabeth Warren appeared in Seattle on Sunday, a few blocks from Amazon’s headquarters, and given the Democratic presidential candidate’s call to break up the online retail giant as part of a larger crackdown on big tech companies, we were anticipating fireworks. It didn’t happen. In fact, as we reported earlier this week, Warren didn’t specifically mention Amazon in her public remarks when commenting on the need for stronger antitrust enforcement.

On this episode of the GeekWire Podcast, we tell the behind-the-scenes story of how we were able to ask Warren about the issue by matching her sheer endurance, outlasting the four-hour line of people who waited to take selfies with the candidate after her appearance.

When we finally did speak with her, Warren pulled no punches in discussing Amazon.

She added, “This online platform really creates an opportunity that Amazon has taken advantage of and it’s hurt a lot of little tiny businesses and startup businesses and small businesses and medium size businesses that can’t compete with a giant like Amazon that is sucking information out of every transaction. Information is today’s comparative advantage and Amazon shouldn’t be able to suck it all up and then dominate every single marketplace in America.”

So why didn’t she take on Amazon directly in Amazon’s backyard? “I was here to talk about why I’m running for president. … I at least had the passing reference to the fact that we’ve got to break up the big companies. We’ve got to enforce our antitrust laws.” However, she added, there’s “a lot of stuff we’ve gotta do.”

And that last comment explains a lot. A Hill-HarrisX poll conducted earlier this year found that a majority of Americans aren’t interested in tougher regulations for big tech companies.

Although Amazon and big tech companies have been a target in the Democratic presidential debates, there are a lot of topics on the minds of voters and candidates, as well-known open-source technology leader Miguel de Icaza pointed out in his reaction to our coverage of Warren’s appearance.

Yes, just not the top issue. I wasn’t there but wouldn’t be surprised that she didn’t even hit half this (already outdated) list of top proposals. pic.twitter.com/OnH931Z7cr

In the end, my only regret was that I didn’t think to take a selfie with Warren myself.

Also on this episode, GeekWire’s Kurt Schlosser and Taylor Soper join me to discuss privacy concerns over Ring’s collaboration with law enforcement; the new trailer for Netflix’s Bill Gates documentary, what the algorithms say about an iconic Nirvana song; and, of course, the latest on the elusive Popeyes chicken sandwich.