“The vision is to build an entire ecosystem around what it means to be a cannabis business,” Tindall said. “By putting our softwares together we now have a full stack, a fully integrated offering, and that doesn’t really exist yet — not from the grower all the way to the retail plant sale … there isn’t anyone who is doing the end-to-end product suite at this point.”

Soro brings to Dauntless its analytics and customer relationship management sales software, which connects growers and packagers. Soro will keep its brand name for now, Tindall said. Dauntless, which launched in 2013, provides traceability and compliance for growers, as well as point-of-sale, compliance and inventory management software to retailers.

The vision is to build an entire ecosystem around what it means to be a cannabis business.

Dauntless co-founder and CEO Clark Musser, who left Microsoft to launch the startup, said between 30 and 40 percent of all the state’s retail pot transactions go through his company’s retail software.

Executives at both Soro and Dauntless, both private companies, declined to disclose the terms of the all-stock deal. All four of Soro’s employees will join Dauntless, making for a total of 33 employees.

Soro will bring about a dozen customers to Dauntless, which has roughly 120 customers. The Dauntless executive team includes vets from Microsoft, Amazon, and Starbucks. The combined company plans to pursue between $5 million and $10 million in a Series A funding round, Musser said.

The acquisition comes especially fast for Soro, which came out of beta only a year ago. Tindall said the company bootstrapped itself, foregoing a formal investment round and taking a $25,000 investment from Tindall’s dad to cover the bills.

“Yeah, we worked hard,” Tindall said of the breakneck timeline from launch to acquisition.

With today’s acquisition, Soro and Dauntless are trying to capitalize on what is seen as sky’s-the-limit opportunity in a young and burgeoning legal cannabis industry that is hungry for customized software solutions. 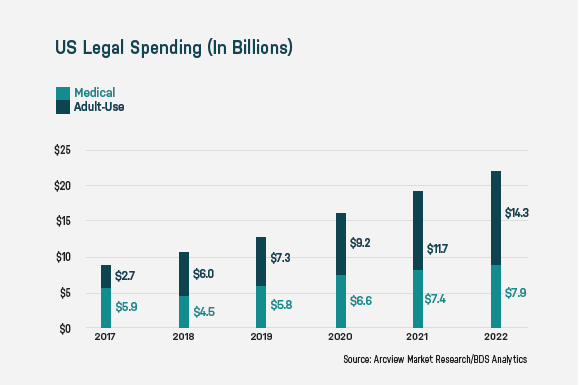 There are 87,000 cannabis business in the U.S., Musser said. BDS Analytics, which tracks the legal pot market, said U.S. consumers spent more than $10.5 billion on cannabis for both recreational and medical uses in 2018. Recreational pot spending more than doubled from $2.7 billion in 2017 to $6 billion last year as more states legalized cannabis, BDS said. The company said recreational pot is likely to be a $14.3 billion market by 2022, with the medical pot market growing from its current $4.5. billion to $7.9 billion.

Patrick Rea, CEO and co-founder of CanopyBoulder, a venture fund that invests in the pot industry, said that leaves plenty of opportunities for companies like Dauntless to grow, especially if it can improve on the existing models.

“The growth opportunity for these seed-to-sale software tracking companies is probably larger than the growth of the industry overall because so many new businesses are coming online,” he said.

In a recent report, New Cannabis Ventures said that, of the 44 point-of-sale software vendors it counted in the cannabis industry, only five make up 80 percent of the sector’s market share. The biggest is BioTrack, with Green Bits a close second followed by Flowhhub, MJ Freeway, and Adilas.

“If you can do better, there’s reason for you to play in the space,” Rea said. “The need for better solutions is greater than any market share that any of the top (cannabis software) companies has. The industry is hungry for better.”

And there’s plenty of room for improvement.

Last year, Washington state enlisted a new cannabis traceability system called Leaf Data Systems, which has been plagued with problems, including businesses being unable to log in, scrambled orders and missing shipping manifests. The system has also fallen victim to hackers, compromising data and creating even more havoc across the state’s pot businesses.

Executives from both Soro and Dauntless, who did not know each other well at the time, said they found themselves exchanging pained glances during a 2017 Washington State Liquor and Cannabis Control Board meeting about implementing Leaf’s system, which wasn’t yet ready and still lacks key features promised by Leaf, Tindall said.

Tindall said he and the Dauntless executives began talking about merging as they discussed their “shared misery” caused by the state tracking system at industry events.

The merger made sense, they said, because the cannabis business is still fragmented, and software platforms for large-scale agriculture operations are often ill-suited to fit the unique needs of pot operations.

“The different people in the supply chain, they all get stuck in their little silos,” Tindall said.

To solve that problem, Dauntless has developed a platform called GIANT, which stands for “Global Interoperable Application Network Technology.” Musser said GIANT has a universal API that can connect every cannabis business — grower, packagers and retailers — as well as regulators, regardless of different state tracking systems. Instead of modifying software for each state regulatory environment, only one adjustment is needed in GIANT, Musser said.

This month, Dauntless was showing off GIANT at Seattle’s CannaCon, the country’s largest cannabis industry event. Late last month, Dauntless announced that Leafly, the Seattle company that publishes a directory of where to buy pot and gets more than 16 million visitors to its site each month, will begin using GIANT to update retailers’ menus of cannabis products.

Tindall said the combined companies, quite ambitiously, want to “create the most transparent and connected industry on earth.”

“The goal is to create a better industry,” he said, adding later, “this is us responding to a need that exists globally.”