Seattle, San Francisco and other tech hubs are capturing a growing percentage of innovation jobs in the United States, according to a new Brookings Institution report. This “crisis of regional imbalance” is already having grave economic, social, and political consequences, the researchers found.

Just five metropolitan regions — Seattle, San Francisco, San Jose, San Diego, and Boston —  accounted for more than 90 percent of job growth in the innovation sector between 2005-2017, according to the report. Meanwhile, the remaining cities in the country lost about one-third of the nation’s tech jobs over that time period. More than half of U.S. tech jobs are now concentrated in just 41 counties, the study found.

The consequences of this stratification are being felt in Seattle and other top cities for tech jobs.

“These range from spiraling home prices and traffic gridlock in the superstar hubs to a problematic ‘sorting’ of workers, with college-educated workers clustering in the star cities, leaving other metro areas to make do with thinner talent reservoirs,” the report says.

Tech concentration is driven by handful of factors, and tends to be self-reinforcing, according to the report. Cities like Seattle, for example, have major job creators like Amazon and Microsoft which spawn startup ecosystems of smaller tech companies. The city also has a major research institution in the University of Washington, which continues to feed the talent pipeline. In other cities with major universities but fewer tech employers, talent is often exported. 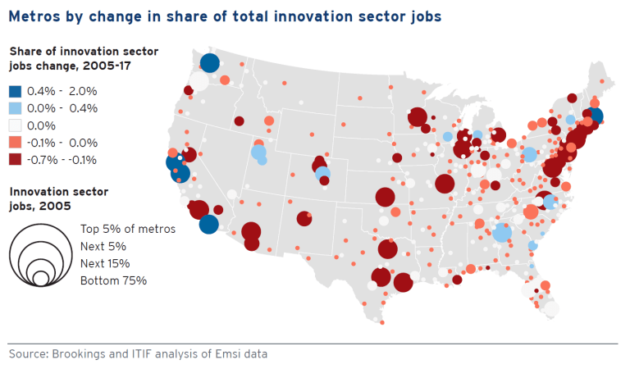 The concentration means that just a handful of cities are benefiting from one of the most economically productive industries in the world. High-tech jobs account for 6 percent of U.S. economic output, even though they comprise just 3 percent of all jobs in the nation, according to the New York Times.

The report is authored by Mark Muro and Jacob Whiton of Brookings and Robert Atkinson of the Information Technology Innovation Foundation, which receives funding from tech companies.

The top five cities for tech job growth now account for 22.8 percent of the nation’s total tech jobs, up from 17.6 percent in 2005, according to the report. The widening divide has social and political repercussions, as well as economic ones.

Brookings attributes shriveling economic opportunities in many regions across the country to growing polarization in Washington D.C. The same dynamics are often attributed to the swelling tide of populism that President Donald Trump rode to the White House in 2016.

The report calls for a comprehensive government program to boost the tech sectors in regions that have been left behind. Brookings envisions 10 “growth centers” across the country in regions where tech job growth is stagnant or nonexistent. The designated regions would receive research and development funding of up to $700 million from the federal government over 10 years, as well as workforce development funding and tax benefits. Brooking estimates the decade-long program would cost $100 billion.

“That is substantially less than the 10-year cost of U.S. fossil fuel subsidies,” Brookings notes.

Absent that type of intervention, tech jobs will continue to grow more concentrated in a handful of “superstar cities,” the report’s authors claim.