Microsoft’s embrace of cloud computing continues to pace its growth, as revenue from several key cloud products made steady gains during the last quarter of the calendar year.

For the period ending Dec. 30th, which is Microsoft’s second fiscal quarter, revenue from its Intelligent Cloud division — which includes Windows Server, Azure, and its services teams — grew 20 percent to $9.4 billion. That was once again the fastest growing segment of Microsoft’s business lines, helped by 76 percent growth from its Azure public cloud service. 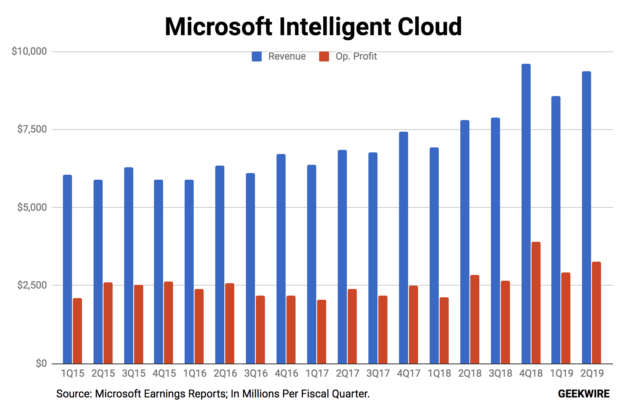 Another closely watched metric is Microsoft’s commercial cloud revenue, which includes Azure, revenue from sales of software-as-a-service products like Office 365 to business users, and its Dynamics business. That number hit $9.0 billion during the quarter, a 48 percent jump compared to the prior year.

Microsoft yet again declined the opportunity to shed more light on how much revenue Azure, the second-leading infrastructure cloud service, generates for the company. Growth slowed last quarter, but has now held steady at 76 percent for two quarters, and that’s still pretty good.

The company recorded $3.9 billion in capital expenditures during the quarter as it continues to invest in its cloud business. That’s down slightly from the $4.3 billion the company spent in its first fiscal quarter, and comes after Intel executives last week said cloud providers were slowing their purchases of new chips from the company.

On the larger front, overall Microsoft revenue missed analyst expectations by a fraction, which initially sent its stock down in after-hours trading but the price recovered strongly as Microsoft executives made their remarks during the call.