Quarterly revenue in Microsoft’s main cloud segment surged to $11.4 billion, topping each of the tech giant’s other major divisions for the first time under its current financial reporting structure.

While the Intelligent Cloud division includes traditional server software in addition to cloud services, the outcome is a symbolic milestone for a company that originally built its business on PC operating systems and productivity software. The result reflects Microsoft’s long-term effort to expand its business beyond its traditional technology products.

The revenue increase of 19 percent in Intelligent Cloud continues the division’s status as the company’s fastest-growing segment. The result was driven by an increase in sales of server products and cloud services, the Redmond company said in its report Thursday afternoon for its fourth fiscal quarter. Intelligent Cloud includes the Microsoft Azure cloud platform as well Windows Server, SQL Server and related products for businesses and developers. 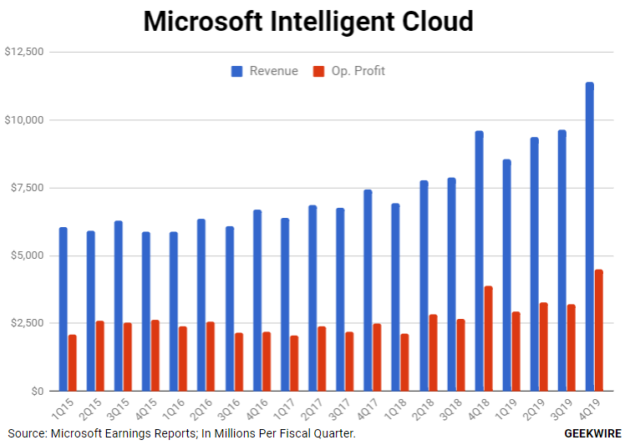 Overall, Microsoft beat expectations with quarterly revenue of $33.7 billion, an increase of 12 percent from a year ago, with profits of $10.6 billion. Microsoft CEO Satya Nadella said in a statement that the company’s efforts are resulting in “larger, multi-year commercial cloud agreements and growing momentum across every layer of our technology stack.”

Operating profit in the Intelligent Cloud division also reached a new peak of $4.5 billion, enough to put the division on top by that measure, as well.

Revenue in the Productivity and Business Processes division, which includes Office, Dynamics and LinkedIn, rose 14 percent to $11 billion, with operating profit of $4.3 billion. Microsoft’s More Personal Computing Division, which includes Windows and related products, posted revenue of $11.3 billion, up 4 percent, with operating profit of $3.6 billion.

Microsoft also reported a 39 percent increase in commercial cloud revenue, to $11 billion. This metric blends components from multiple divisions, incorporating products such as Azure and commercial versions of Office 365.

The company, which competes against Amazon, Google and other tech giants in the cloud, doesn’t break out Azure revenue in real numbers, but said the metric was up 64 percent in the fourth quarter, or 68 percent when adjusting for fluctuations in currency valuations.