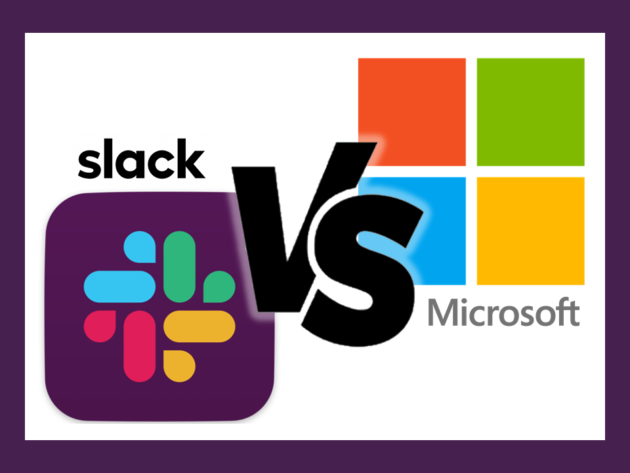 If you tuned into the news this week, you probably heard one name over and over again. Slack, the workplace communication and collaboration technology company, went public on the New York Stock Exchange and saw its shares soar 50 percent.

Yet Slack has just about 10 million daily active users from 600,000 organizations, modest numbers compared those boasted by larger enterprise technology companies. And it’s facing competition not just from Microsoft but also from Facebook, Google and many other established companies.

The big question now is how Slack can continue to grow.

Stewart Butterfield, Slack’s CEO and co-founder, is optimistic the company can tap into that potential, saying in an interview with Bloomberg TV’s Emily Chang earlier this year that Slack should end up as big as Microsoft, as a company, if it lives up to the potential he envisions.

“Enterprise software is an enormous category,” Butterfield said “Microsoft is the single biggest company in that category, but it’s still probably only 5 percent of all revenue. So there’s another 95 percent, and the reality is, customers make their choices. They will use one product from one company for one part of their business and another for another, and the degree to which they can interoperate or integrate with one another is really important for the amount of value you can create.”

That untapped potential, and the opportunity to be the hub for all those other products, are two reasons these companies are competing so aggressively. Slack estimates that the current market for workplace collaboration services is $28 billion.

Potential avenues of expansion include new geographies and industry verticals, or new categories of technology such as video communications.

Slack’s paid user base grew 83 percent to 3.5 million daily active users in 2018, according to a recent analysis from PitchBook, the financial data and software company based in Seattle. That number is bound to slow over time, but PitchBook projected that if Slack’s paid users grow by about 30 percent per year over the next decade it could push revenue to around $6 billion. That’s a 15X increase over the $400 million in revenue it brought in last year.

PitchBook thinks Slack can hold on to its position and continue to grow, despite intense competition from Microsoft.

“While there are many other communications and collaboration services startups in this space, we believe Microsoft is shaping up to be Slack’s main competitor, as the company doubles down on investments to improve the experience of its Teams platform,” wrote Paul Condra, PitchBook’s lead analyst for emerging tech. “While Microsoft has a large opportunity to convert its existing customer base, we believe Slack’s viral growth and wide range of integrations with other services should allow it to maintain market share and sustain its current growth trajectory.”

[PitchBook’s Paul Condra joins us this week on the GeekWire Podcast with more on Slack. We also check in with GeekWire reporter Nat Levy, who has been covering the story. Listen above or subscribe in your favorite podcast app.]

Competition between the two companies is well-documented. When Microsoft launched Teams back in 2017 Slack took the unusual step of placing a full-page ad in The New York Times both congratulating the tech giant and warning that “all this is harder than it looks.”

That feeling when you think "we should buy a full page in the Times and publish an open letter," and then you do. ? pic.twitter.com/BQiEawRA6d

Slack listed Microsoft as its “primary competitor” in an IPO document in April. Butterfield has acknowledged the challenge it faces going up against Microsoft. It’s the most valuable company in the U.S., and “if they start channeling all their resources against you, that’s a lot to compete with,” Butterfield told Business Insider in 2017.

The competition is a two-way street. Last year, Microsoft acknowledged the rivalry publicly, officially adding Slack to its list of competitors in its annual 10-K report. As reported by GeekWire on Friday, Slack is also on Microsoft’s internal list of “prohibited and discouraged” software for employees, due primarily to security issues but also competitive concerns.

Microsoft Teams hit its two-year anniversary in March, reporting at the time it had eclipsed 500,000 organizations using the app.

RELATED: No Slack for you! Microsoft puts rival app on internal list of ‘prohibited and discouraged’ software

Slack has clearly established a foothold among tech teams, and Smartsheet, the Bellevue, Wash.-based work collaboration software maker that went public last year, is a great example. The company mostly uses Google products, but the product, DevOps and other technical teams prefer Slack and have gotten their way. But that doesn’t mean the entire organization will use it.

“We’re not in a hurry to go expand Slack to the rest of the population, because we’d be paying for two tools that do very similar things,” said Gene Farrell, Smartsheet’s chief product officer. “And we see that same signal from other customers in the market.”

Farrell said Slack’s popularity among those highly valued tech teams creates an entry point into big organizations. The key to Slack’s continued success, Farrell says, is its ability to stand out from other offerings enough that broader swaths of employees want to use it.

Slack is in a great position in its market, however it is going up against more established competitors with billions to spend. Smartsheet knows about going up against behemoths, and it is a common scenario when an enterprise software startup makes a splash.

“If you’re successful, you’re likely going to have big tech trying to follow,” Farrell said. “And the jury’s out on whether they are able to do it effectively. In general, Microsoft has been challenged to build ground-up innovation.”

Microsoft Teams, Farrell said, is an exception to that reputation. He noted that Microsoft has flexed some serious creative muscle in building Teams. The effort Microsoft put into the tool shows just how serious it is taking Slack.

That work appears to be paying off. A survey of IT pros late last year found that usage of Teams passed Slack, and Microsoft’s upside in the market is huge.

Because of Microsoft’s incumbency, Farrell doesn’t see a world in which Slack takes out Teams. What he’ll be watching is how much market share Slack can take, and whether it can grow beyond its current niche of being a favorite of tech teams.

“I think Slack will continue to have a large business with the communities that they serve really well today,” Farrell said. “The real question is not whether one dominates the other, but more around how big can Slack grow, given Teams will be the IT favorite for most of the population.”