Microsoft considers Slack enough of a threat to its Office business to officially list the popular workplace communication and collaboration tool as a competitor for the first time in its annual 10-K report to the Securities and Exchange Commission.

RELATED: Don’t call it a chat app! How Slack is sharpening its focus to compete against Microsoft and others

The addition of Slack to the list is the latest sign of the changing nature of the Office franchise as it shifts to the cloud. The tech giant launched its Slack rival, Microsoft Teams, for Office 365 subscribers last year. It’s the latest expansion of the product line long known for the Word, PowerPoint and Excel productivity apps.

The recognition of Slack as an Office competitor is one of the more notable tidbits from Microsoft’s 10-K report, released Friday. The annual filing gives investors a comprehensive update the company’s business.

Microsoft removes @Adobe, @Oracle and @SAP from official list of @Office competition in its annual 10-K report, adds @SlackHQ. (Using Compare Docs feature in Word to see what was added and cut between 2017 10-K and 2018 10-K, which was just released. https://t.co/CGPDnvyYX9 pic.twitter.com/EKlBsTIyLS

We processed Microsoft’s 2017 and 2018 10-K filings through Microsoft Word’s “Compare Documents” feature to see what the company changed, removed and added this year.

Lists of rivals and risk factors are an obligatory part of these regulatory filings, pointing to competitive threats and providing legal cover by outlining the potential worst-case scenarios for investors. Much of the language is repeated from year-to-year. Because of that, the changes and additions stand out as glimpses into the company’s current mindset.

Microsoft recently unveiled a free Teams version that can be used without a subscription, escalating its Slack challenge. The company said in March that more than 200,000 organizations were using Microsoft Teams. Slack said in May that it is used by 500,000 organizations, with 8 million daily active users, including more than 3 million paid users. Microsoft, however, has the long-term advantage of being able to offer Teams to its base of more than 135 million Office 365 business users.

Another new sentence in this year’s 10-K report describes Teams as “core to our vision for the modern workplace as the digital hub that creates a single canvas for teamwork, conversations, meetings, and content.”

In addition to adding Slack, Microsoft removed Oracle, IBM and Adobe from the list of Office competitors. The removal of Adobe follows efforts by the companies to deepen their partnership in areas including the cloud and e-signatures, as well as further integration of Adobe PDF capabilities into Office 365.

Meanwhile, new revenue numbers in the 10-K show the continued growth of the Office business following Microsoft’s shift to a cloud subscription model. A section in the 10-K each year groups revenue by major product lines, providing a glimpse of the company’s performance through the lens of its well-known products and services. (This can often be difficult to decipher in the company’s quarterly earnings reports, which separates various products into different divisions.) 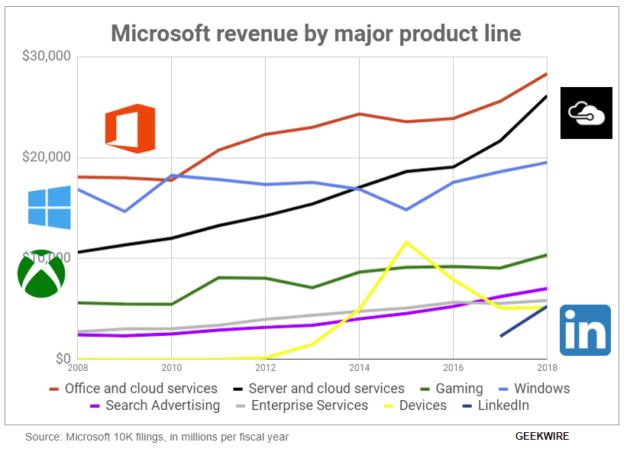 According to the 10-K, revenue for Office products and cloud services rose 10.7 percent to $28.3 billion in Microsoft’s fiscal 2018, which ended June 30. Office was followed closely by Server products and cloud services, with revenue of $26.1 billion, up more than 20 percent. Revenue in Microsoft’s Windows business rose about 5 percent to $19.5 billion.