Last Thursday, a multi-billion-dollar transportation package emerged from the Washington State Senate Transportation Committee as three bills: Senate Bills 5970, 5971, and 5972. In addition to the biggest element of the plan — the introduction of a “carbon pollution fee” — Senate Bill 5971 also includes a hefty increase in the annual registration fee for electric vehicles like the Tesla Model 3, Chevy Bolt EV, and Nissan Leaf.

Because owners of electric vehicles pay no gasoline taxes (which are used for road maintenance), they are currently charged an extra $150 fee per year on their annual registration. SB-5971 would more than double that fee to $350 per year. The tax is assessed at a flat rate on all-electric cars, from a fully tricked-out $125,000 Tesla Model X to a $6,000 used Nissan Leaf. 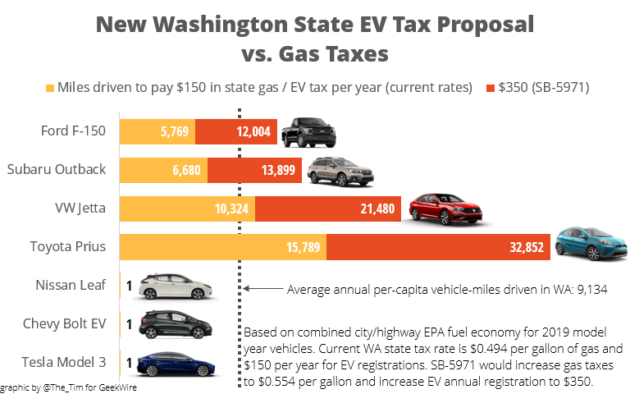 The current annual EV registration fee of $150 is roughly comparable to the amount of state gas tax (currently $0.494 per gallon) a driver of a 34.6 mpg gas-powered car would pay after driving about 10,500 miles per year. That’s the average fuel efficiency of light-duty passenger cars from the 10-year period between 2007 and 2016, according to data from the Bureau of Transportation Statistics.

The average vehicle in Washington is driven 9,134 miles in a year, according to 2017 data from the Federal Highway Administration Office of Highway Policy Information.

Under the new tax structure proposed by SB-5971 of $0.554 per gallon of gas and $350 per year for EVs, a 34.6 mpg gas-powered car would have to be driven 21,850 miles (2.4 times the state average) before the owner would pay Washington State as much in gas taxes as EV owners would be charged each year to register their vehicles.

We reached out to the bill’s primary sponsor, State Senator Steve Hobbs (District 44 – Mill Creek, Snohomish, Lake Stevens), chairman of the Senate Transportation Committee. Here’s how he explains his reasoning for more than doubling EV fees:

There’s a couple of reasons I decided to raise the EV fee to help pay for this plan. First, I tried to diversify the sources of revenue in this plan. I don’t think it’s fair to overly rely on one source of revenue. Second, the fact of the matter is that people who can afford electric vehicles are able to afford to pay a little more in fees. That’s a fact. I don’t want to disincentive people from buying electric vehicles, but I also don’t want to tax people who can’t afford it.

A centerpiece of this plan is the electrification of our highways. This additional fee would go toward that undertaking that we all agree is a crucial step toward lowering carbon emissions.

Nothing in this plan is written in stone, so I look forward to hearing from them and others about ways to make this plan work as intended for everyone.

The bill is currently scheduled for a public hearing in the Senate Committee on Transportation at 1:30 PM this coming Thursday, February 28 in Olympia (subject to change, check the website for the most up-to-date schedule).