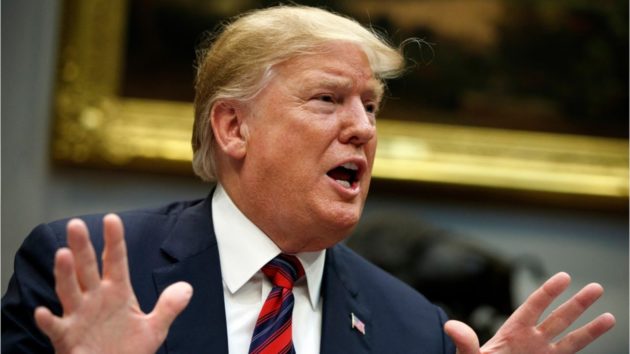 But President Trump also used some of the airtime to respond to questions about the growing power of tech companies as well 5G, Huawei and the proposed T-Mobile-Sprint deal.

Asked whether Facebook, Google and Amazon are too big and need broken up, President Trump responded by saying “they discriminate against me,” claiming that the “real collusion is between the Democrats and these companies.”

“They were so against me during my election run, and everybody said if you don’t have them, you can’t win,” he said. “Well, I won, and I will win again because we are doing well. We are not the fools anymore.”

CNBC returned to the question of regulation of big tech a few minutes later, asking President Trump to put his personal feelings aside to comment on whether the tech titans need regulation.

President Trump argued that “something is going on” with the growing power of tech companies, pointing out that the European Union is “suing them all of the time.” He added that the U.S. is going to look at the issue differently, not pointing to any specific plan to do so.

And, since the European Union is positioning for billions in fees and penalties with the tech companies, President Trump concluded that the U.S. should get in on that, too.

“They are actually attacking our companies, but we should be doing what they are doing,” Trump said. “They think there is a monopoly. But I am not sure that they think that, they just figure this is easy money; ‘We will sue Apple for $7 billion and we will make a settlement or we will win the case.’ So, I think it is a bad situation, but obviously there is something going on in terms of monopoly.”

Later in the interview, President Trump was asked about 5G, Huawei and the Sprint-T-Mobile merger, and he complimented the geniuses in Silicon Valley.

I made a priority: 5G. And before I got here, we were way behind. But now we are going to actually be leading very shortly. You know, we are leading in everything. We are, we are. If you look at China — China, as great, they are, and they are great — they don’t have near the capability of our geniuses in Silicon Valley that walk around in undershirts and they are worth $2 billion a piece, OK. They don’t have nearly the genius that these people have, and they practically admit it. They don’t want to exactly say that, so they go out and try to buy the companies. So now we have restrictions on that too, which we put in under my administration, very recently because they were buying all of our companies. They couldn’t do it. But we have the most brilliant people. We have the most brilliant.