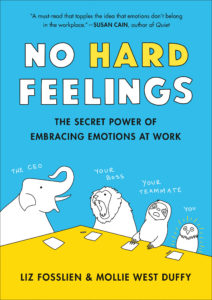 While some employers might prefer it if we behaved more like robots, the authors of the new book No Hard Feelings: The Secret Power of Embracing Emotions at Work argue just the opposite.

Emotions, correctly expressed, are incredibly helpful in the workplace, and can lead to effective change that makes workplaces better for everyone, they write. In fact, the ruthless corporate culture is as outdated as Gordon Gekko’s cell phone. Modern workplaces are more likely to engage in open dialogue, collaboration, and invest in amping up the empathy and emotional intelligence levels at work.

But sometimes playing nice at work isn’t as easy as all that. Grinding hours, workplace bullies, and nightmare bosses still exist.

Seattle native Mollie West Duffy and her co-author Liz Fosslien have laid out a game plan to help you develop your emotional intelligence at work. Their illustrated guide is a how-to on managing and expressing emotions at work, and also has advice on how to deal with difficult situations.

We interviewed the authors via email in advance of their Town Hall appearance this Saturday, June 22.

GeekWire: What inspired you to do the book?

When we entered the work world in our early 20s, we both felt that to be “professional” we had to ignore or suppress our emotions. We soon learned that not only is this strategy unsustainable, but it’s harmful, too.

That said, not every emotion you experience is necessarily a valuable signal. So we wrote a book that helped us answer the question: When should we listen to and express our emotions at work?

GW: Emotional intelligence (EI) is super hot right now, especially in tech land. Why do you think there is such an urgent calling for people to become aware and develop their EI right now?

We’re working more collaboratively than ever, which means we need to be better about understanding how our emotions affect those around us and to be more aware of others’ emotions. Companies are also becoming increasingly global, so we have to understand different work styles, preferences, and emotional expression tendencies across cultures. And finally, the line between work and life is so blurred, that we have to figure out how much of our full selves to bring to work, and how to draw digital boundaries.

GW: A lot of your EI advice is counter-intuitive to the grueling workplaces and hours we’ve been conditioned to expect and tolerate: 80-plus hours, always being on email, especially in tech. Are you seeing a large cultural shift away from those types of work expectations now and will it continue?

There are still many organizations where working long hours is the norm. What we are encouraging is for people to question whether this is necessary just because it is the norm. In the long run, if you’re working too much and not caring about yourself, you’ll burn out.

GW: If you do find yourself in a nightmare position (endless hours, unrealistic expectations, a boss who never shuts down), what is your best advice to cope? And when do you know you must exit?

Next, stop feeling bad about feeling bad. Our jobs can put a lot of pressure on us to radiate happiness and positivity. But the nature of work is to experience setbacks and to show up when you’re needed, even if you don’t feel like it. So stop blaming yourself for not feeling happy all the time. A better version of the familiar adage, “grin and bear it” may be: “Sometimes you have to bear it, but you shouldn’t force yourself to grin.”

Lastly, talking to a trusted colleague when you’re upset can be cathartic. When nurses who are frustrated with patients or doctors can share their frustrations with each other in private staff rooms, they are better able to handle stress.

And if you’ve tried all of this for a period of time (between several months and a year), it’s O.K. to quit!

GW: To the worker who is burnt out and belittled, but can’t afford to just quit his/her job, what is your advice?

Protect your self-esteem and try to refocus your attention on future possibilities rather than on what you hate about your current job. Cultivating your personal life can enable you to better weather your boss’ negative emotions — think of your friends, family, and hobbies as providing you with an emotional flak jacket.

Taking on a side project can also help you remind yourself that you’re still capable, even if your boss is bringing you down. And finally, try keeping a file of positive feedback you’ve received so you can refer to it when you need a mood boost.

A great way to prevent yourself from obsessing over a bad day or mean comment is to manage your attention. Think instead about the jobs you’re applying for, and what makes you excited about each one. Reframe your current situation as a challenging, finite experience that you can learn from.

GW: You talk a lot about the difficulties that women, people of color, and LGBTQ face in the workplace, but not a lot about ageism, especially in tech where it is rampant. When you get older, it also becomes harder to find another job. Yet older workers have a better EI, like Chip Conley at Airbnb, and a lot to offer. Why should people bring more experienced workers into the fold?

For exactly the reason you mentioned! Research shows our social skills peak in our 40s and 50s. And in fact, when Chip Conley, who founded Joie de Vivre Hospitality, joined Airbnb as a strategic advisor at age 52, he realized that though he didn’t understand all the tech terminology his younger colleagues used, he could still teach them a thing or two about [EI]. “Often I would leave a meeting and discreetly ask one of my fellow leaders, who might be two decades younger than I was, if they were open to some private feedback on how to read the emotions in the room, or the motivations of a particular engineer, a little more effectively,” he writes.

In our book, we recommend starting intergenerational mentoring programs that match younger employees with older employees. These programs can widen both parties’ mental horizons and reduce discrimination.

If you’re going to forge your own path, then do so without judgment. It is a beautiful thing to want something for yourself that originates from you.

GW: The hiring chapter was especially enlightening in the like-hires-like category. You found that keeping names off resumes and keeping it anonymous leads to greater equality. Are we moving to a more anonymous hiring system? Is anyone using it to great advantage, and not just using bots to skim resumes, as they’ve also been found to have bias?

Ideally companies should remove any information from resumes or cover letters that isn’t predictive of performance. As humans, we’re really bad at making accurate gut-based judgements on whether or not someone will succeed in a specific role.

Unfortunately, it doesn’t seem like we’re making enormous strides in moving toward an anonymous hiring system. In a survey, more than three-fourths of people involved in the interview process at elite law, banking, and consulting firms admitted to making hiring decisions based on purely their gut.

Blind evaluations, where a candidate’s race, gender, or background are concealed, force evaluators to look only at skill level—  and often lead to a more diverse set of hires. Orchestras famously reduced gender bias by asking musicians to audition behind a curtain. As a more recent example, The Daily Show also implemented a blind submission process — and ended up hiring more women and minorities.

GW: Sadly, women bosses often fall into one of two categories: Dragon ladies and the “nice” ones who climb their way to the top. Any advice for women under these bosses to cope?

A lack of opportunities for women in leadership positions leads to women cutting each other down in the workplace. A sense of scarcity leads women to feel like they have to compete with each other — and makes younger, more ambitious female employees seem threatening.

Research shows that women who are optimistic about their career paths are less likely to tear each other down. If you work for someone who is not a great boss, you can try to call it out, carefully. If you think your boss will be receptive to feedback, have a conversation about how their mood affects you. Calmly describe a specific behavior you’ve noticed and ask how you can improve the situation.

Mollie: Often when we think there are only two options, there are usually more. We just haven’t found them yet!

Liz: If you’re going to forge your own path, then do so without judgment. It is a beautiful thing to want something for yourself that originates from you.

Mollie West Duffy and Liz Fosslien, authors of No Hard Feelings: The Secret Power of Embracing Emotions at Work, will appear at Seattle Town Hall this Saturday, June 22, at 7:30 p.m.