Amazon is geeking out its Thursday Night Football streams this season by giving viewers access to advanced statistics during live games for the first time.

Next Gen Stats, which runs on Amazon Web Services, was previously only available during games to coaches and broadcasters, or afterward on the NFL’s website, social media, and other platforms.

But now fans will be able to use Amazon’s X-Ray feature to see real-time stats while watching the stream, including a quarterback’s average time to throw, a running back’s average yards after contact, and a wide receiver’s average yards of separation. More stat categories may roll out later this season.

“This is the first time they’re going to be able to actually access this kind of information live while they watch,” said Brandon Love, a senior product manager at Amazon.

Taking a look into @bakermayfield's performance tonight with #nextgenstats
Next Gen Stats, powered by @awscloud pic.twitter.com/QiuejNirtK

Amazon worked closely with the NFL to comb through different types of Next Gen Stats and identify the three most impactful pieces of information for viewers. The advanced data is made possible thanks to chips embedded in player jerseys and the ball itself.

Last year Amazon rolled out X-Ray for TNF, but did not include the Next Gen Stats. X-Ray began running on Amazon’s streaming movies seven years ago, taking advantage of the company’s acquisition of IMDb.

Also new this year: the X-Ray feature during games will be available on smartphones and tablets. Last season it was only accessible in the living room via Fire TV. To access the feature, fans can flip their smartphone or tablet and tap the “Stats by X-Ray” button. With the Fire TV remote control, clicking “up” will surface the Next Gen Stats.

Along with Next Gen Stats, the stream will show other basic stats; team and player info; and an e-commerce portal with team merchandise.

Embedding relevant info alongside or on top of a live stream is becoming more popular as games move online and technical capabilities increase. The Los Angeles Clippers, owned by former Microsoft CEO Steve Ballmer, last year unveiled Clippers CourtVision powered by AWS, which uses computer vision, artificial intelligence and augmented reality to analyze the action on the court and translate it into on-screen annotations and animations, displayed on screen as the game unfolds. Viewers can see the probability that a player will make a shot, for example, or watch as the play is diagrammed in real time on the basketball court.

This is not a totally new idea — an age-old example is the virtual yellow line indicating the first-down during a football broadcast. But technology has improved over the years and and there is a bevy of new data now available for these games. More fans are watching sports on their smartphones or laptops, making it easier to add new interactive or overlaid elements to a traditional broadcast. In 2017, NBA Commissioner Adam Silver said that live sports should look more like video games.

This week’s Packers vs. Eagles game is the first in a slate of 11 TNF matchups streamed by Amazon.

This is Amazon’s third consecutive year streaming Thursday Night Football games in partnership with the NFL. The Seattle company took the reigns after Twitter’s one-year shot at the effort in 2016 and its current two-year deal, worth a reported $130 million, expires after the 2019 season.

There’s something for every football fan — from deeper gameplay analytics at their fingertips, to differentiated commentary, to the ability to easily discover and watch on any device, anywhere in the world.

Fans will again be able to toggle between multiple audio options, including commentary from Hannah Storm and Andrea Kremer — who became the first all-female duo to call an entire NFL game last season — as well as a feed from the Fox TV broadcast with Joe Buck and Troy Aikman and two others in Spanish and U.K. English.

Storm and Kremer will be working out of a revamped studio in Connecticut with more video monitors and an in-studio stats researcher. They’ll also provide pregame analysis as part of a new 30-minute pregame show called NFL Next hosted by former player and Super Bowl champion Chris Long; NFL Network’s Kay Adams; and Next Gen Stats expert James Koh.

Amazon is also again streaming games via Twitch, the streaming platform it acquired for nearly $1 billion in 2014. The Twitch stream will be free — the Prime Video stream requires a $119/year Prime membership — and feature commentary from popular streamers on Twitch. 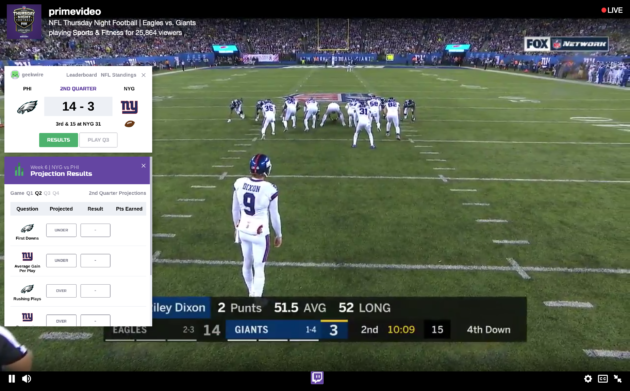 The streams, also powered by AWS, reached 24.4 million people last season in 200-plus countries across Prime Video and Twitch, up 33 percent from 2017.

The average number of people who watched during any 30-second portion of the streams on Prime Video was more than 500,000 — up 61 percent from 2017. Prime members watched more than 1 billion minutes of live game content on Prime Video and Twitch last season.

“We’re revolutionizing the way football fans stream Thursday Night Football and allowing Prime members to personalize how they watch and hear the game,” Donoghue said in a statement. “There’s something for every football fan — from deeper gameplay analytics at their fingertips, to differentiated commentary, to the ability to easily discover and watch on any device, anywhere in the world. We think both longtime sports fans and those new to the game will love watching and engaging with TNF on Prime Video and Twitch.”

The NFL streaming deal is part of Amazon’s video arm that includes the company’s Prime video library; its Amazon Studios production unit; and other sports-related content.

Here’s the 2019 schedule for Amazon’s Thursday Night Football games, which kick off at 5:20 p.m. PT: