Amazon spent $1.65 billion on acquisitions in 2018, according to a new regulatory filing from the company. That makes it the second most acquisitive year in the company’s history by dollar volume, behind only 2017, when the tech giant spent more than $13 billion to buy Whole Foods Market.

Two major acquisitions headlined Amazon’s 2018: Smart doorbell maker Ring and online pharmacy company PillPack, reflecting the company’s larger ambitions in smart-home technology and in health care. Amazon didn’t disclose the prices of the deals at the time, but each was reportedly valued at or above $1 billion.

In its annual 10-K filing with the U.S. Securities and Exchange Commission, released Thursday afternoon following the company’s year-end earnings report, Amazon reported cash acquisition prices of $839 million for Ring and $753 million for PillPack as part of its recap of acquisition activity for the year. 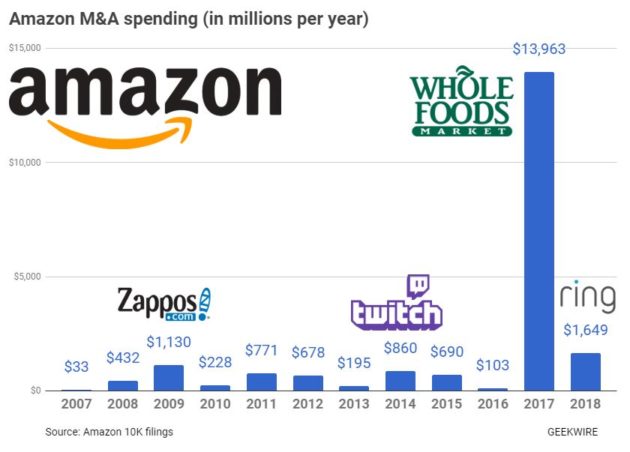 Both prices are “net of cash acquired,” meaning the cash on the Ring and PillPack balance sheets was subtracted as part of that accounting. That may account for the discrepancy between Amazon’s figures and numbers in media reports.

In addition to those two buys, Amazon said it spent $57 million on other acquisitions in 2018.

Amazon has never spent more on acquisitions than it has in the last two years, and it is snapping up companies at a rate not seen since the dot-com era.

Big picture: The spending spree by Amazon comes amid a larger wave of technology mergers-and-acquisitions, resulting from U.S. tax reform and other favorable conditions for M&A activity.

A year-end report from PitchBook and the National Venture Capital Association called 2018 “an exceptionally strong year for VC-backed exits” in the United States, including IPOs and acquisitions, with deals valued at more $120 billion, up 33 percent, even though the number of deals remained relatively flat compared to the prior year.

Amazon vs. Microsoft: The Seattle region’s other homegrown tech giant, Microsoft, also had a big year for acquisitions, spending $7.5 billion on GitHub in 2018, a year after buying LinkedIn for $26.2 billion.

Microsoft and Amazon are currently the two most valuable companies in the world, as calculated by market capitalization, but both the Ring and PillPack deals were cash acquisitions, not relying on the value of Amazon stock to fund the deal. Microsoft’s LinkedIn acquisition was a cash deal, while GitHub was an all-stock transaction.

Amazon acquisition history: Amazon has only hit $1 billion in acquisition spending in two other years: 2017, headlined by the blockbuster purchase of Whole Foods; and 2009, when it acquired online clothing and shoe retailer Zappos.

In 1999, Amazon made nine acquisitions, according to GeekWire research, but only six were explicitly named in its annual report that year, with a combined purchase price of $780 million. Amazon also bought stakes in high profile dot-com companies like pets.com and drugstore.com.

(Fun fact: One of Amazon’s biggest buys that year was a $250 million acquisition of a company called Alexa Internet, which provided information about site viewership and suggested related sites. Amazon has since repurposed the Alexa name for its voice-based virtual assistant.)

What’s next: Amazon has already made two acquisitions so far in 2019, both through its Amazon Web Services cloud division: TSO Logic, a Vancouver B.C. startup working on cloud spending analysis; and CloudEndure, a disaster-recovery services company based in Israel. Financial terms of those deals were not disclosed.

Analysts are making some big predictions for Amazon acquisitions in 2019. Susquehanna analyst Jack Micenko suggested Amazon should acquire Redfin, the Seattle-based online real estate brokerage, to get access to its “troves of data” in real estate, an area in which Amazon has been showing more interest in recent years.

Amazon’s integration strategy: Amazon has treated the Ring deal similar to Whole Foods and other major acquisitions, pursuing product and feature integrations where appropriate but maintaining the Ring brand and largely allowing the company to continue operating as it has in the past. Last month, at CES in Las Vegas, Amazon unveiled several new Ring products, just a few months after debuting several other devices at an event at Amazon HQ.

Speaking at the 2018 GeekWire Summit, Ring founder chief inventor Jamie Siminoff pointed to the acquisitions of companies including Audible, IMDb, Twitch, and Zappos as examples of that arms-length approach. “I wanted to continue to build the business and Amazon is one of the greatest acquirers in the world of allowing companies to still build and be impactful post-acquisition,” he said.