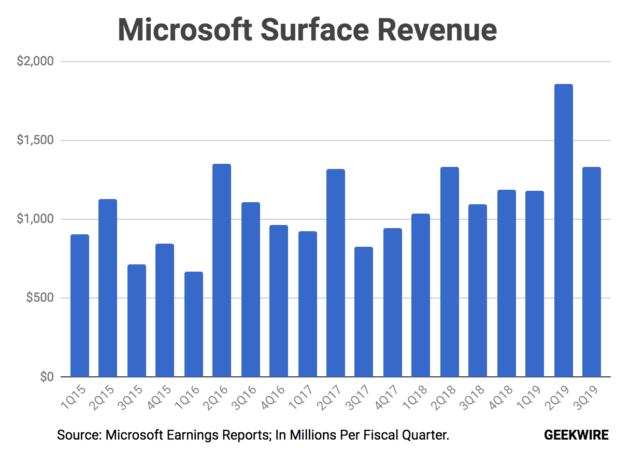 Microsoft’s Surface division is on a roll.

After posting a staggering 39 percent revenue growth over the holiday season and inching closer to hitting $2 billion in quarterly revenue for the first time, the hardware group kept the momentum going in the most recent quarter. The Surface division reported revenue of $1.3 billion in the third quarter of the Microsoft fiscal year, and while that is down from last quarter’s blistering pace, it is up 21 percent over a year ago.

Though Microsoft didn’t release any new devices in the quarter, it unveiled refreshed versions of the most popular Surface tablets and computers as well as the surprising new Surface Headphones at an event in October. Reveal events in the fall, ahead of the holiday shopping season, have become a trend among most big companies, and it appears to have paid off for Microsoft this time around.

So far this quarter, Microsoft has already held one hardware event. Last week, the company debuted several versions of the follow-up to its Windows 10-powered interactive conference computer: Surface Hub 2. The device begins shipping in June at a starting cost of $9,000.