PAX, the gaming convention created by Seattle-based Mike Krahulik and Jerry Holkins as an offshoot of their gaming webcomic Penny Arcade, has expanded from a single show in Bellevue, Wash. more than 15 years ago to four giant events spread across the entire U.S., plus one in Australia.

It’s been a wild ride since that inaugural convention, both for PAX and Penny Arcade. At last month’s annual PAX West event in Seattle, GeekWire sat down with Holkins and Penny Arcade producer Elyssa Grant to talk about PAX, the official Acquisitions Incorporated D&D Dungeon Manual, “actual play” podcasting, and indie developers.

In June, Penny Arcade launched its first official D&D manual in partnership with Renton, Wash.-based Wizards of the Coast. The book brings some structure to Acquisitions Incorporated, a show that began as a D&D podcast over ten years ago hosted by Wizards of the Coast producer Chris Perkins, along with Holkins and Krahulik.

It has since grown in popularity and expanded to live performances at most PAX events during which Holkins, Krahulik, and the other Acquisitions Inc. players don elaborate character costumes and play their D&D campaigns in front of huge audiences.

Since the launch of the book, Penny Arcade has taken its show on the road, including a first-ever appearance at the Indianapolis tabletop gaming convention Gen Con. “Penny Arcade has never had a show that I was not at,” said Holkins, who was not at Gen Con. “It’s an index of how things have changed for Penny Arcade that we can execute on something like that, and I’m not necessarily the point of it — Acquisitions Incorporated is pretty strong, it’s sort of its own thing.”

With over a decade of podcasting their D&D campaigns for the entertainment of others, it’s entirely possible that Acquisitions Incorporated was the first ever podcast in what is now known as the “actual play” podcast genre. During actual play podcasts, players record their role-playing game sessions and release it as a show for listeners. There are hundreds or even thousands of actual play podcasts available now, across every genre and RPG play system you can imagine.

Is Acquisitions Incorporated credited as the first to kick off the entire genre?

“You can’t say that, I don’t think,” said Holkins, only after criticizing the term “actual play” as “weird, like ‘blog’ or ‘vlog,'” as well as being unclear and “not useful language.”

“I know that if it was happening [in 2009], or if somebody else was doing it, we didn’t know about it,” continued Holkins. “Podcasting is an industry now — a booming, profitable industry.” 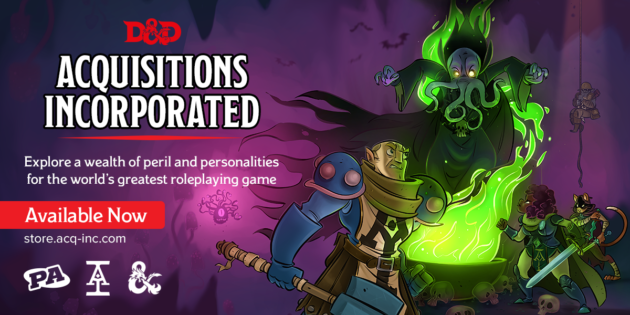 Grant noted how “when we originally pitched the idea to Wizards of the Coast, their response was, ‘why would anyone want to sit and watch people play this game?'”

“It was hard to fathom,” she added. “They thought, ‘this is a game that you sit down and do, not watch’ — boy, has that shifted.”

Holkins compared podcasting a D&D campaign like Acquisitions Incorporated to “attract mode” on old arcade games because it draws in listeners, piques their curiosity, and “it’s only a matter of time before you put a quarter into that machine,” he noted.

Our conversation also touched on the topic of PAX and complaints about how the show now “mutes the voice of independent developers,” as noted last month by GeekWire contributor Nicole Tanner.

“That does not comport with reality,” Holkins said.

“I have a tremendous heart for independent developers. The vast majority of the games I play are independent,” Holkins said.

“If it were true [that PAX mutes indie developers], I would pull the biggest lever I could to fix it,” he added. “That’s why I come to this show, and that’s where I spend my time, and I’ve seen a lot of awesome [indie] stuff this year.”