The convention spreads out across the entire Indiana Convention Center, Lucas Oil Stadium (home of the NFL’s Indianapolis Colts), and the ballroom space of several large nearby hotels. More than 60,000 attendees crowd the venues, seeking out classic games, tabletop role-playing, brand new releases, upcoming titles, and prototypes of games still being developed.

The scene at the con is crowded, but super friendly. Even in the jam-packed hallways waiting for the main expo hall to open, the crowd is upbeat and joins together in a cheerful chant of “here we come!” Although people come from all over the country (and world) to attend Gen Con, the famous Midwest friendliness really comes through as you interact with your fellow attendees.

Strangers will strike up a conversation with you in the elevators! I sat down to play a demo of one two-player game and the company rep running the demo had no problem at all getting a random passer-by to happily join me. As I played through another game demo, a stranger came up and started asking me questions about it! These are all experiences I don’t think I’ve ever had at the similar Seattle-based gaming convention PAX West, where the Seattle freeze seems to extend into the convention center.

Speaking of PAX, the expo hall at Gen Con is focused on low-tech physical games made mostly of cardboard, wood, and plastic, and thus has a very different feel from the equivalent space at PAX (which includes tabletop gaming but is dominated by video games). The Gen Con expo hall is bright and relatively quiet. Rather than a cacophony of game demos blasting at your ears from every direction, there’s just the quiet murmur of the crowd. It also lacks the giant displays, massive props, and enormous video screens that make up the bulk of the vendor booths in the PAX expo hall.

There are a few traces of video gaming at Gen Con, including a classic arcade room and an appearance from the controversial arcade gaming legend Billy Mitchell, of “King of Kong” fame, the classic documentary that pitted him against Seattle-area teacher Steve Wiebe. Mitchell is here to make a live attempt at a “perfect game” on Pac-Man.

Many Seattle-based game companies also made the trip out to Indianapolis to show off their latest, including Funko Games, Ravensburger, Lone Shark Games, and many small indie game publishers and developers like Junk Spirit Games and Mind the Gap Studios (run by former Geek of the Week Peter Newland). Even Penny Arcade (creators of PAX) have a small booth focused on their recent Acquisitions Inc. D&D manual.

Here’s a look inside the show this weekend, for everyone who isn’t here in Indianapolis: 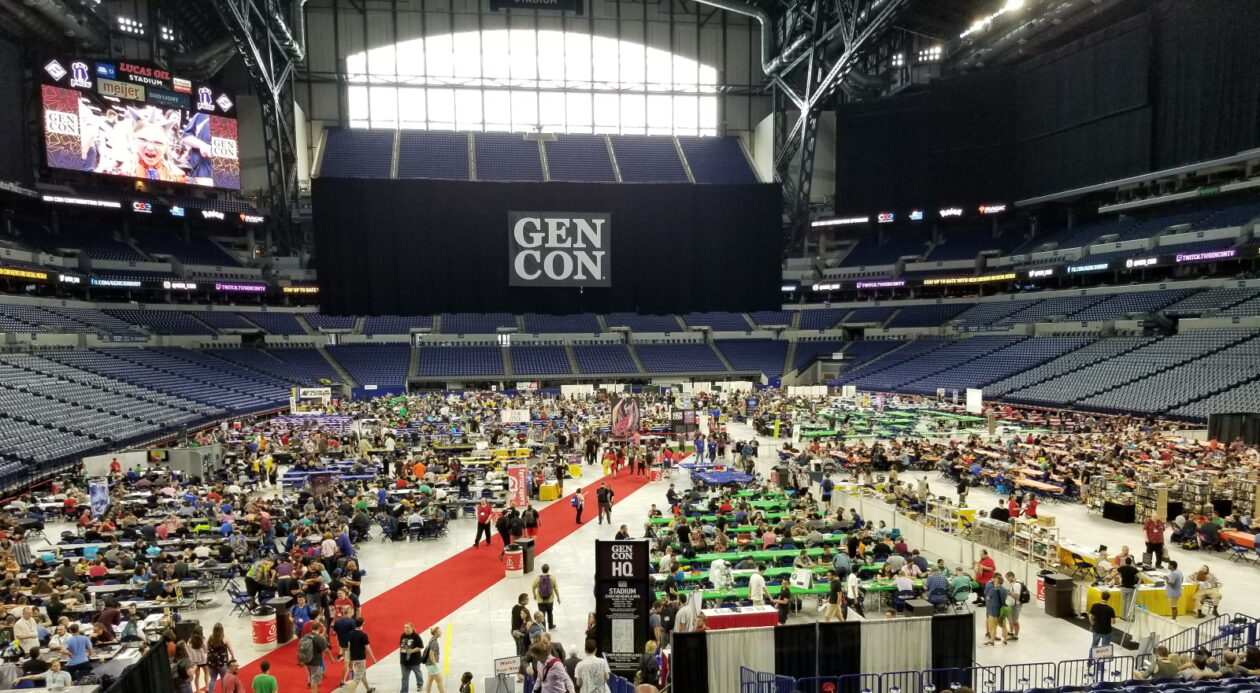 Lucas Oil Stadium, home of the Indianapolis Colts, has been taken over by Gen Con events 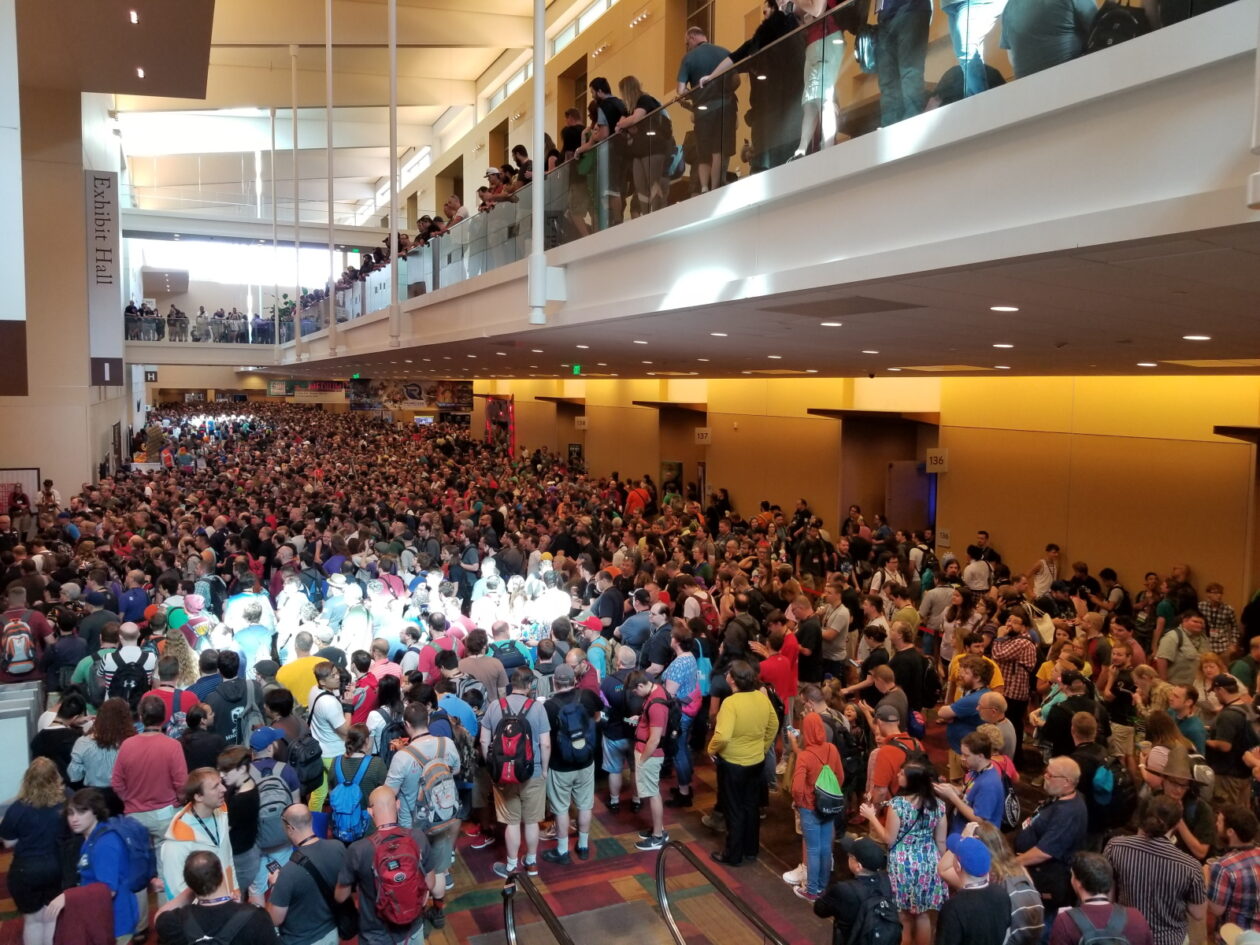 A massive crowd waits for the doors to the main Expo Hall to open at 10AM on Saturday at Gen Con. 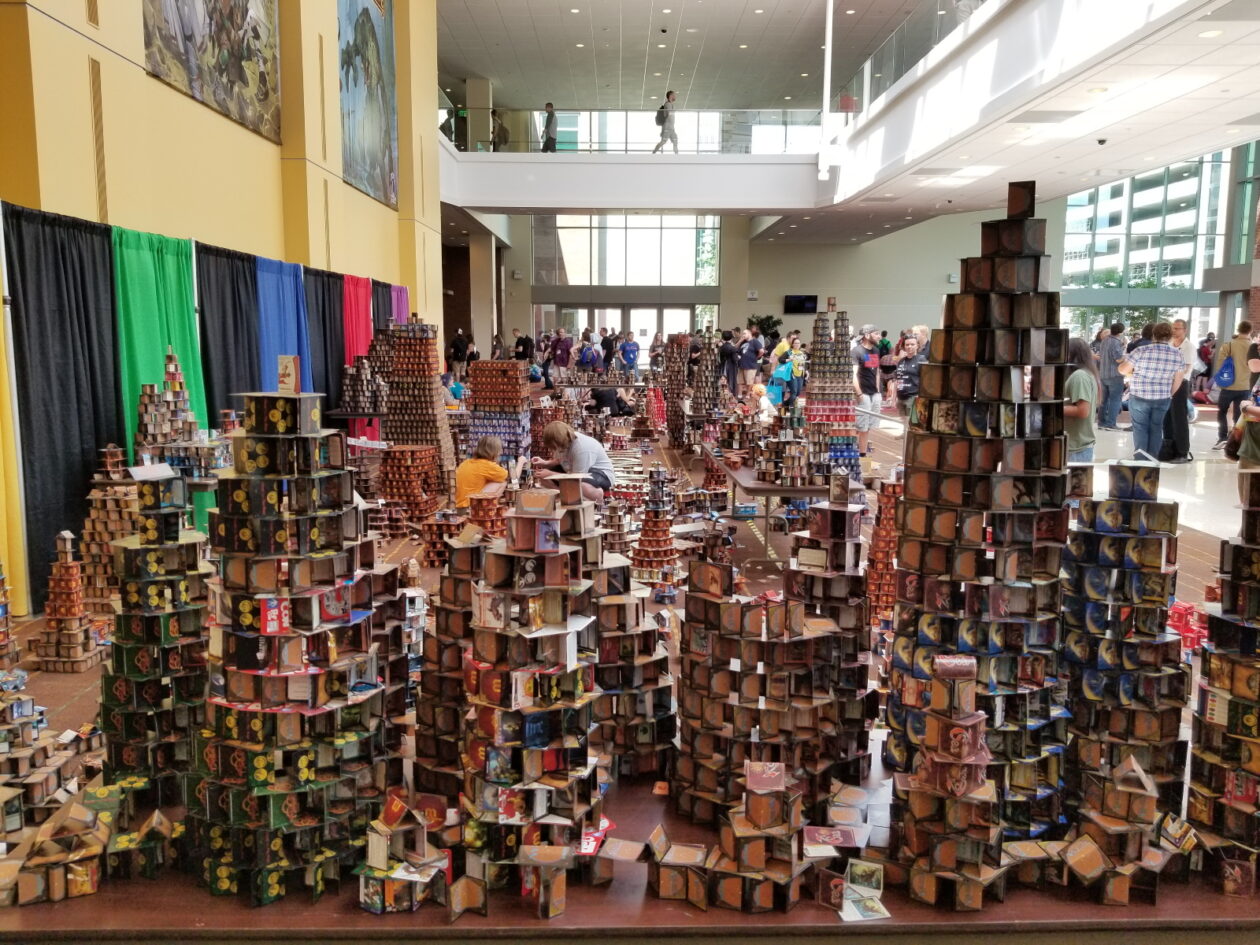 These huge card towers constructed at Gen Con will be destroyed by throwing coins for charity on Sunday. 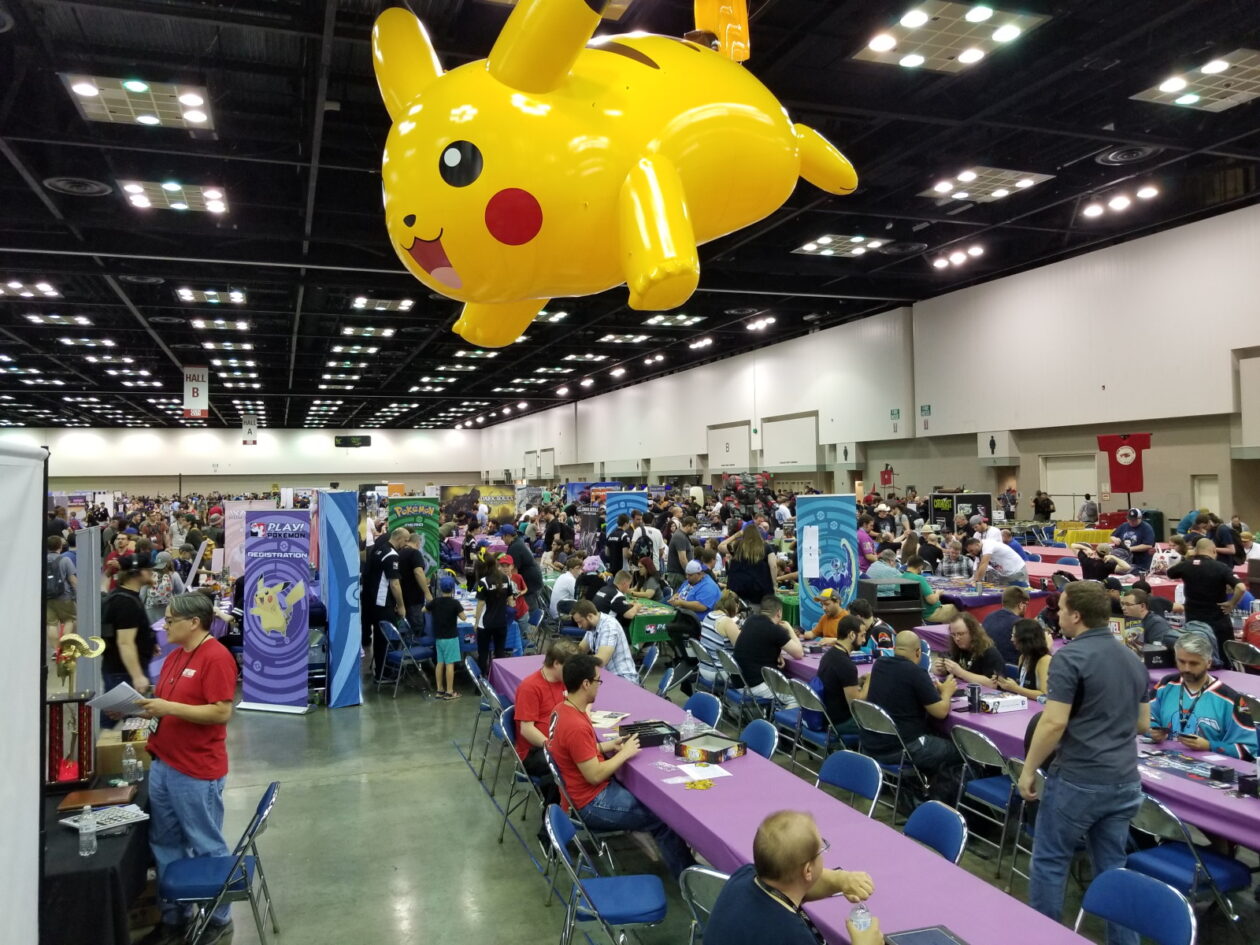 An enormous Pikachu hangs over the game demo tables at Gen Con.

There are at least six different makers of custom gaming tables at Gen Con, including four in this hallway alone. 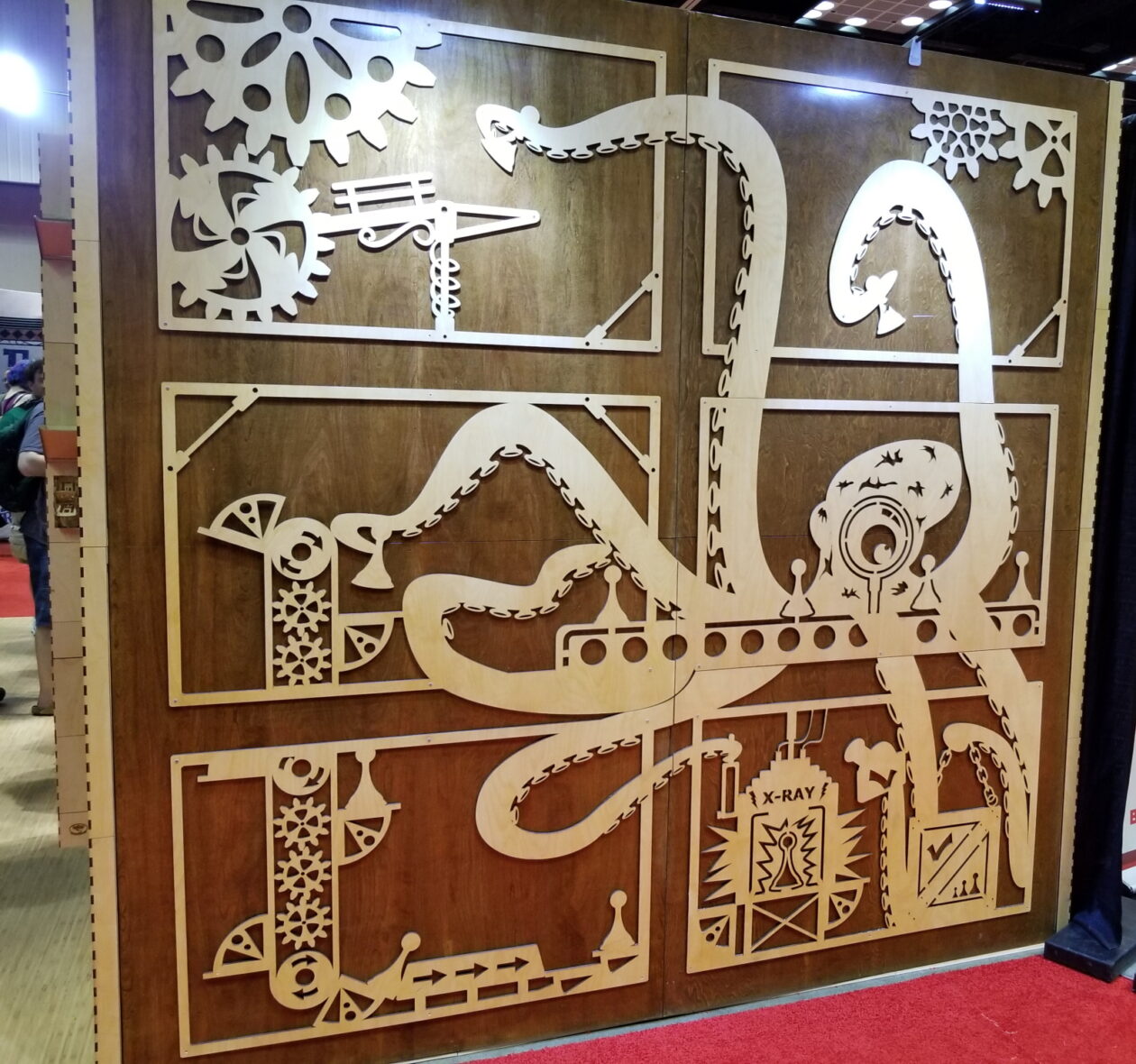 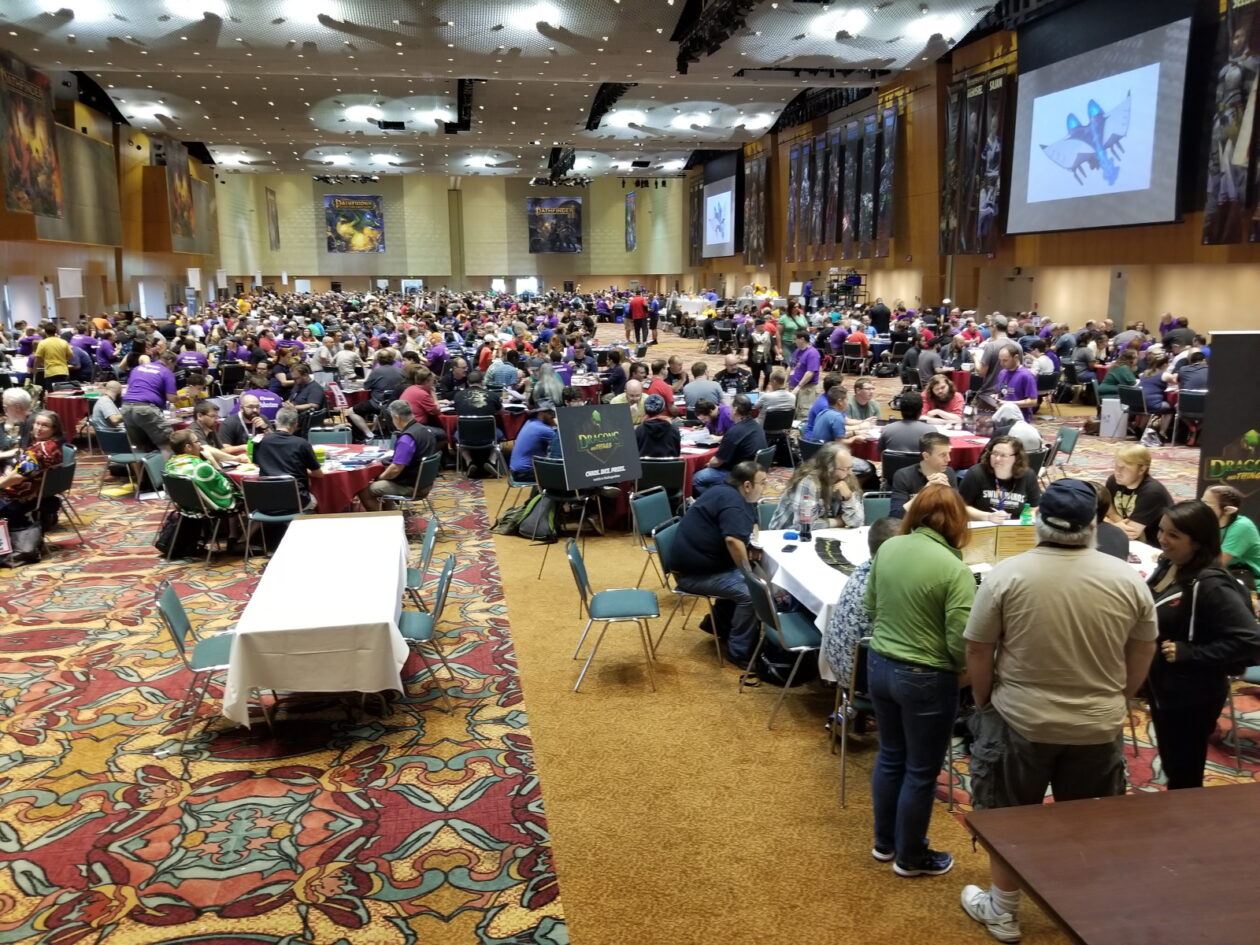 One of many huge ballrooms at Gen Con dedicated entirely to playing a single game, in this case a role-playing game called Pathfinder. 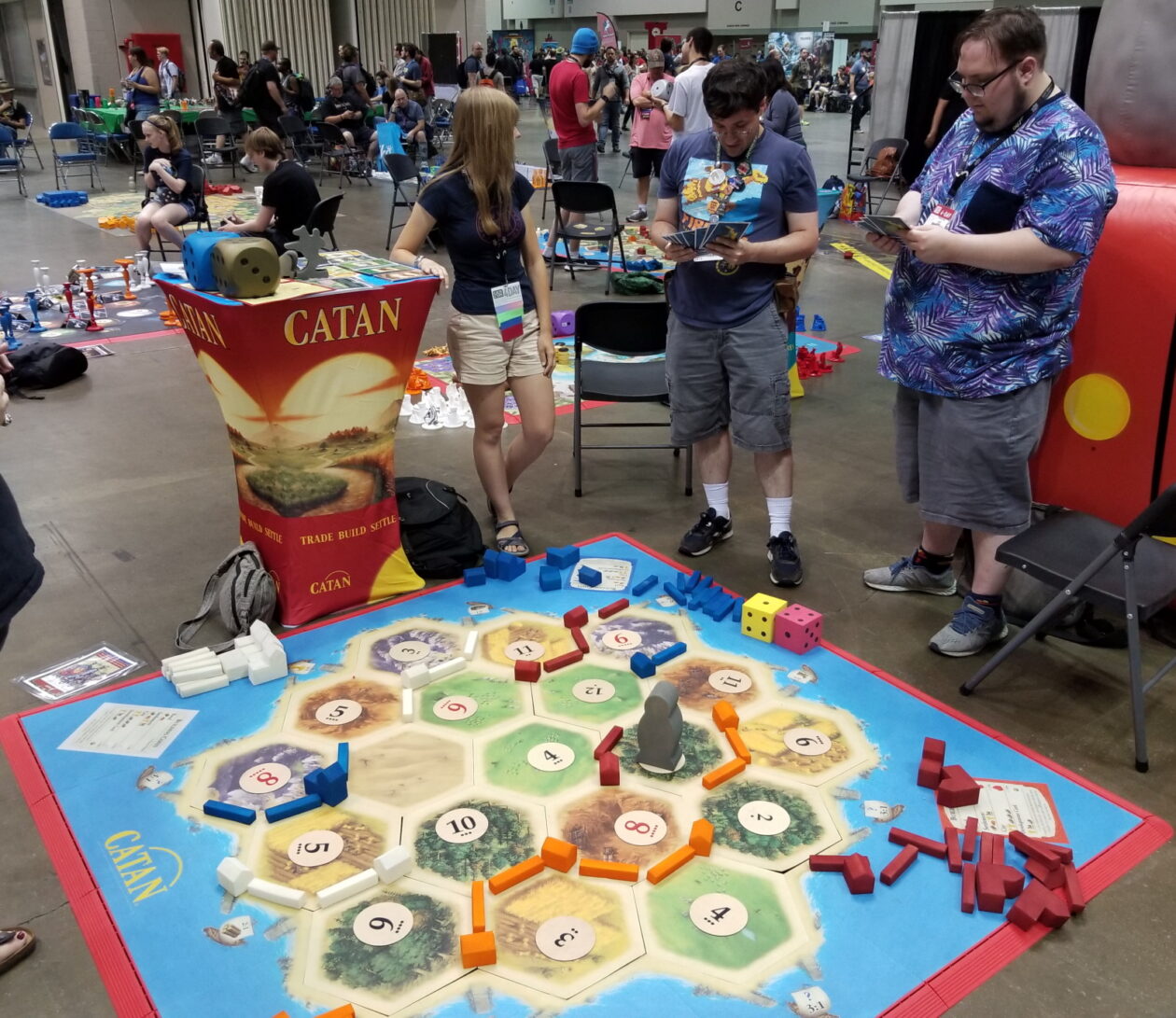 A giant game of Catan takes place at Gen Con 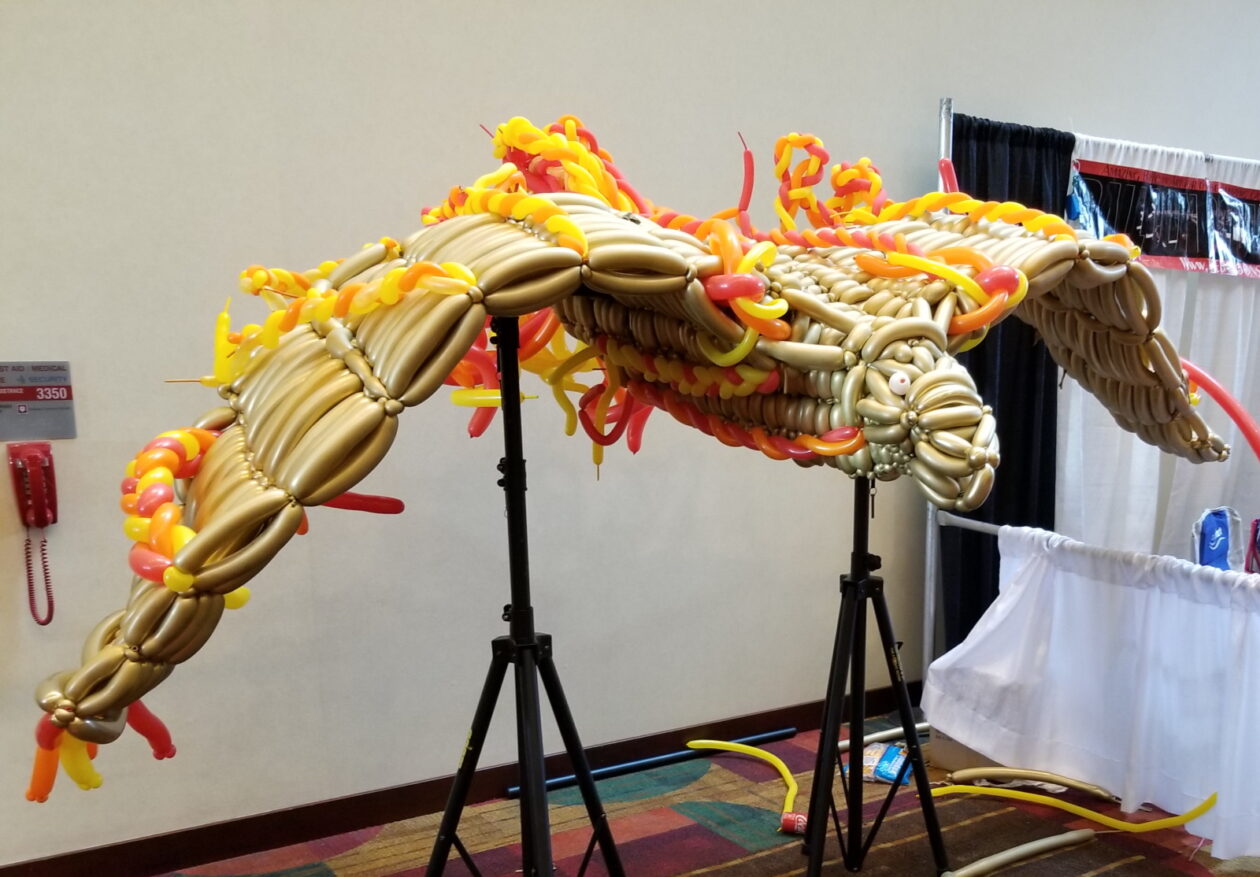 A hallway lined with arcade games at Gen Con.

A crowded hallway at Gen Con. Also a blue t-rex. 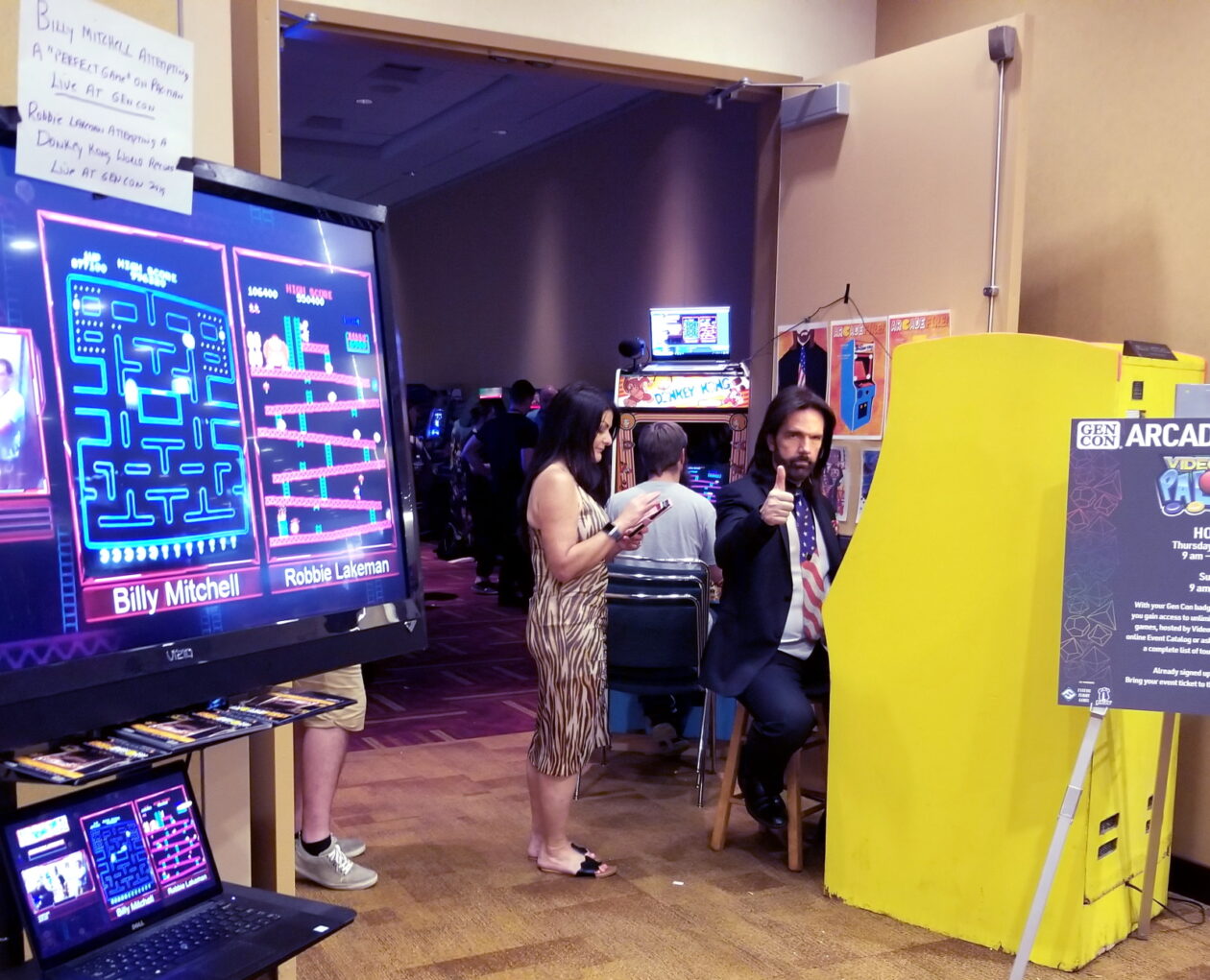 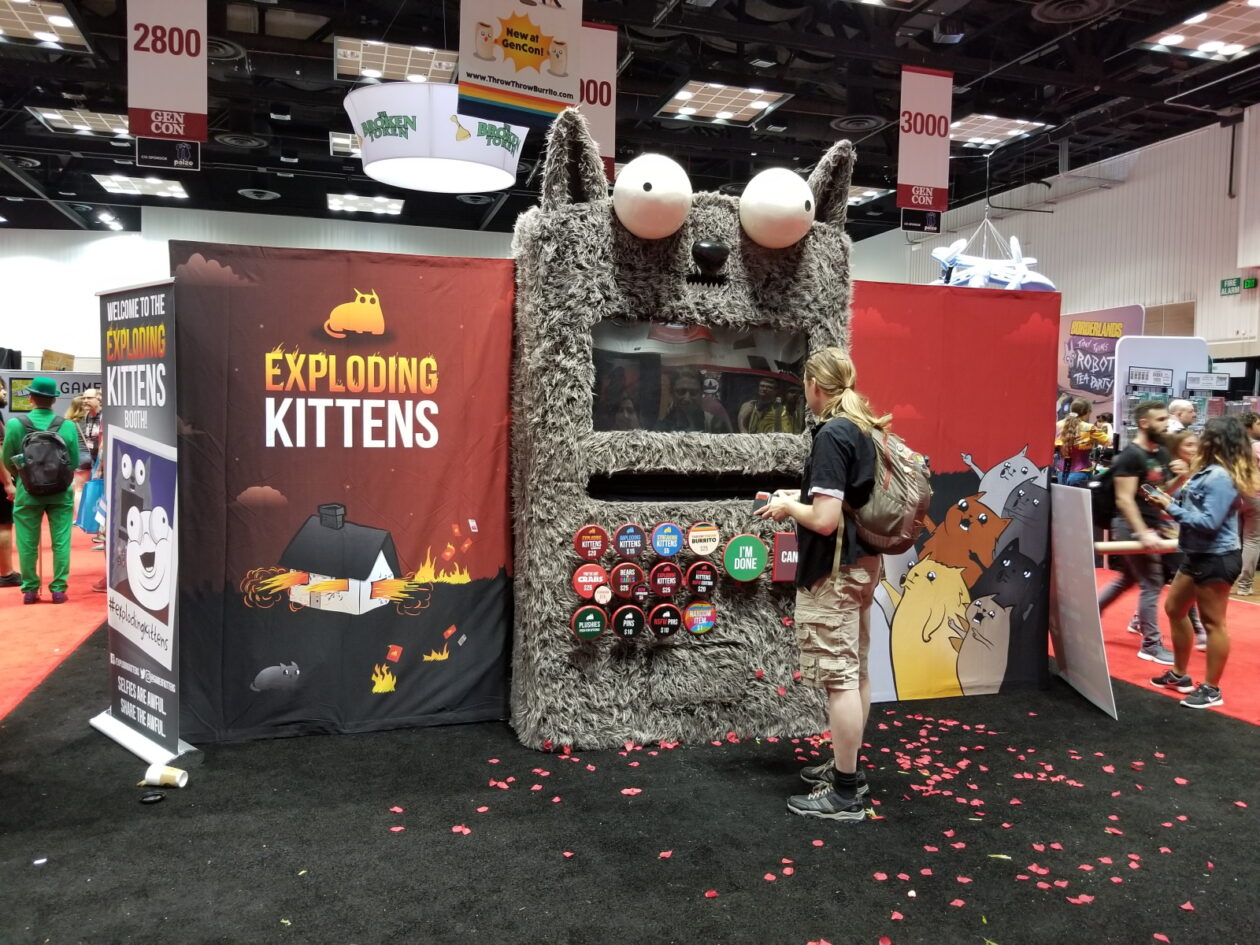 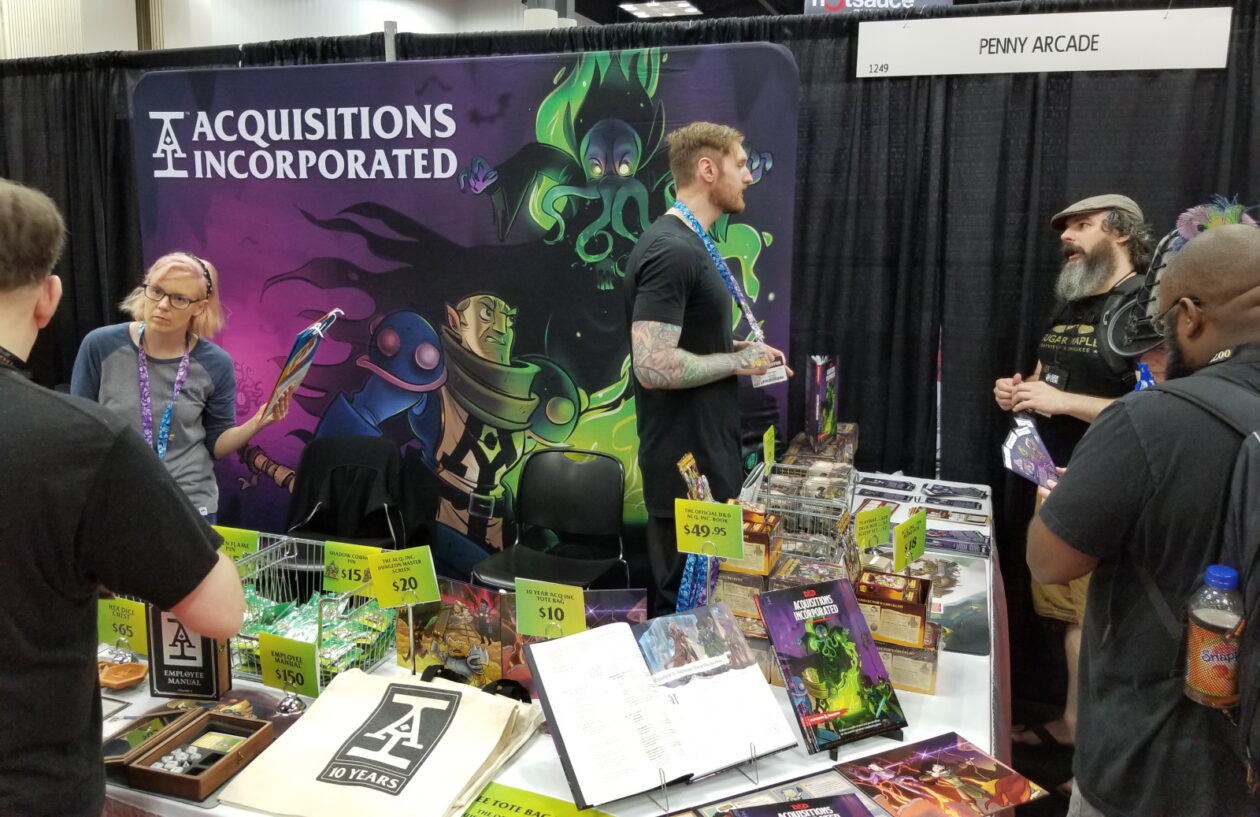 Seattle’s “Penny Arcade,” creators of the gaming convention PAX, have a small presence at Gen Con 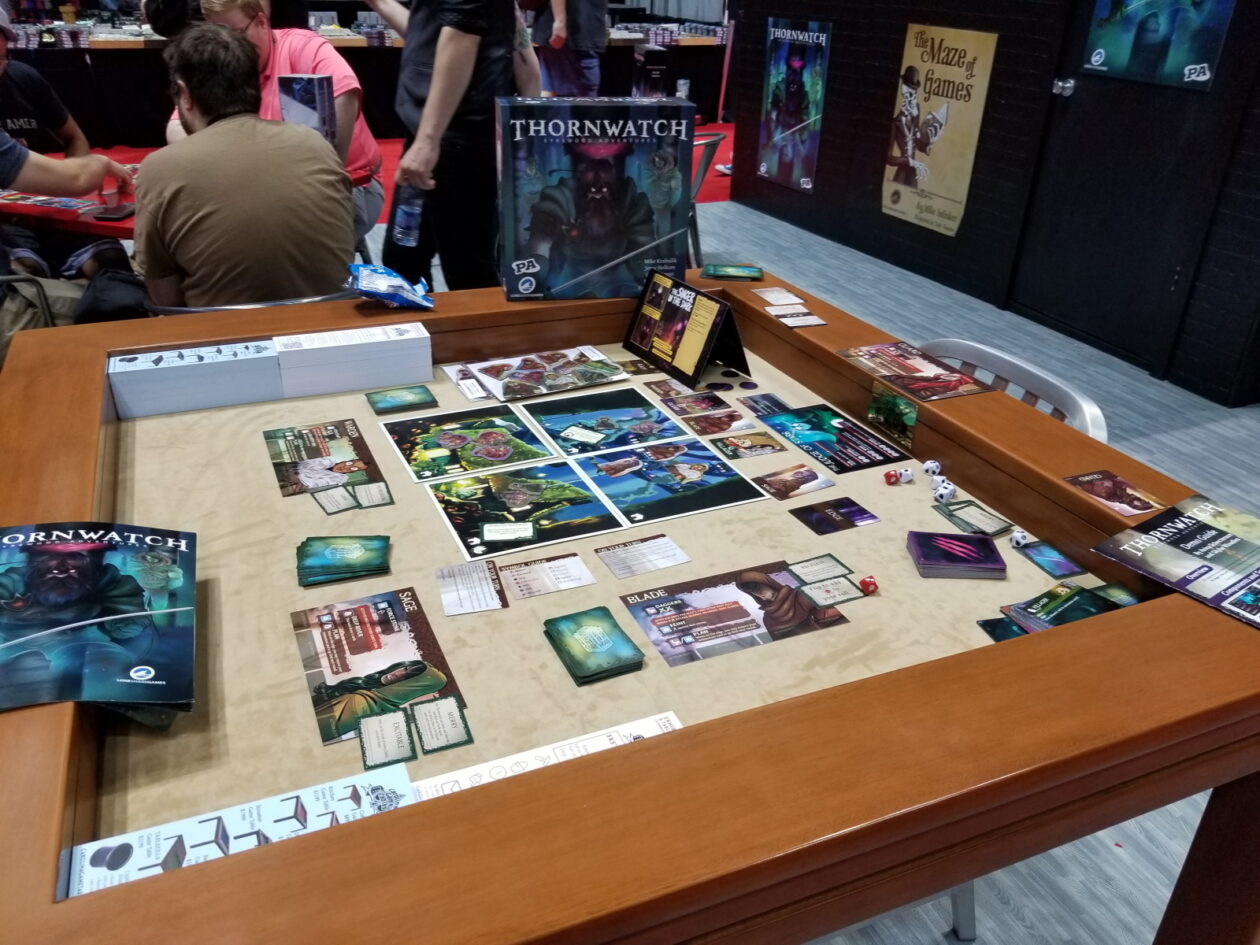