Five teams from around the world have risen to new heights in the GoFly Prize competition, a $2 million-plus contest backed by Boeing to encourage the development of personal flying machines.

The Phase II contest winners, unveiled today in connection with the SAE AeroTech Americas conference in Charleston, S.C., will receive $50,000 prizes and the chance to compete for the $1 million grand prize in a future fly-off.

“Now we can unequivocally say we will be able to make people fly within the next one to two years,” Gwen Lighter, GoFly’s CEO and founder, told GeekWire in advance of the announcement.

Judges chose the five Phase II winners from an initial field of more than 800 teams from 101 countries.

The competition’s requirements call for the development of flying machines that can make vertical or near-vertical takeoffs and transport a single person up to 20 miles.

Last year, 10 Phase I winners were selected on the basis of their designs for aerial vehicles, which ran the gamut from mini-helicopters to flying bikes and “Star Wars”-style landspeeders. For Phase II, competitors had to build and test prototypes, either scaled-down or actual size, and show that they could be operated safely and quietly.

The five winning teams are:

Aeroxo LV, based in Russia and Latvia. Aeroxo’s ERA Aviabike is a tiltrotor aerial vehicle that performs like a flying bicycle. It combines the vertical-flight capabilities of a helicopter with the range and speed of a fixed-wing aircraft.

DragonAir Aviation, based in Florida. DragonAir’s Airboard 2.0 is an all-electric, self-stabilizing hovercraft that carries a single passenger in a standing position.

Silverwing Personal Flight, based in the Netherlands. Silverwing’s S1 is a flying motorcycle. The device’s main features are two electric ducted fans, a passenger shell for safety, and a landing gear and battery pack integrated into the wing.

Texas A&M Harmony, based in Texas. The Harmony team’s Aria aircraft is a compact rotorcraft designed to minimize noise and maximize efficiency, safety and reliability. The team includes researchers from Texas A&M and other institutions.

Trek Aerospace, based in California. Trek Aerospace’s FlyKart 2 is an electric, single-seat, multi-rotor, ducted-fan, vertical-takeoff-and-landing aircraft that’s designed to be inexpensive to build, own and operate. 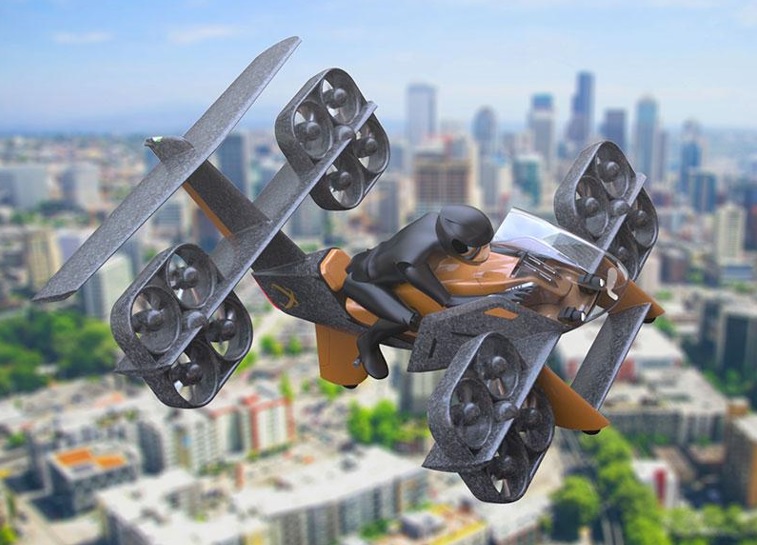 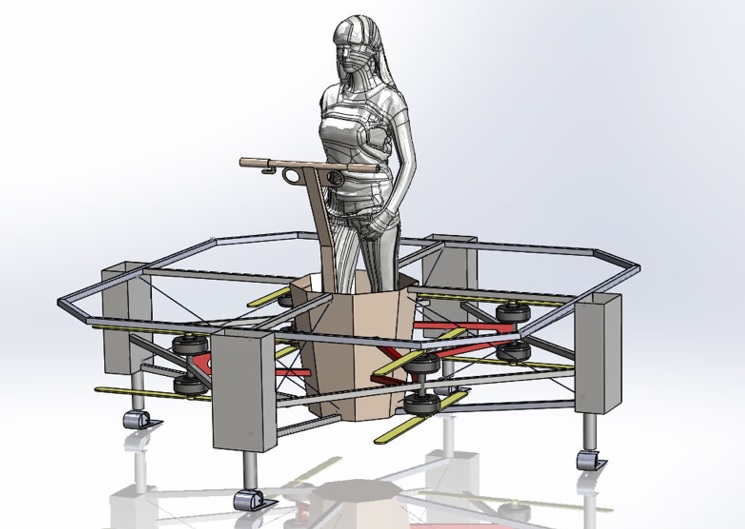 DragonAir Aviation’s Airboard 2.0 is designed to be flown standing up. (DragonAir via GoFly) 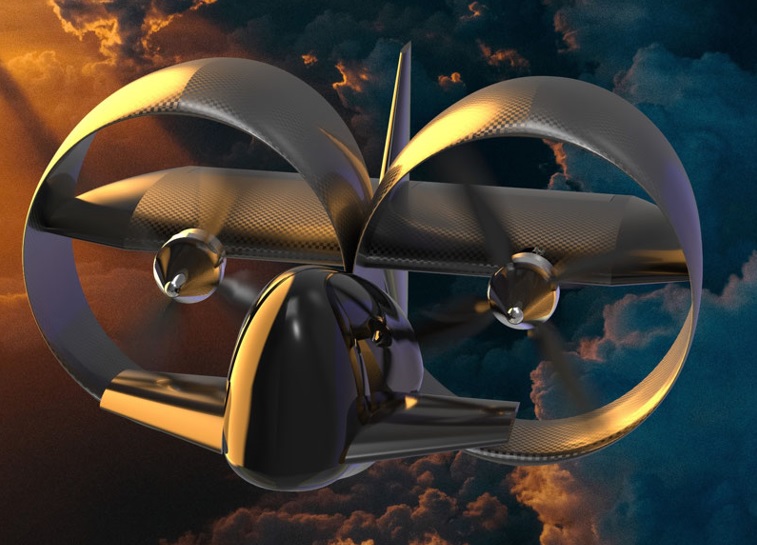 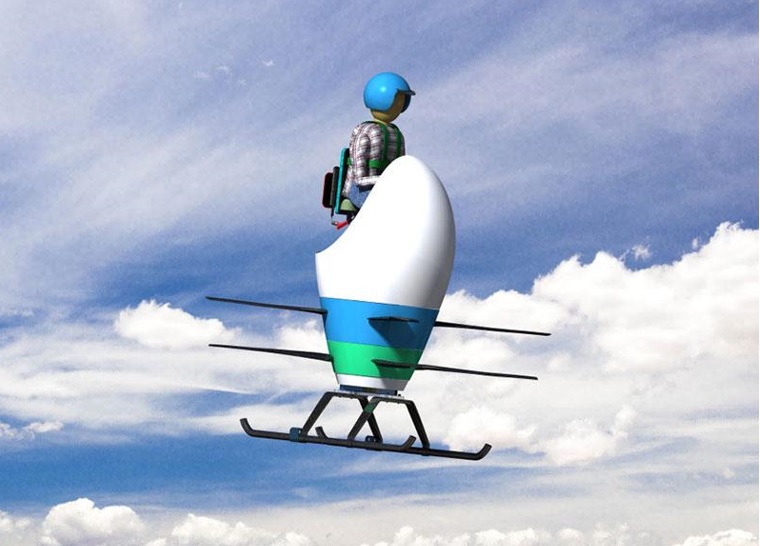 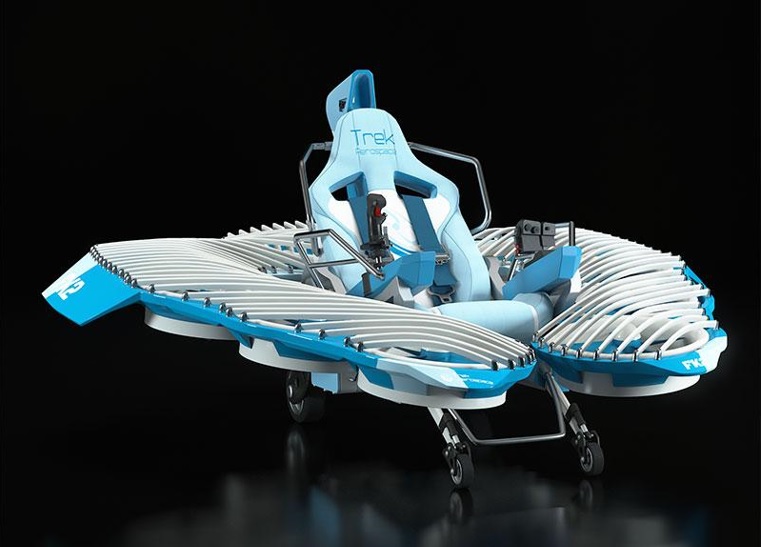 “Innovation can truly come from anyone, anywhere,” Lighter said.

Boeing’s chief technology officer, Greg Hyslop, said “we’re inspired and excited to see the strong progress that GoFly competitors have made on their bold, creative designs.”

“Their work confirms a principle that’s at the core of both Boeing and GoFly: Aerospace innovation changes the world,” Hyslop said in a news release.

The next phase of the competition calls for finalists to turn their prototypes into full-scale flying machines, for a fly-off at a site yet to be selected in the western United States in early 2020.

That time frame is a bit later than the original plan to have the fly-off late this year. “Our primary focus has been on safety and weather and wind,” Lighter explained. “The sites that we are most interested in using are better if we slide the final fly-off back two to three months.”

A media programming campaign will be built around the fly-off, but Lighter said it was too early to provide specifics.

The teams participating in the fly-off will have the option of sending up a human rider or a lifesize mannequin. Finalists will put their machines through a specified series of maneuvers, and will be scored on the basis of vehicle size, speed and noise.

GoFly will award the $1 million grand prize to the top-scoring team. Prizes worth $250,000 each will go to the quietest vehicle that meets the contest’s requirements, and to the smallest compliant vehicle. There’s also a Pratt & Whitney Disruptor Award worth $100,000.

Lighter said GoFly’s mission is to “catalyze the technology” for personal flight — while leaving it up to the participating teams to find the right niche for their technologies. “GoFly believes that it is the public’s opportunity to be able to decide what fliers are best for what uses,” she said.

She drew a comparison to the automotive industry, where customers can buy a minivan, a convertible, a sedan or a pickup truck, depending on how they want to use those vehicles.

“World, you get to decide what’s best for all of you,” Lighter said.