Another holiday season, and another epic GeekWire Gala.

We had a blast welcoming hundreds from the Seattle community to our ninth annual GeekWire Gala, presented by First Tech Federal Credit Union.

Party-goers mingled with old and new friends while belting out their favorite karaoke songs and dancing the night away at the The Showbox at the Market in the heart of downtown Seattle, celebrating the end of 2019. A few — including the team at Moz — showed up in their PJs and other fun holiday garb. 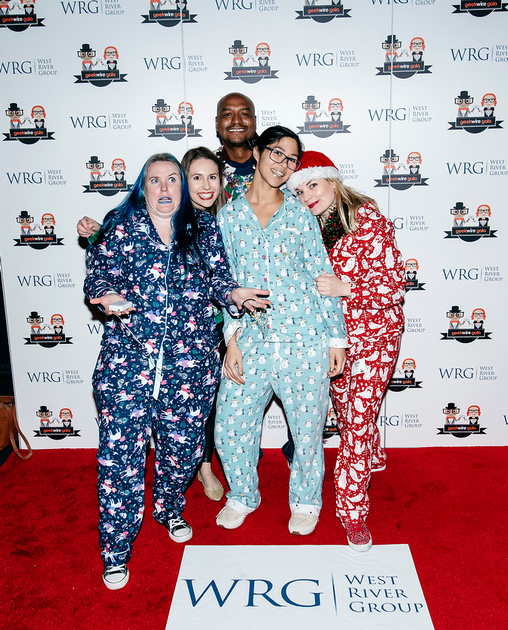 A holiday party with Dick’s cheeseburgers is our kind of party. We had a blast tonight, thank you @geekwire! #gwgala pic.twitter.com/PuJqEYbx8w

Thank you @Taylor_Soper for snapping this pic of @carrie_k & me having a blast at the @geekwire gala. It was a blast! ? pic.twitter.com/YLTYDUd7VK

If you haven't been, visit the #GWGala karaoke lounge downstairs! (Follow signs to the left of the front door.)

What will you sing? pic.twitter.com/zB0Yzsahs3

Thank you everyone. Happy holidays from GeekWire! #gwgala #seattle #tech

The “Ugly Sweater” contest made its return, and once again some impressive entries were spotted on the Showbox stage. Jacob Colker, managing director of the startup incubator at the Allen Institute for Artificial Intelligence in Seattle, beat out tough competition with a colorful and festive green sweater featuring red and silver ornaments. He won roundtrip airfare tickets from Alaska Airlines.

We also spotlighted the winners of our third Geek Style Reboot, a special package presented in partnership with Nordstrom in which two hard-working geeks — Nadia Daniel and Brendan Weitzman — got a day of pampering at the retailer’s flagship store in downtown Seattle.

A few lucky folks walked away with Nordstrom gift cards, just in time for holiday shopping. And GeekWire member Minh Le — market manager in Silicon Valley Bank’s Seattle office — not only wowed the crowd in the karaoke lounge, but also took home the prize in the special membership giveaway: A new Sonos Move portable smart speaker.

Check out the Moz photo booth shots below, or take a gander at fun action on the WestRiver Group red carpet here. Folks looked fabulous, so thanks for celebrating in style with us. Of course, this holiday tradition would not be possible without our GeekWire Gala sponsors. They are: