At first glance, the GeekWire 200 might not seem that different today than it did a year ago. But a closer look shows some of the region’s most valuable companies rising steadily in our ranking of the Pacific Northwest’s privately held tech startups.

The trend was driven by large funding rounds and significant growth among the Seattle region’s unicorns, tech companies with valuations of $1 billion or more.

Also rising on the list were two companies that are approaching unicorn status: pet-sitting marketplace Rover (No. 3) and mobile remittance company Remitly (No. 5), which raised $135 million in equity in July. 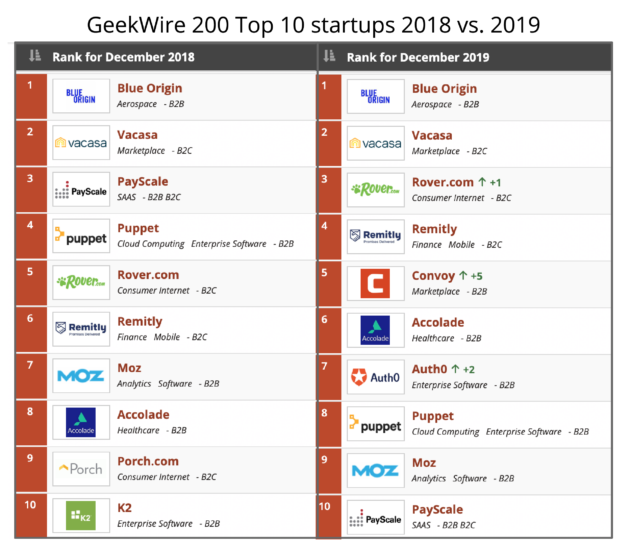 But overall, 23 of the top 25 startups on the GeekWire 200 are the same as a year ago. One reason: merger and acquisition activity in the region has been relatively quiet.

We launched the GeekWire 200 seven years ago to help identify the next wave of influential tech companies emerging from the region — a new Microsoft, Amazon or Expedia, for example. Over the years, it has proven to be a strong indicator of startups that are positioning themselves to go public or be acquired by larger companies.

The GeekWire 200 is derived from our broader database of Pacific Northwest tech startups. The rankings are generated from publicly available data, including social media followings, approximate employee counts (via LinkedIn) and inbound web links.

The index heavily weights employee growth, which is often one of the most clear signs of momentum. But that’s not always the case as we learned over the past week when high-tech football helmet maker Vicis, No. 56 on the list, laid off more than 100 employees and was put into receivership. We are continuing to monitor the situation and will reevaluate Vicis’ inclusion on the GeekWire 200 with the next monthly update.

At the top of the GeekWire 200, space venture Blue Origin and vacation rental management platform Vacasa remain in the No. 1 and No. 2 positions, respectively.

Blue Origin’s employee count is up by more than 800 employees to around 2,500 while expansion plans rush ahead in the Seattle region and Los Angeles. Backed by Amazon CEO Jeff Bezos, the company closed out the year with the 12th test mission for the New Shepard suborbital spaceship.

It was also a year of growth for Portland, Ore.-based Vacasa, the newest Pacific Northwest unicorn. The company grew to more than 500 employees across its Portland and Boise offices in 2019, in addition to its boots-on-the-ground workforce. It plans to add roughly 2,000 more people in the coming year. Vacasa raised $319 million in new funding to fuel expansion, finalized its $162 million acquisition of Wyndham Vacation Rentals, and signed a deal with Google to have its properties show up in Google search results.

More insights from the GeekWire 200

Over the past year, we increasingly used the data behind the GeekWire 200 to answer questions about the state of startups and the region’s tech industry. If you missed any of these in-depth analyses, a full roundup is below. Which trends should we dig into next year? Send suggestions to editor@geekwire.com, or contact us on Twitter.

Digital health startups rise in the Pacific NW, fueled by enterprise tech and AI talent: Digital health has become one of the hottest areas of healthcare, attracting both tech entrepreneurs and gobs of venture capital. In the past year, companies in this industry shot up the GeekWire 200. Read more.

Microsoft veterans lead nearly 25% of Seattle region’s top tech startups, GeekWire analysis shows: It all started with a tweet. Investor Kirby Winfield felt like Microsoft was far more important to the startup scene of the Pacific Northwest than most people realized. He called on GeekWire to do some more digging. Read more.

The hidden legacy of aQuantive: How Microsoft’s $6B loss became a win for the Seattle tech industry: Microsoft bought Seattle-based advertising technology firm aQuantive for $6.3 billion in 2007 in what would later be seen as an epic blunder. But the story didn’t end there: The former aQuantive executives, entrepreneurs and investors who emerged from ashes have gone on to play key roles in building the Seattle-area’s tech ecosystem over the following decade. Read more.

GeekWire 200 startup index analysis shows hottest industries emerging from Pacific Northwest: The quality of local startups in a region can often indicate the future of a tech ecosystem. To find out what the future may have in store for the Pacific Northwest, we analyzed companies that recently joined the GeekWire 200. Read more.

A new world for unicorns: What the WeWork flop means for Seattle’s top startups and IPO prospects: WeWork’s dramatic fall from grace was just one example of a larger reckoning on newly public companies. Investors also trimmed the valuations of companies in the Pacific Northwest that went public since 2018. What does this all mean for the next crop of startups with high valuations that might go public? Read more.

Latest changes in the index

Eleven startups debuted or returned to the GeekWire 200 this month, due in part to ongoing updates to GeekWire’s Startup List, which now features more than 1,300 Pacific Northwest startups. Don’t see your company on the list? Submit it here.

Here are the latest additions to the GeekWire 200:

And finally, here were the month’s biggest movers:

The GeekWire 200 — sponsored by CenterCard — is derived from our broader list of more than 1,300 Pacific Northwest tech startups.

Thanks to everyone for checking out this month’s ranking. And, just a reminder, if you value resources like these, be sure to check out our list and map of out-of-town tech companies with Seattle engineering outposts as well as our list of startup incubators, co-working spaces and accelerators in the region, startup fundings, and our GeekWork job board.