Frank Mycroft and his co-founders started with a simple idea: People don’t like going to the gas station. A mobile fuel delivery service powered by technology could solve that problem.

Four years later, customers — and investors — are proving that theory out.

Delivering gas seems easy on paper. But there are a ton of technological, regulatory, logistical, and environmental hurdles to get over to actually make it a sustainable business.

Booster has emerged as the market leader. The 4-year-old company delivers millions of gallons per month in 20 cities, using its purple-branded trucks to fill up tanks on corporate campuses. Fortune 500 giants such as eBay, HPE, and Cisco use Booster to provide a fueling perk for employees. Health clubs and retail centers are also customers.

There have been a total of two million individual Booster deliveries completed, a number that doubled over the past eight months.

Users can request gas from Booster with a few buttons on its app and a service professional — who are Booster employees and receive benefits — shows up soon after in a custom-built mini-tanker to refuel the vehicle. The company is able to offer similar prices to what you’ll find at the local gas station and does not charge a service or subscription fee.

Booster also recently expanded to service business fleets, working with companies that use a large number of vehicles and need frequent fill-ups — everything from ambulances to autonomous cars to Stanley Steemer vans.

“There’s a lot of moving pieces that have come together,” Mycroft said. “It’s taken us four years to really get this engine fine-tuned.”

Booster originally launched in Seattle but relocated to Silicon Valley. It operates in the Bay Area, Los Angeles, Dallas-Fort Worth, and San Diego regions, with plans to expand nationwide with the fresh cash.

“Booster has demonstrated the ability to address a key operational and logistical challenge for us – fueling vehicles at one of our large airport locations,” Bob Wetzel, vice president of corporate development for Enterprise Holdings, said in a statement. “The end result is a significant reduction in cost, plus an increase in our efficiency. As a result, we identified the potential of delivering this kind of service on a larger scale nationwide.”

Mycroft is a former Boeing engineer and previously worked at Redmond, Wash.-based Planetary Resources. He said there are multiple trends that Booster is riding, namely:

Booster is able to keep its prices competitive with incumbents because it eliminates the fuel delivery middleman and other associated costs of operating a physical gas station. 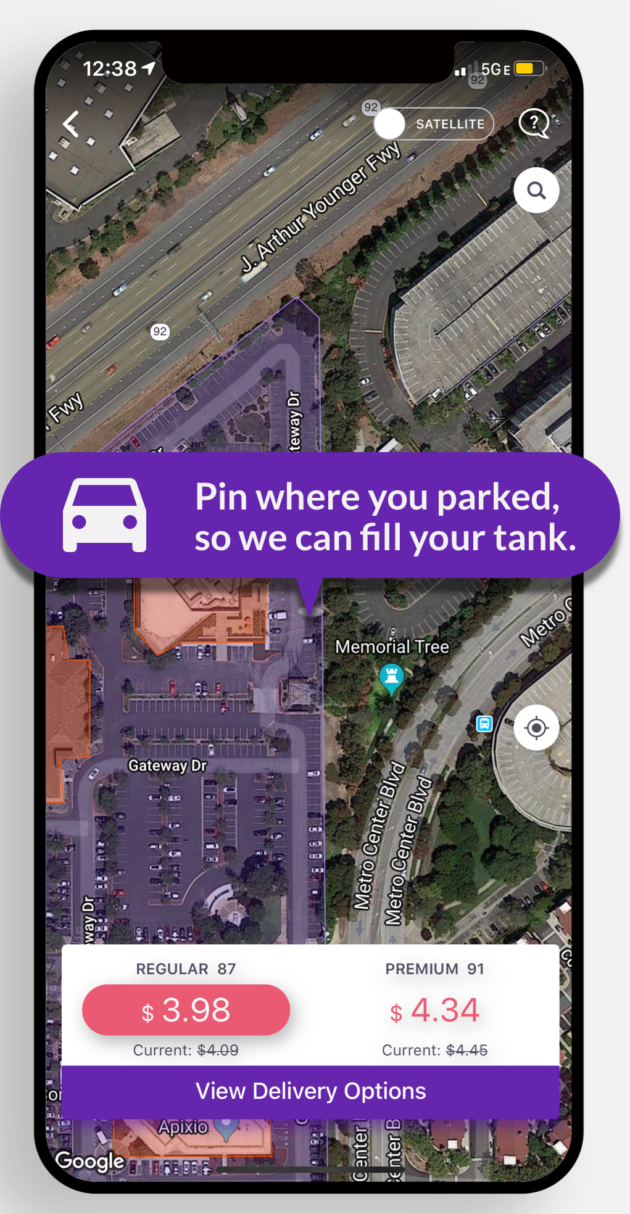 “We make money by using tech to effectively to cut out all of those unnecessary costs,” Mycroft said, adding that its business is analogous to the shift from physical retail to e-commerce.

Booster was generating $180,000 in revenue per day this past November; that number has surely increased since then (we’ve followed up with Booster to get an update).

The company is profitable in its more mature markets. “We have a model that works,” Mycroft said. Booster’s trucks average more than 10 deliveries per hour, per driver.

“If you look at any benchmark of on-demand anything, that is a very high number,” Mycroft added. “It allows us to pass on savings to customers.”

Mycroft said Booster’s model can also be used for alternative energy solutions. But he noted that the top 20 selling car models are all still powered by gas. The startup estimates that the gas industry is worth $2 trillion.

“The future is bright, regardless of the adoption rate for EV,” said Mycroft, who co-founded the company with Diego Netto and Tyler Raugh.

Competitors include startups such as Yoshi and Filld, which has run into regulatory roadblocks. Mycroft said Booster also faces challenges to meet regulatory and sustainability standards but is optimistic about his company’s position.

“Fire departments love our model because we fuel on private property,” he noted, adding that Booster reduces smog emissions by 25 percent compared to the average gas station.

Booster’s headcount has doubled over the past year to nearly 200 employees, with plans to grow that number.