In tech, it’s rare for someone who’s been successful starting and selling companies to quit that work around the age of 40. It’s rarer still for that person to dedicate him/herself to funding charitable organizations worldwide, and start and fund a foundation dedicated to that cause.

That is exactly what Alexandre Mars has done. Instead of powering up and making more money via starting more enterprises, he founded the Epic Foundation, which is dedicated to making “giving the norm” for businesses and individuals worldwide.

Dubbed the “French Bill Gates,” Mars achieved early success by anticipating what an online market would need, especially in mobile, and delivering it. He sold his mobile marketing agency Phonevalley to Publicis, and his social media management company Scroon to BlackBerry. By 2013, he was done with founding and selling internet and mobile companies, and decided it was time to give back.

Mars still invests through his VC firm blisce/ in companies including Spotify, Pinterest, Casper and Harry’s, but most of his time is dedicated to the Epic Foundation, and he runs it like a VC firm. Charities are fully vetted, numbers crunched, and then finalists are visited to select who they will support.

Progress is fully reported for donors, who can take comfort in the fact that Epic has done all the hard work finding and selecting reputable orgs. Epic also gives 100 percent of all donations to supporting these causes, with Mars picking up the tab of his foundation’s operating costs.

Mars says that full transparency is essential for getting more people comfortable giving, and it should add joy to their lives. Most people and companies cite three reasons why giving is problematic for them: They don’t know where to give, they don’t have time to research charities, and they don’t trust their money is being spent well.

We talked with Mars about his new book Giving: Purpose is the New Currency, and why the future of any company should include a strong philanthropy program. 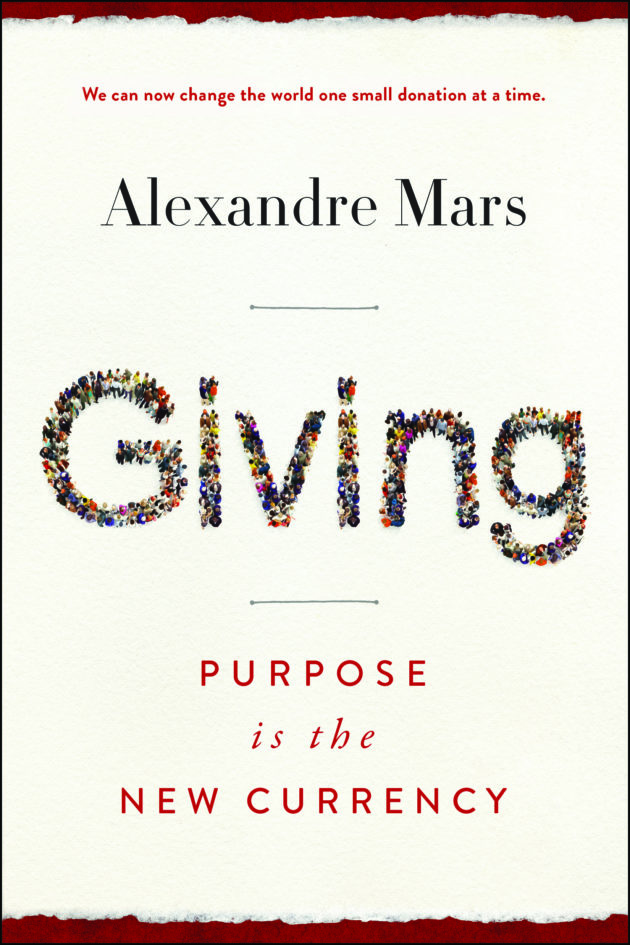 Why the book now?

This book was there for some time now, maybe since I started Epic four years ago. It makes more sense to release the book now that we have a track record. It’s not just something on paper, it’s the difference between a theory and what we’ve been able to achieve.

In the last 20 years, whatever I’ve been building, it’s always been, “Let’s wait first to see results so then we can talk about the results.” When you start something, anything, you can have such a great team and a great product, but everything is about the timing. If you are too early, or if you are a bit late, everything you have been building will have been a failure.

The growing gap between the poor and uber-wealthy, what specific challenges does that pose to giving in the near term? Any opportunities this presents?

I’ve witnessed a mindset shift. For years, philanthropy — and you think of the Gates and Bezos of the world — was only for the uber-wealthy. And now people are starting to realize that philanthropy should be for everyone, because why should only people with a lot of money be able to do good? That makes no sense. Everyone should be able to do something. Everyone should have access to the solutions to be a part of this new tribe.

That is important to me. We’re not asking people to give 50 percent of what they have. We’re not asking for any numbers. What we’re saying is for you, me, Bill and Melinda, what works? Two percent, 5 percent? It’s whatever you consider the right number, because giving has to be painless. If it is painful, it will be joyless — and giving should always be a source of joy.

From payroll giving to the Epic Sharing pledge, we provide many tailor-made solutions so everybody can become a philanthropist.

Our times right now are especially divisive, when giving and especially supporting people from other nations is seen as “socialism” by some. How is this affecting Epic’s work?

What I’ve seen in the last three years is that you have this massive trend, mostly coming from millennials, that they put purpose at the very center of their universe. Purpose is the new currency for them.

Fifty percent of the global workforce will be under 30 in a few years, and that will change the game for sure. Like their predecessors, millennials want to be successful in their work and career, but they also want to understand what their company will do with that success, and how they use that success to impact the community.

Millennials are leading that movement, but other generations are following, and this pressure forces businesses to adapt and to understand how they can embed purpose in their business.

How does Epic work to implement social good in a pain-free way?

When discussing the payroll giving, it’s asking employees to give something out of their paycheck — and have the company matching the donation to maximize the impact — something easy to do, and now it’s easy to implement.

We are also going after payment systems, the ADPs of the world, the big software players, that they should have this as a feature, and all their sales reps should be able to go out and explain the software, and say, “By the way, we have this feature, and Mr. HR, you should know this, and your employees will be happy with this.”

We’re receiving so many messages every day across the U.S. from the very bottom of food chain to the very top, how can we part of Epic? We are giving examples, like implementing payroll giving on your paycheck, or to go ask your bar owner to implement the transactional giving. Every time I close a tab I should have an option to add one dollar or 50 cents.

One thing that is working very well is our pledge for entrepreneurs. They want to be a part of Epic and say, “I know we’ll give money when we go public or being acquired,” and we tell them, “Don’t wait to be a part of this journey. Pledge a percentage of your shares now to Epic, whatever you feel is good, painless, and then you don’t have to wait.” In the next two, three, five years, it will be your story and part of your DNA, so when you recruit and talk and raise money, it will be a clear message you’ll be carrying. If you do this other people will join you.

What are your thoughts on Jeff Bezos and Day One?

People will compare Bezos with Gates. And a lot of people will say, “Why did it take you so long?” For me, so many times, you are eager to judge, you don’t understand, why, why, why?

In Bezos’ case, it’s too early to say. One of the most difficult things is to measure impact, so maybe for Gates, after 18 years, you can easily say, what Melinda and Bill Gates built is exceptional. They have saved so many lives. They have changed systems. They have pushed people to think about philanthropy differently, we are very different. So for them, it’s going after the uber-wealthy, they have to give 50 percent.

Even the term philanthropy is billed and framed for the wealthy. For me, philanthropy has to be for everyone.

Back to Bezos. For now, there is no impact yet, and I do think he wants to have a systemic impact. We need to wait a bit like the Gates to see the track record there. I think it’s going toward the right direction for sure. Jeff will donate $2 billion, he wants to make sure the money is well used. Great he’s doing it, it’s a bit worrisome why it took him so long to do it, and that takes me back to the judgment piece, but it’s a good thing he’s doing it now.

What are your goals for expanding in 2019?

At Epic, the goal is not to go after the Verizons and say you should implement this or that. It’s to find some of them and make this systemic, working with the software editors in these cases, to make everyone understand it’s easy, it’s painless, and if we’re able to do this, it will become systemic.

And same for investment firms, VCs and partners, why not give 1 percent minimum of your carried interest? It’s painless, but it proves something. In the world of 2019, where we have a lot of money and a lot of investors want to invest in the same business, sometimes it’s a great way to differentiate yourself. Entrepreneurs have the choice between term sheets on the table, and they want to stand where you are as investors.

Hopefully, we won’t only need the Bezos and Gates of the world, but everyone at his or her level will be able to be part of that journey. For me, it’s very important to make everyone part of the journey. This is what I will be doing for the rest of my life. I can’t stand what I see, and I’m trying to do everything I can to fight for the underserved.

Giving: Purpose is the New Currency by Alexandre Mars is out now.