“Destination Moon,” the traveling exhibit making its debut at Seattle’s Museum of Flight this month, puts some of the greatest treasures of the Space Race on display. But if you know where to look, you’ll also spot little treasures that shed light on the life of Apollo 11 commander Neil Armstrong.

For example, take a close look at the picture of two men and a boat, hanging over the black-and-white TV in what looks like a wood-paneled living room. It’s a reproduction of a portrait that astronaut Wally Schirra commissioned as a joke.

The painting shows Armstrong in the company of another Apollo astronaut, Pete Conrad, who ran the boat aground because the two of them got distracted by some water-skiing horseplay.

Neil Armstrong’s 55-year-old son, Mark, says the episode taught his father and Conrad a valuable lesson: “Even the best pilots in the world can end up grounded if they’re not paying attention,” he told me during a sneak preview of the exhibit.

You’ll find many such personal touches surrounding the centerpiece of “Destination Moon: The Apollo 11 Mission” — the Columbia command module that Armstrong and the two other Apollo 11 astronauts, Buzz Aldrin and Michael Collins, rode to lunar orbit and back in July 1969.

In one corner of the exhibit hall, there’s Neil Armstrong’s “short-fat” flight suit, festooned with zippers, Velcro fabric and NASA’s logo. The only problem with the suit was that its legs were a little too short, and the waist was a little too roomy. After Armstrong retired from NASA, it became one of his favorite coveralls to wear while working on his farm in Ohio. You can still see flecks of paint on the pant legs.

Nearby are the fragments of the original 1903 Wright Flyer, laid out in a display case. The Air Force asked Armstrong to carry the precious bits of fabric and wood to the moon and back — and made him an offer he couldn’t refuse. Mark Armstrong tells the story in this special episode of the GeekWire Podcast:

“Destination Moon” features more than a dozen artifacts lent by the Smithsonian Institution’s National Air and Space Museum, which had to clear out some of its own exhibit space a couple of years ago for extensive remodeling. The show-stopper is the 13-foot-wide command module, with its hatch removed and displayed separately a few yards away. You can see the scorch marks that were burned onto the spacecraft during its atmospheric re-entry at the end of the Apollo 11 mission.

A nearby computer screen lets museumgoers swipe and tap their way through a virtual 3-D model of the spacecraft’s interior.

The Smithsonian is also letting the Museum of Flight display Aldrin’s spacesuit gloves — as well as his golden helmet visor, which reflected Armstrong’s image in what’s generally considered the best-known picture from the Apollo 11 moonwalk. A giant version of the same picture, in black and white on the front page of The New York Times, is posted on the wall behind the visor.

“Destination Moon” has already made stopovers in Houston, St. Louis and Pittsburgh, but as far as the Museum of Flight is concerned, it’s best to be last: The Smithsonian’s artifacts will be on display here during the actual 50th anniversary of the Apollo 11 moon landing on July 20. That adds an extra bit of timeliness to the show in Seattle.

Seattle’s version of the show is special for another reason: The Museum of Flight is adding its own extensive collection of space artifacts to the mix, including full-scale engineering mockups of Boeing’s lunar rover and the buglike Apollo lunar module.

The featured items also include components from the actual F-1 rocket engines that powered the Saturn V moon rockets off the pad. Those rusty, twisted, beautiful pieces of rocket hardware were recovered only a few years ago from the bottom of the Atlantic, and were divvied up between the Museum of Flight and the National Air and Space Museum. 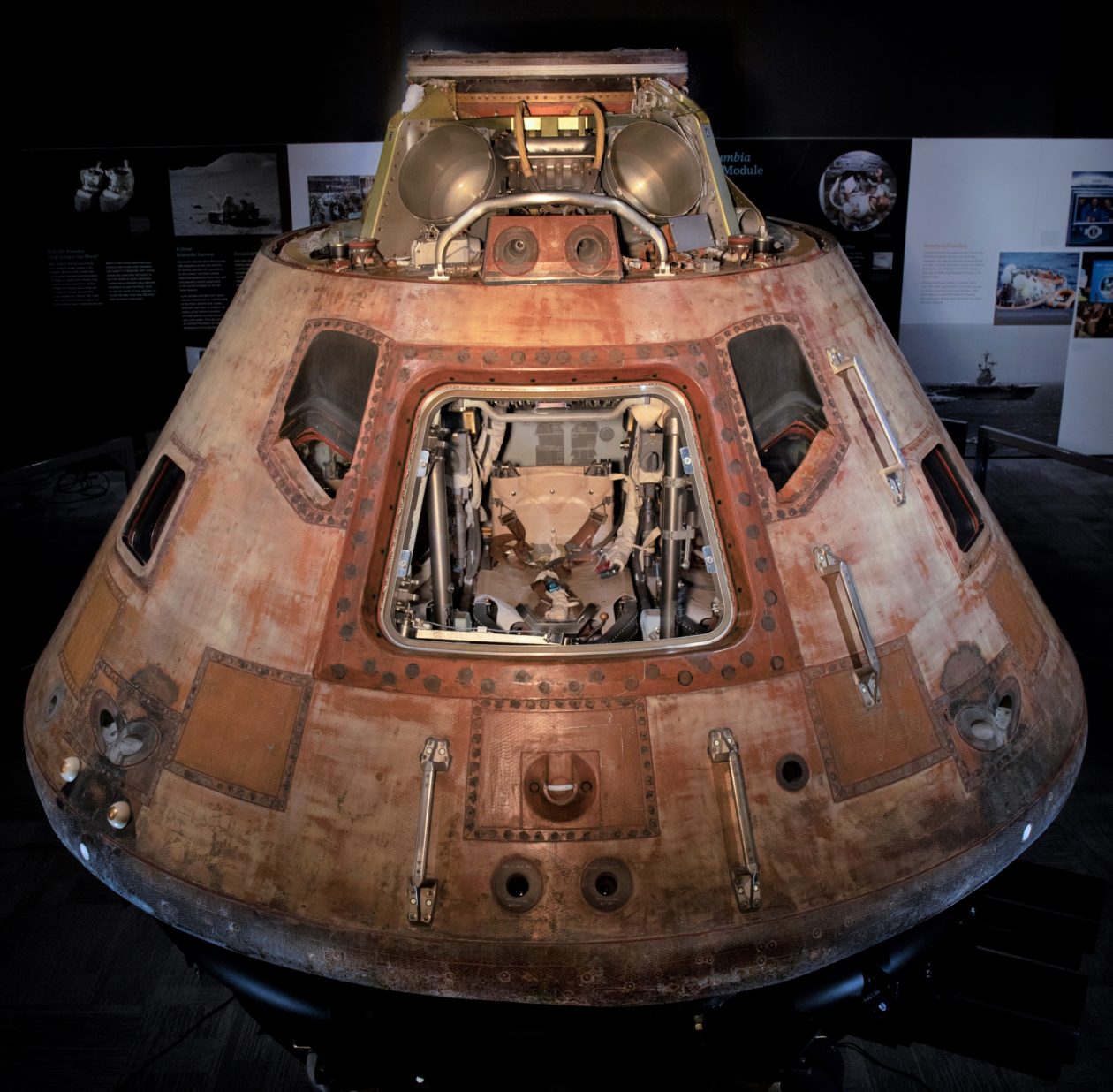 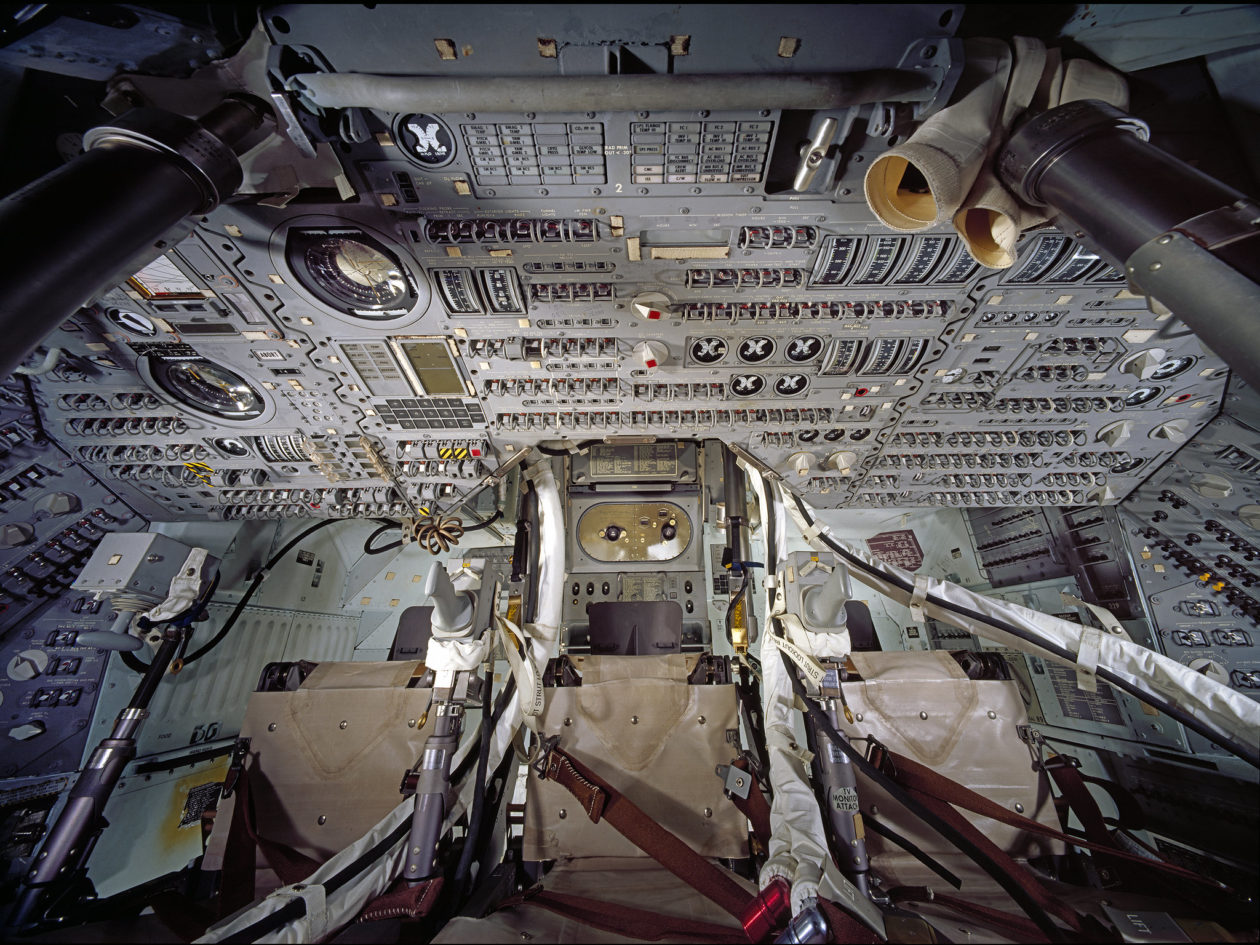 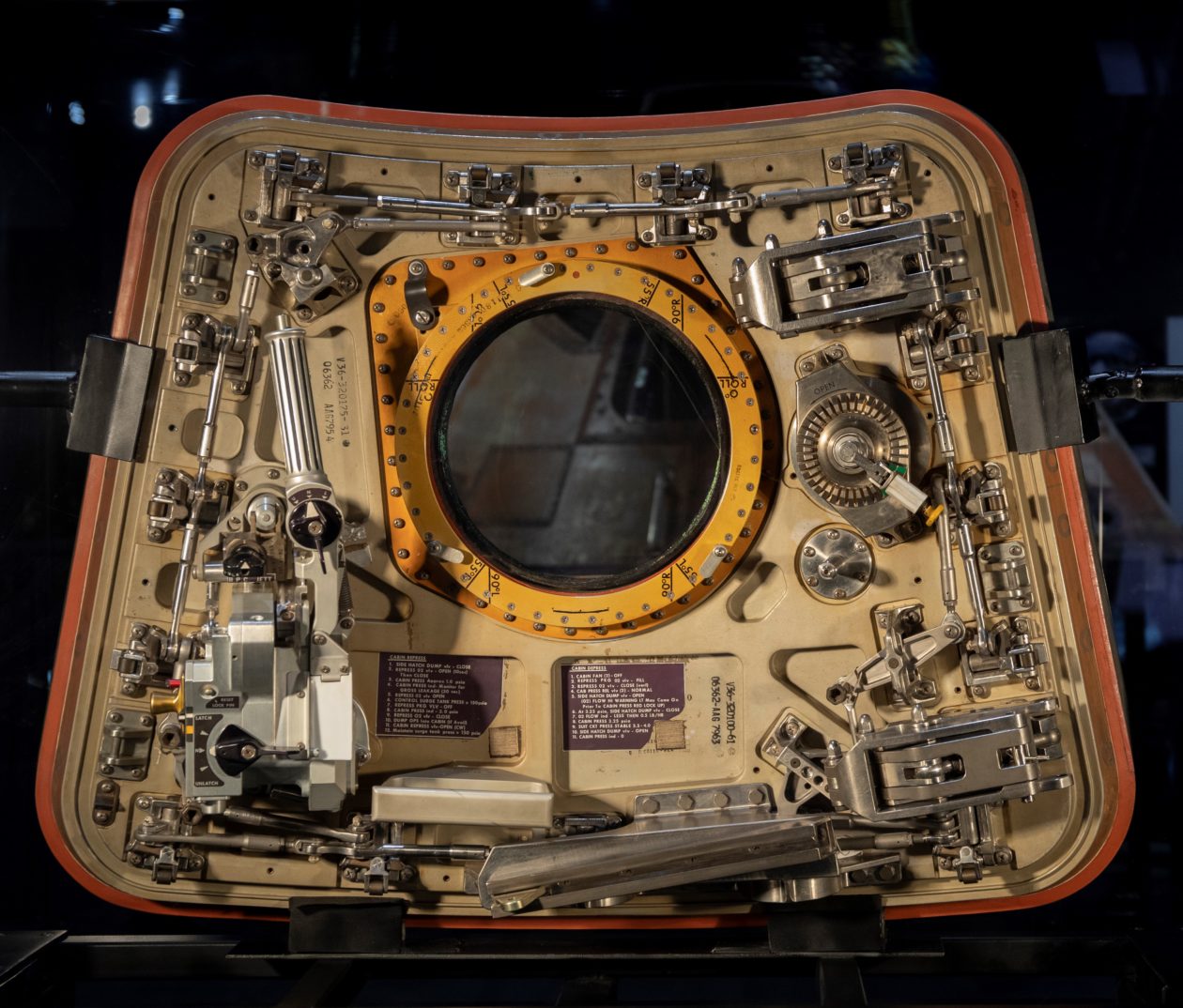 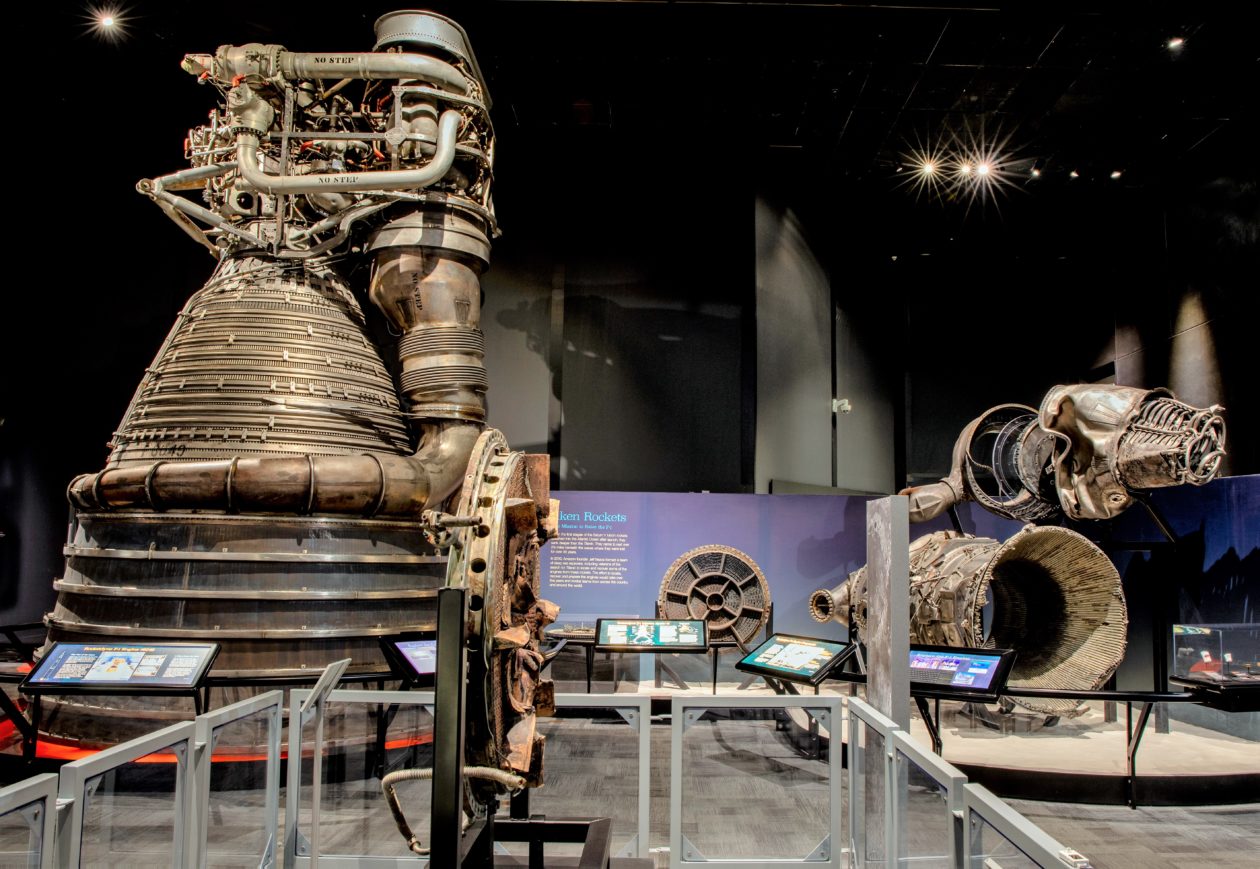 An unused F-1 rocket engine stands alongside the remains of engine components recovered from the bottom of the Atlantic Ocean. (Museum of Flight Photo / Ted Huetter) 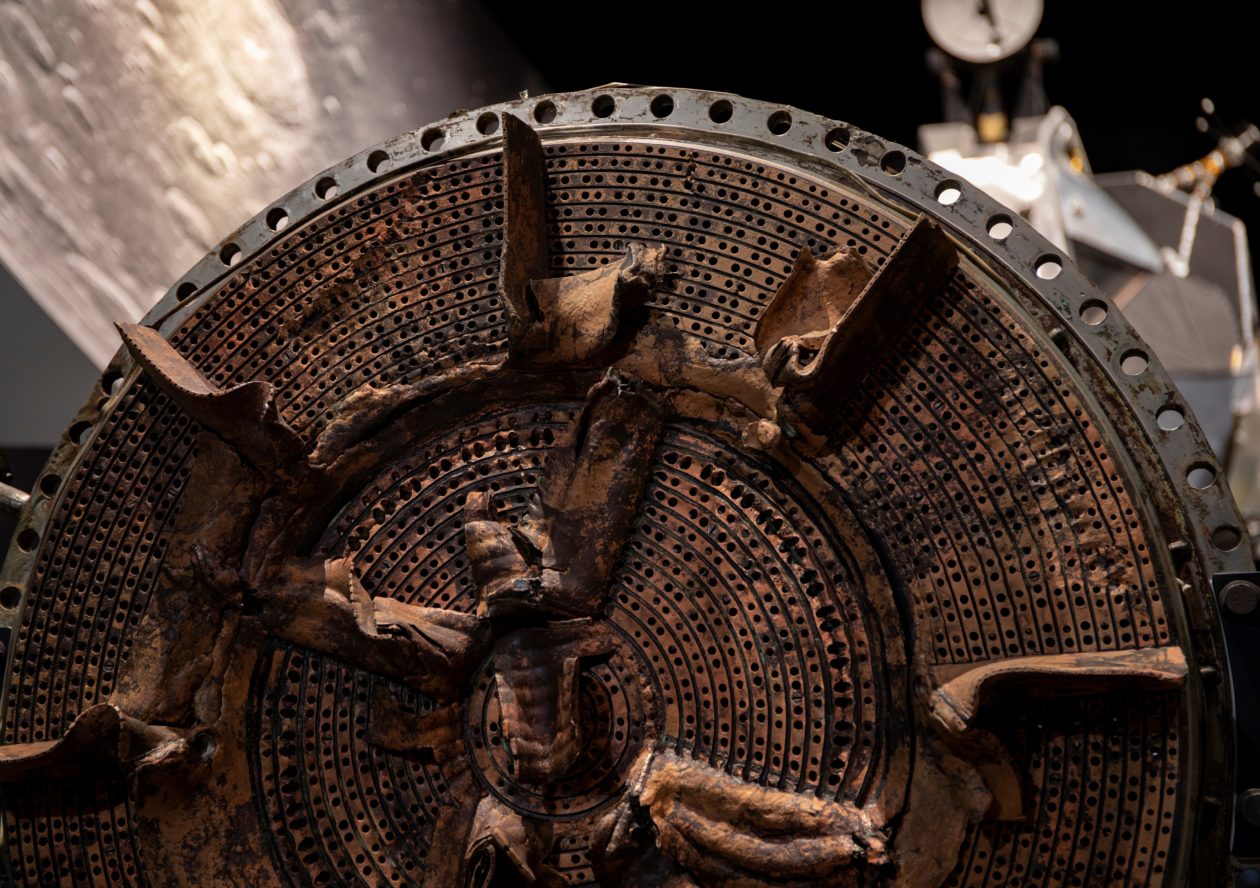 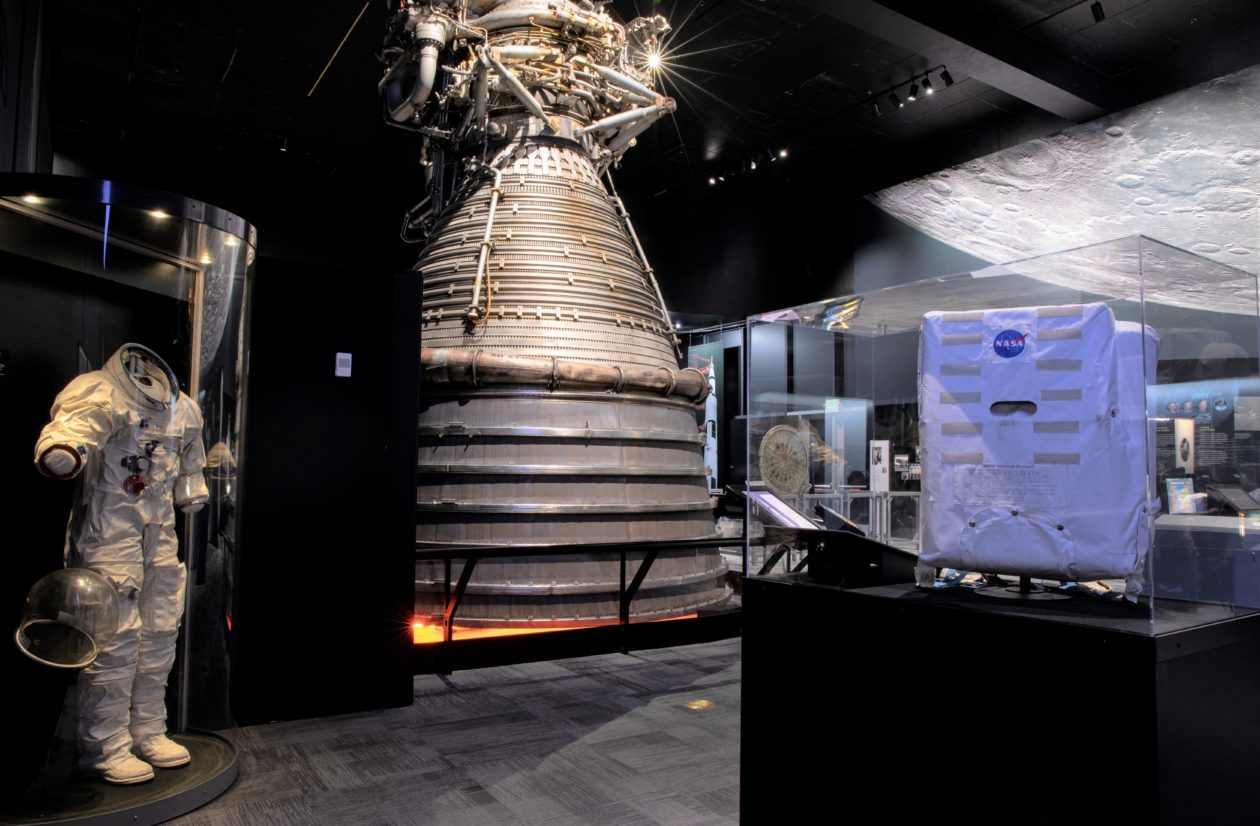 A spacesuit used by NASA astronaut John Young during Apollo 10 training is on display in “Destination Moon.” (Museum of Flight Photo / Ted Huetter) 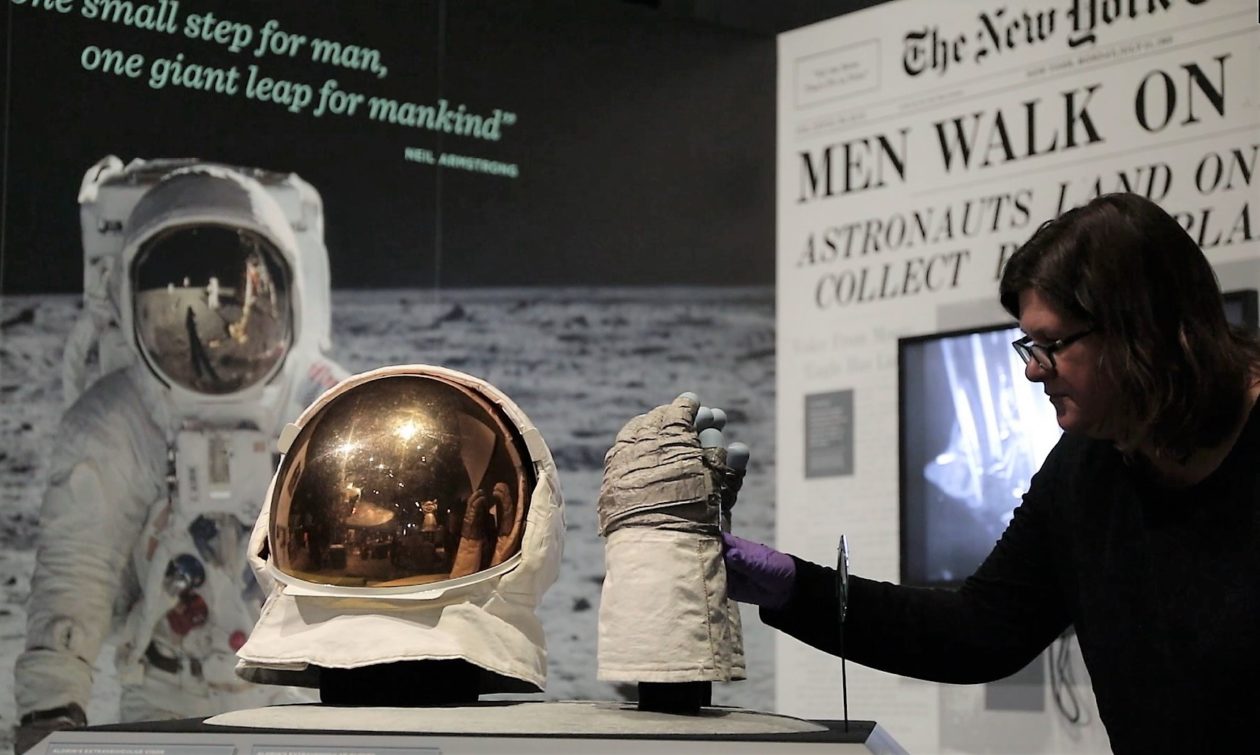 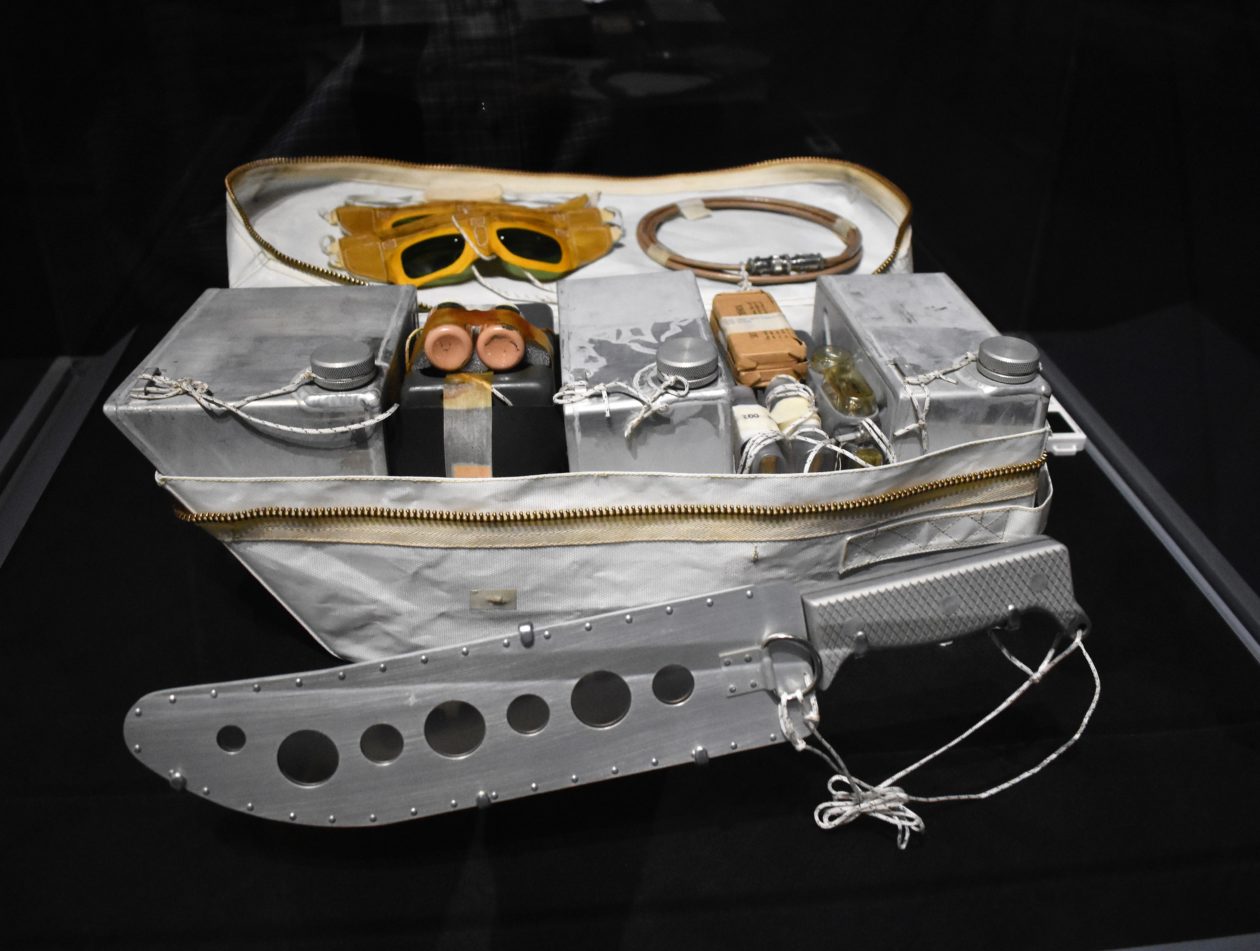 Apollo 11’s survival kit, to be used in the event of an off-target splashdown, included three pairs of sunglasses and a machete. (GeekWire Photo / Alan Boyle) 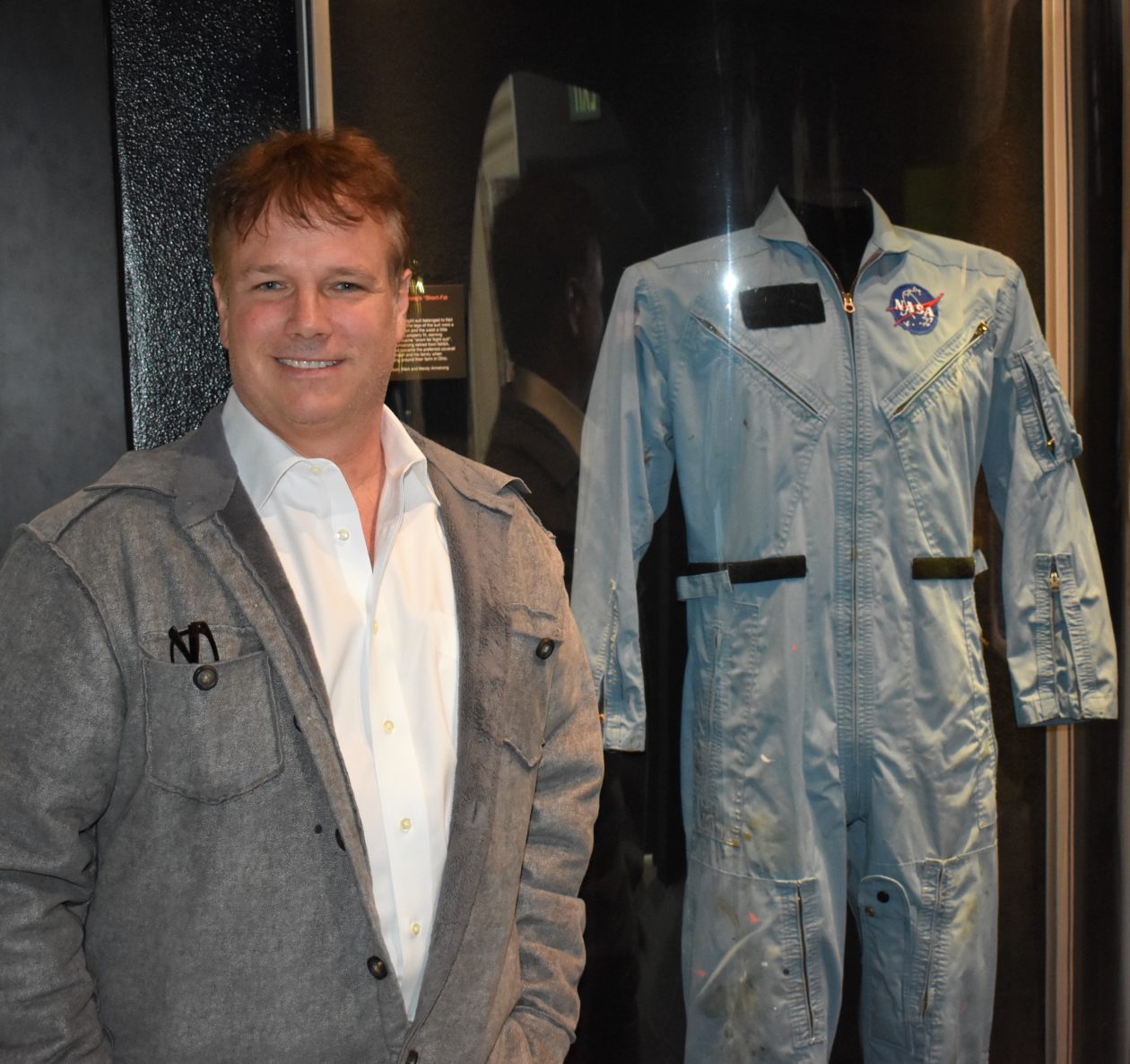 Mark Armstrong stands beside the “short-fat flight suit” that his father ended up using as a coverall for farmwork. (GeekWire Photo / Alan Boyle) 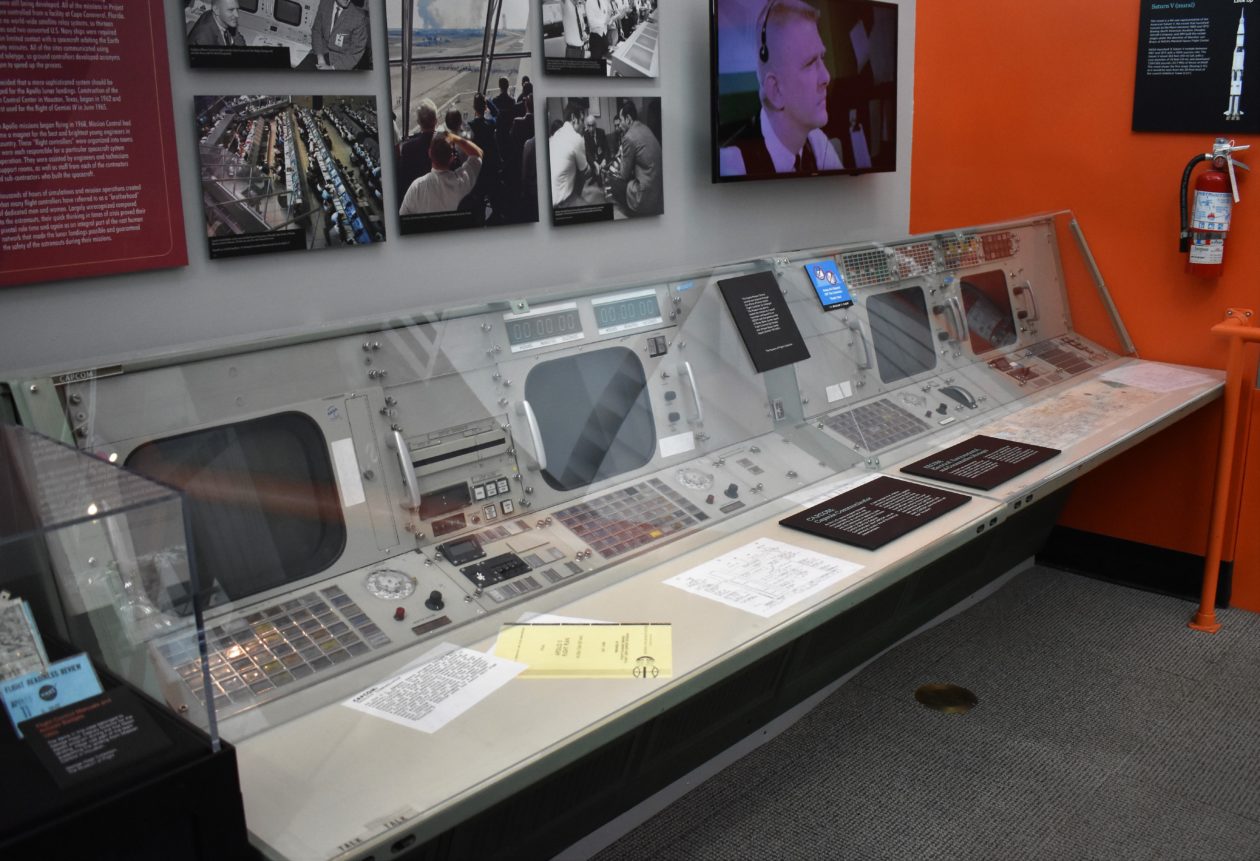 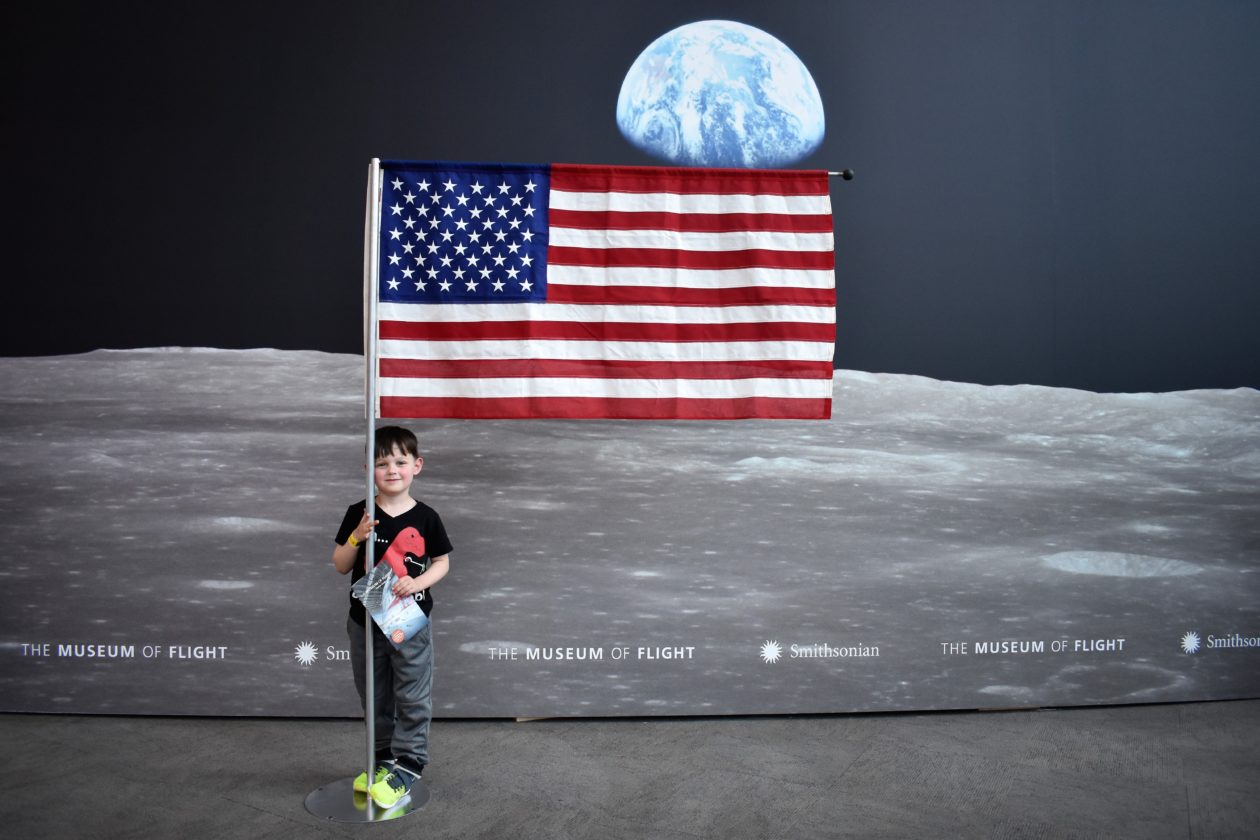 There’s also a set of consoles from NASA’s old Mission Control, an Apollo 12 moon rock that was lent to the museum, and scads of toys, banners and memorabilia from Apollo’s heyday. The Seattle show even gives the Soviets a share of the spotlight, with displays featuring a replica of the Sputnik 1 satellite, a Resurs 500 space capsule and a  spacesuit made for Moscow’s early cosmonauts.

Fifty years after the moon landing, many of the items from those days look like antiques. The Apollo survival kit — complete with a wicked machete, three pairs of groovy ’60s sunglasses and two bottles of sunscreen — is clunky enough to fit right in at a flea market sale.

That clunkiness is part of the exhibit’s appeal, Mark Armstrong said.

“If you look at all these pieces of technology — which seem quite primitive, but were very effective — I think that really shows what can be achieved by hundreds of thousands of people when they all work together toward a common goal,” he said.

Much has changed since Neil Armstrong took that one small step on the moon — a step that he hoped would represent a giant leap for humanity. Much has changed even since Neil Armstrong passed away in 2012, just as the commercial space revolution was picking up steam. Back in 1969, the idea that billionaires would be able to fund their own space programs might have sounded as outlandish as the idea that no humans would set foot on the moon after Apollo 17 in 1972.

Mark Armstrong said the surviving Apollo astronauts and their families see the 50th anniversary as a time for looking ahead as well as for looking back.

“We all feel the same way,” he said. “We feel like we are ambassadors for space exploration, and we are thrilled to be a part of bringing that excitement to the next generation. Hopefully we can ignite in them the same kind of passion that we felt when we were younger.”

I asked Mark Armstrong what his father might have said if he were present for the 50th anniversary.

“Whatever he would have said,” Armstrong replied, “it would have been perfect.”

“Destination Moon: The Apollo 11 Mission” opens to the public at Seattle’s Museum of Flight on April 13. Timed-entry tickets are required for exhibition. Tickets are $10, plus the regular museum admission fee. There’s a sneak preview for the Museum of Flight’s members on Sunday, April 7, from 10 a.m. to 5 p.m. Space is limited, and reservations are recommended. The exhibition will also be open for Yuri’s Night partygoers on April 12. Other special events will take place during the exhibition, which runs through Sept. 2. Check the Museum of Flight’s calendar of events for updates.

“Destination Moon” was developed by the Smithsonian Institution Traveling Exhibition Service and the National Air and Space Museum. In Seattle, the exhibition is made possible through the support of Jeff and MacKenzie Bezos, Joe Clark, Bruce R. McCaw Family Foundation, the Charles and Lisa Simonyi Fund for Arts and Sciences, John and Susann Norton, and Gregory D. and Jennifer Walston Johnson. Transportation services for “Destination Moon” are provided by FedEx.