Car2go is implementing a new pricing structure in Seattle next month to encourage drivers to leave cars in the busiest part of town. Customers will be charged new fees if they leave their vehicles in certain areas. The move comes after ReachNow shut down in Seattle last month, leaving just two free-floating car-share providers in the city.

Car2go said the changes are designed to provide incentives for customers to drive cars to the highest-demand neighborhoods.

“The solution we have agreed upon with the city enables us to continue to provide carshare service to the entirety of Seattle’s city limits while also helping to mitigate some of the hurdles associated with serving areas of the city where our cars are rarely utilized,” said Kendell Kelton a spokesperson for car2go’s parent company, SHARE NOW.

Car2go, which launched in Seattle six years ago and has 140,000 members, is required to provide service across the city, per regulations set by the Seattle Department of Transportation. In 2016, SDOT expanded the required service area and lifted a cap on the number of vehicles allowed per company. The goal was to expand car-share access to underserved neighborhoods.

“Increasing the number of permits per operator, together with the expanded service area, could potentially better serve lower-income communities,” SDOT said at the time.

Starting Sept. 9, the company is also tweaking its pricing based on the time, location, and day of the rental. Pricing will vary from $0.35 to $0.49 per minute depending on where and when the rental takes place. Car2go previously charged a consistent $0.45 per minute rate.

In addition to pay-as-you-go rides, car2go offers hourly packages with a flat fees. Car2go is now limiting the mileage included as part of the fixed prices. For example, previously customers could pay $19 to drive for one hour and get up to 150 miles before the per-minute rate kicked in. Now the one-hour rate will be $19.99 to $24.99, and customers are limited to 60 miles.

For trips lasting more than one day, Car2go is lowering rates but no longer including mileage.

All new pricing will be noted in the car2go app. Car2go also charges a taxable $1 fee for the first 200 trips taken this calendar year. Here’s a more detailed breakdown of how package prices will change: 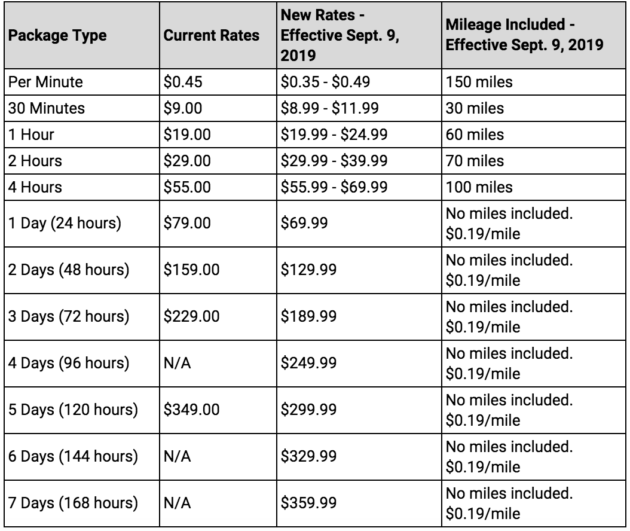 Earlier this year, mobility upstart Lime rolled out 500 LimePod vehicles in Seattle that compete with car2go.