Lime, the transportation startup valued at $2 billion, ran a beta test for the past three months with a small group of people that tried out the new LimePod vehicles.

Now anyone can use the Lime app and hop in one of 500 two-door Fiat 500 vehicles to get around town.

Seattle is the first city to get LimePods. The region has embraced the “free-floating” car-sharing model that lets customers pay for drive time on a per-minute basis and drop the vehicles off on any residential or metered parking spot within a given zone.

GeekWire tested the new Lime-branded cars in December — check out our review here.

Lime will compete against two other car-sharing services from ReachNow and car2go that already have a combined 1,500 cars available to rent in Seattle. ReachNow owner BMW and car2go owner Daimler plan to bring their urban mobility services under one roof as part of a joint venture that was recently approved by U.S. and European regulators.

Lime offers the cheapest per-minute rate at 40 cents. ReachNow and car2go charge 45 cents per minute. However, Lime does charge $1 to unlock a LimePod. And ReachNow and car2go do offer price caps — charges are maxed out at $15 for an hour of driving, for example.

Unlike the other two services, Lime requires users to take a photo of their vehicle before ending a trip. Users must have a valid driver’s license; a year of driving history; and be 21 years or older. Lime offers insurance and gas, just like the other services. 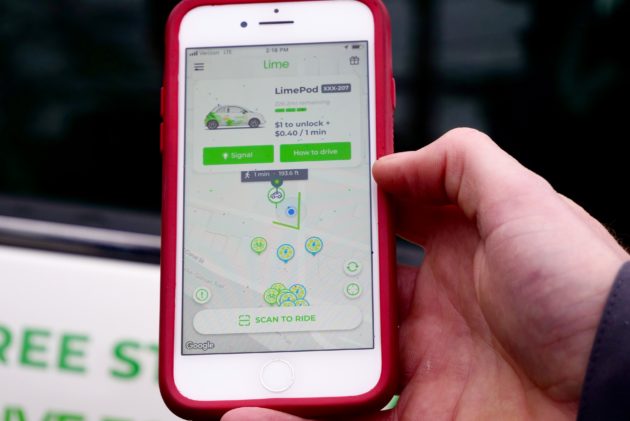 The company said it wants to have 1,500 LimePods on the road, and possibly more, which would make it the largest car-sharing service in Seattle. It will also launch LimePods soon in an unannounced California city.

Pete Dempster, a Seattle-based program manager at Lime who is overseeing the LimePod launch, told GeekWire that the LimePods will eventually be replaced by small, low-speed electric vehicles. Bloomberg hinted at these electric “transit pods” in May.

Lime also has more than 5,000 sharable bicycles across Seattle. The company, which is also investing heavily in scooter transportation (those aren’t available in Seattle —yet), operates in more than 100 cities across the globe.

Lime is part of a ground transportation industry being transformed by technology with ride-hailing, car-sharing, self-driving, and other new ways to get around cities. Its U.S. rival in the scooter race is Bird, which is focused solely on scooters and has also raised hundreds of thousands of venture capital dollars. Uber, meanwhile, recently acquired bike-sharing startup JUMP, while Lyft bought Motivate.