Microsoft PowerPoint is often criticized for ruining public speaking, given the temptation for presenters to simply read the slides they’ve prepared using the software — the phenomenon known as “Death by PowerPoint.”

But what if PowerPoint could make better public speakers instead?

A new PowerPoint feature, unveiled this morning, aims to do that. Called Presenter Coach, it gives automatic feedback to presenters when they practice their talks using PowerPoint rehearsal mode, telling them if they’re talking too quickly, reading too much from the slides, using filler words, profanity, or culturally insensitive phrases. After the rehearsal session, the feature produces a report with metrics that can be used additional practice.

“Presenting in front of a live audience is a vital life skill but also something that can spark fear and anxiety,” said Derek Johnson, a principal program manager on the PowerPoint team, demonstrating the new feature this week. “If I start to stutter, Coach is going to pop up and tell me to watch out for filler words because it can be distracting.”

In the demo, Johnson read a statement from a slide in the presentation, “When the satellite approached Jupiter, it discovered the rings around Jupiter as well as volcanic activity on the moon.” Presentation Coach detected the similarity and popped up on the screen, telling him to be more original.

Johnson explained, “We know this is something that contributes to a ‘Death by PowerPoint’ style of a presentation, and we want to help people avoid doing that.” 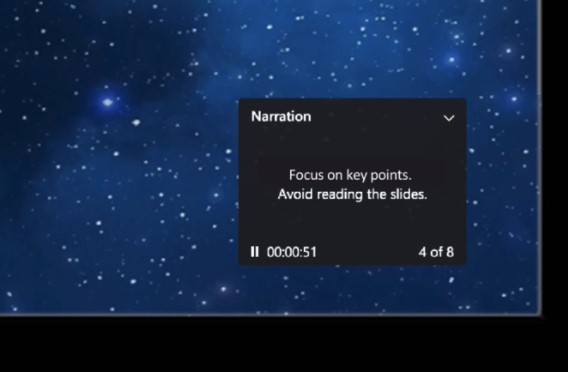 Presenter Coach works via PowerPoint for the web, so what about privacy?

Microsoft caches data from the Presenter Coach feature but purges the cache after five minutes if the data hasn’t been accessed again by the customer in the meantime, and purges all related data after 24 hours regardless of whether it has been accessed. These Microsoft articles provide more information on how the company handles data and where Office 365 data is located.

It’s part of a broader attempt to keep the 32-year-old program from going stale in the face of competition from apps and services born in the era of the web, mobile apps and artificial intelligence. Free and paid rivals to PowerPoint include Prezi, Google Slides, Apple Keynote, and HaikuDeck, developed by a Seattle startup of the same name and acquired last year by BookRags, a Seattle company that provides online teaching and learning guides.

The Presenter Coach feature, to be available later this summer on PowerPoint for the web, is the latest effort by Microsoft to use artificial intelligence and machine learning to enhance the capabilities of the presentation software. This started a few years ago with PowerPoint Designer, a feature that suggests visually appealing layouts for the images a user places on the screen. It can also help turn text-heavy slides into diagrams and timelines. Microsoft says Designer has been used to create more than 1 billion slides since its 2016 launch.

As part of the announcement today, the company said it will provide the ability to use PowerPoint Designer with branded templates, along with a feature that suggests pictures based on the text in a presentation, plus a matching theme and color scheme. The company is also unveiling another feature that helps users explain data — suggesting, for example, that the presenter could put the 652,232 square-kilometer size of Afghanistan in context by saying it’s “about equal to the size of Texas.”