Bigelow Aerospace opened up its ground-based prototype for a space station module — or perhaps even a Mars transport habitat — for inspection today at its headquarters in North Las Vegas.

The open house centered on the Mars Transporter Testing Unit, an all-steel mockup of the company’s expandable, fabric-covered B330 space module. For two weeks, a NASA-Bigelow team will be testing the suitability of the B330 concept for crewed deep-space missions.

Northrop Grumman’s modified Cygnus cargo carrier has already won NASA’s nod for use as the crewed mini-habitation module on the future moon-orbiting Gateway outpost, mainly because it was the only one judged likely to be built in time for a 2024 lunar landing.

However, Bigelow Aerospace and other contractors are hoping their concepts will remain in the running for future deep-space facilities.

Bigelow’s expandable space structures are sent into orbit in a folded-up, space-saving configuration, and then filled with air for deployment and use.

Robert Bigelow, the founder of Bigelow Aerospace, noted in a statement issued today that the B330 design evolved from a NASA concept for an expandable habitat capable of carrying a crew to Mars.

“This is important,” Bigelow said. “In deep space, expandable structures have the potential to provide better protection against secondary radiation than traditional aluminum structures.”

Expandable structures have been put through in-space tests for more than a decade. Bigelow started out with two uncrewed modules that were delivered to orbit by Russian rockets in 2006 and 2007 and are still flying today. In 2016, an expandable test module was successfully installed onto one of the International Space Station’s ports.

Bigelow Aerospace has offered the much larger B330 — so named because it offers 330 cubic meters (12,000 cubic feet) of interior volume — for use as a supersized addition to the space station, a free-flying space outpost in Earth orbit, or a moon-orbiting supply depot.

The B330 is built to accommodate four people indefinitely, or five people for a months-long stay. It’s equipped with two galleys, two toilets and two independent propulsion systems that make it “the ideal habitat for a long-duration space mission,” Robert Bigelow said.

Bigelow said the first B330 could be built 42 months after the go-ahead for construction is given. 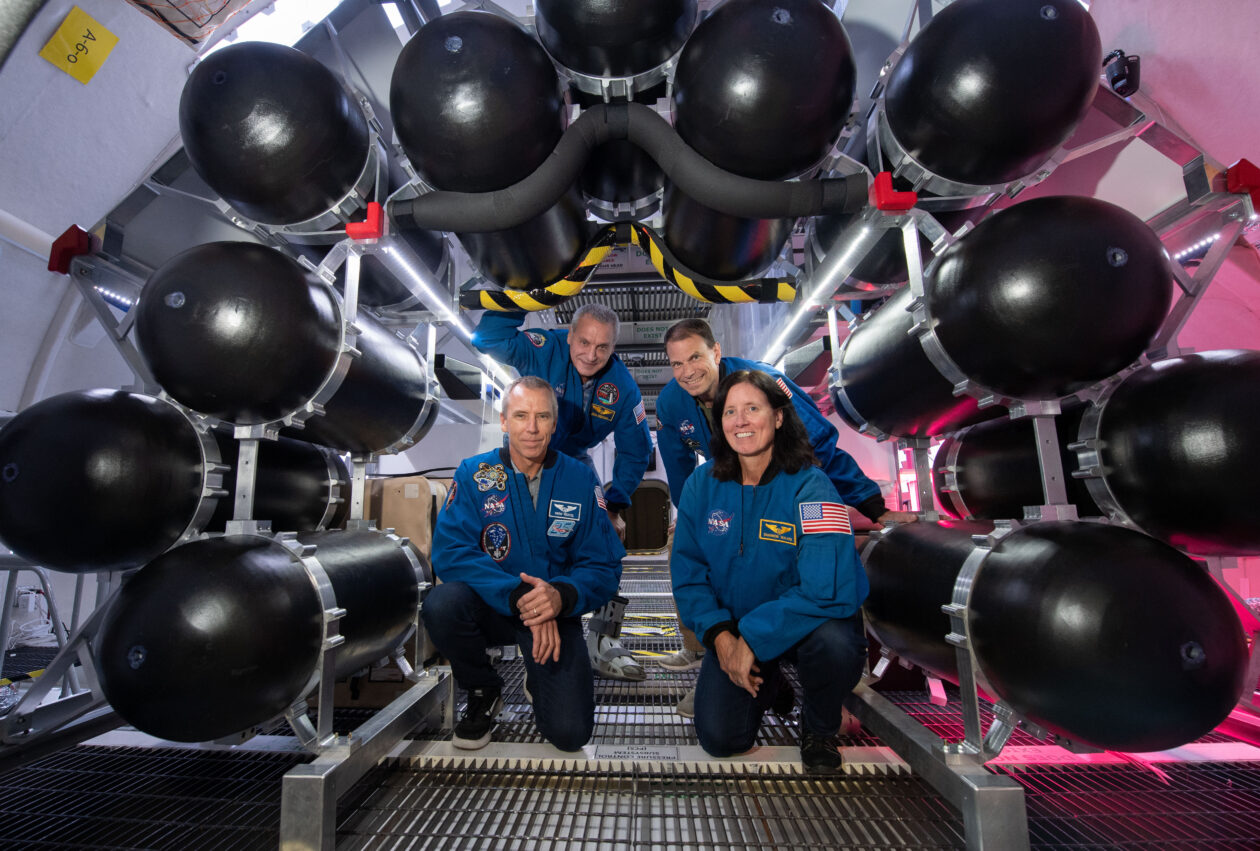 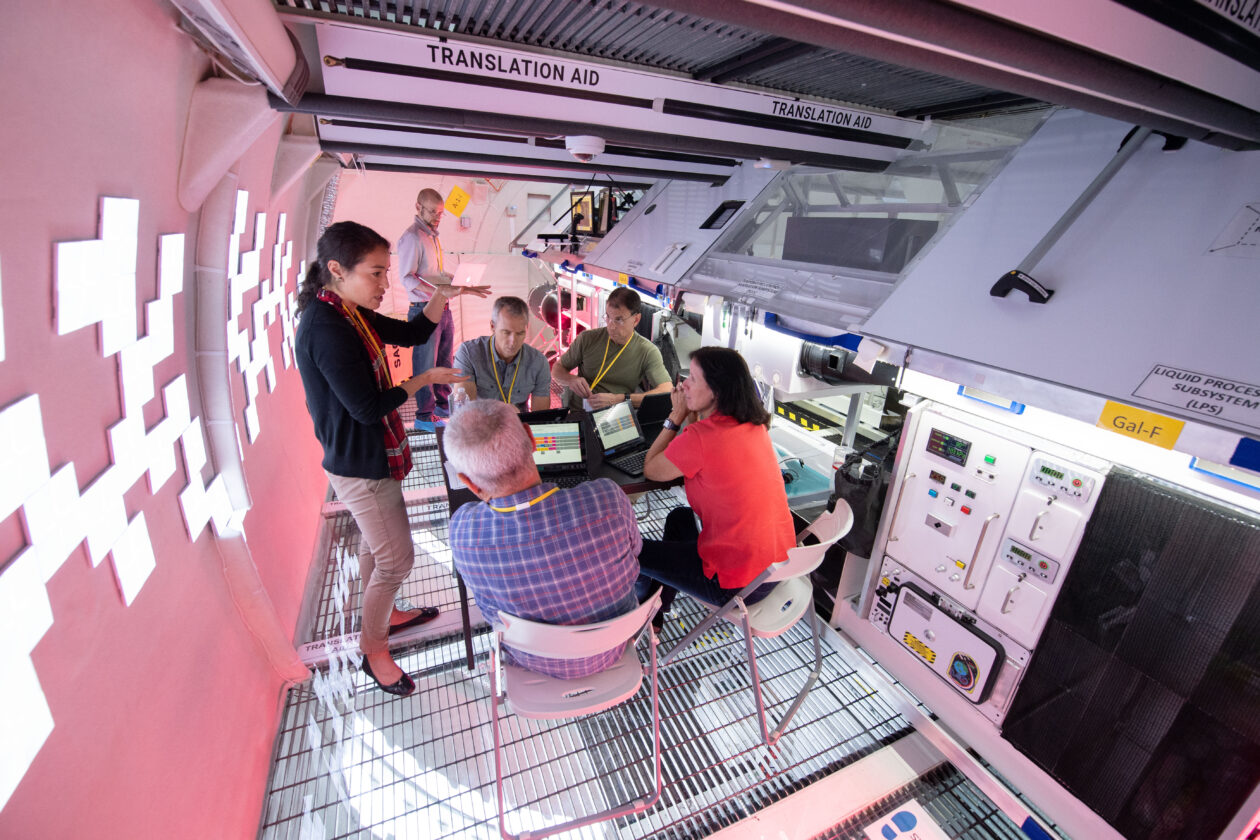 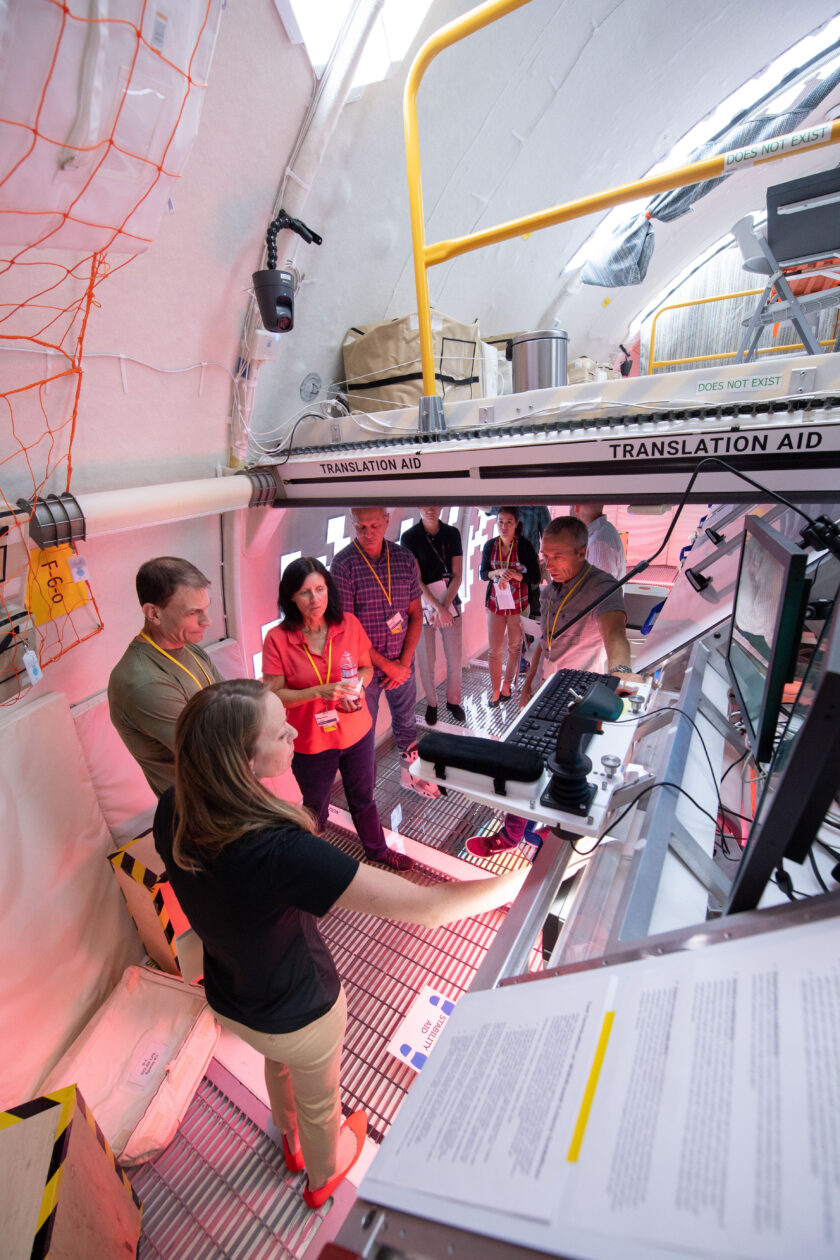 Test participants receive orientation during the ground test on the middle deck of the prototype habitat. (Bigelow Aerospace Photo) 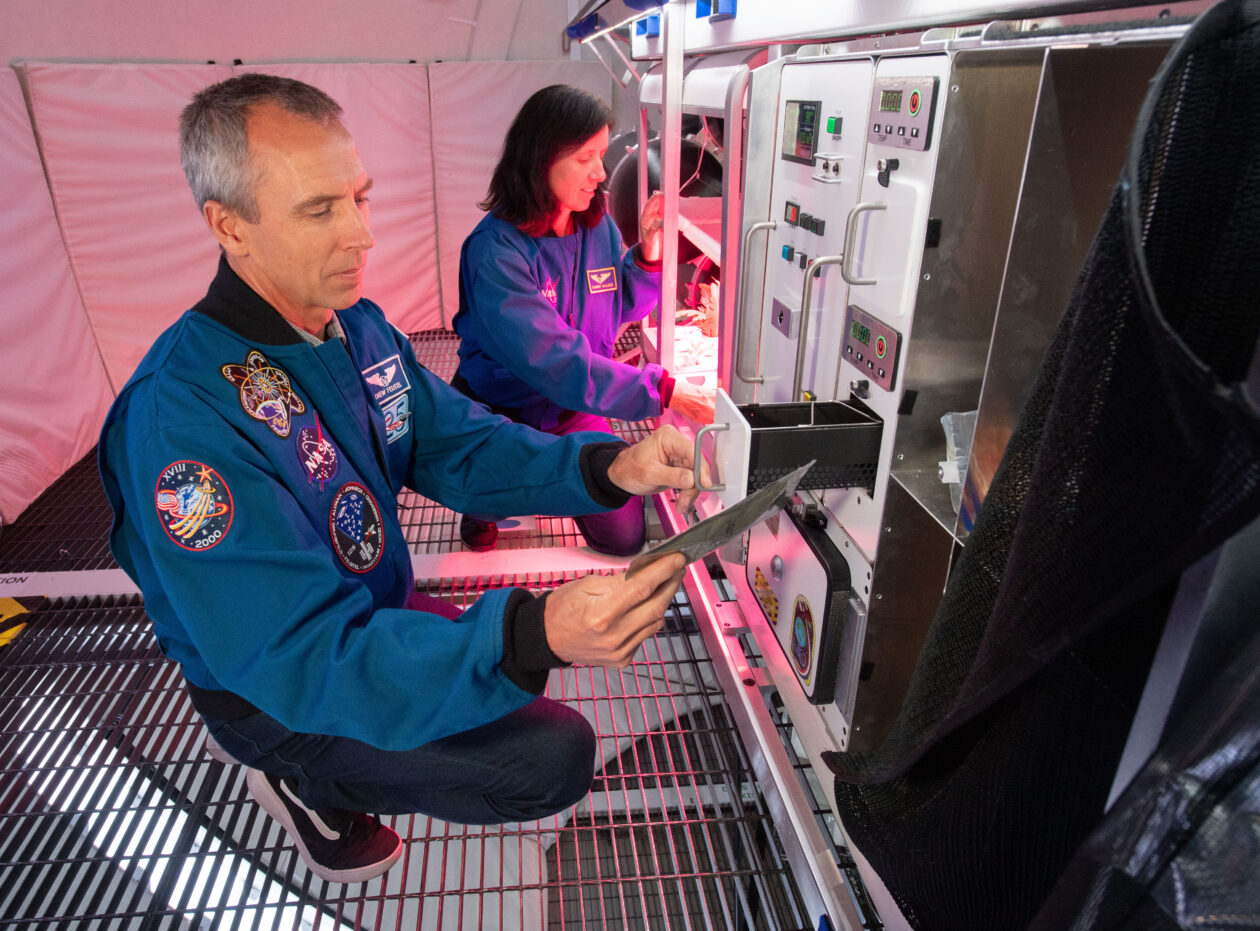 NASA astronauts Drew Feustel and Shannon Walker check out one of the galleys and a veggie garden on the habitat’s middle deck. (Bigelow Aerospace Photo) 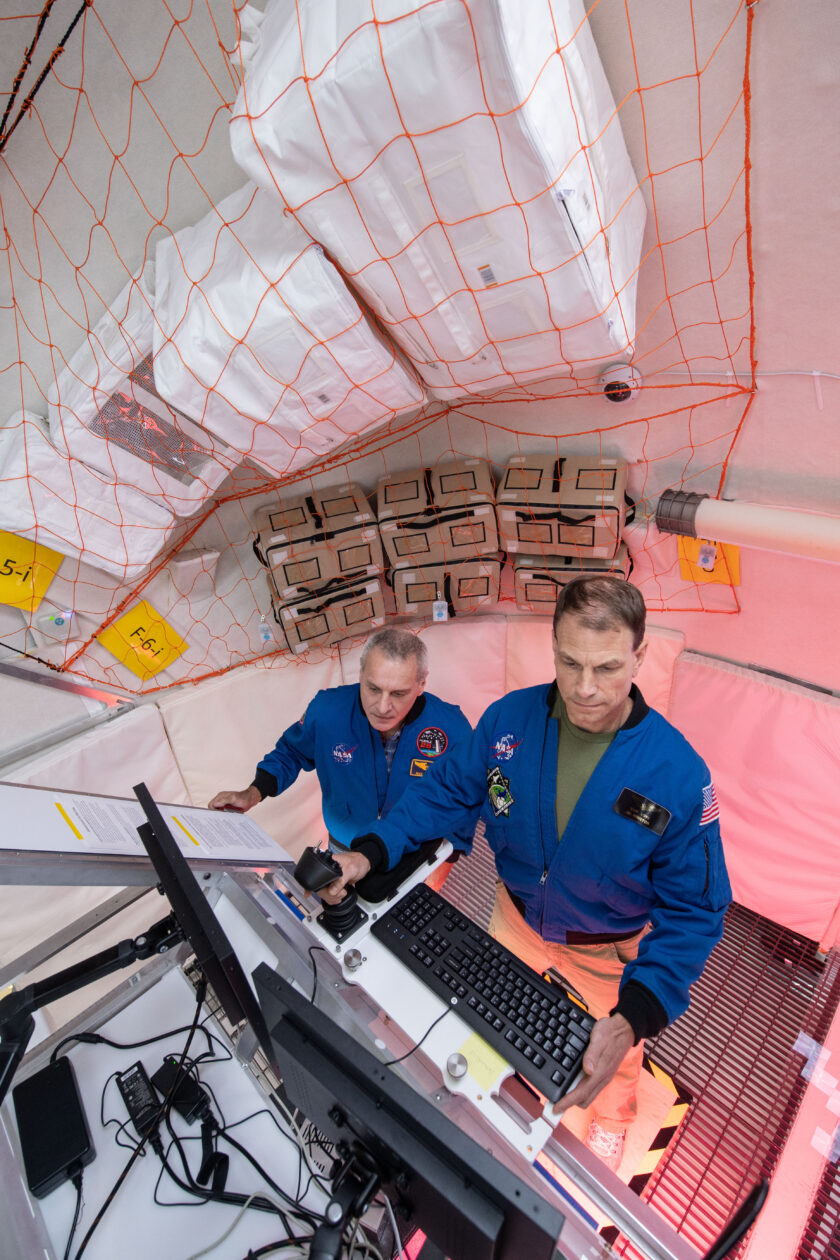 NASA astronauts Richard Linnehan and Stan Love operate one of the habitat’s multipurpose workstations. These workstations are being used to simulate operating a lunar rover on the surface of the moon. (Bigelow Aerospace Photo) 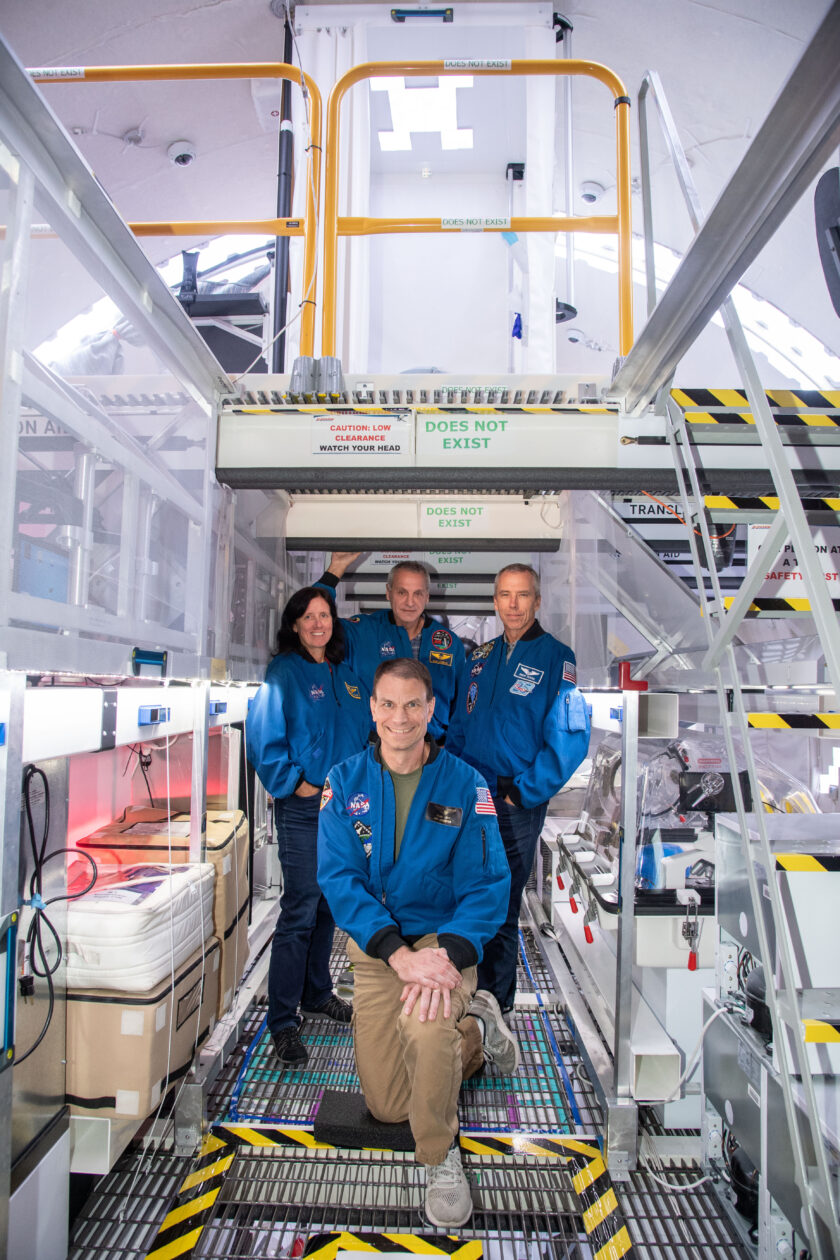 NASA astronauts take their positions inside the center core of the Bigelow Mars Transporter Testing Unit on the middle deck. Signs let the crew know which structures would not exist in the zero-G habitat. (Bigelow Aerospace Photo) 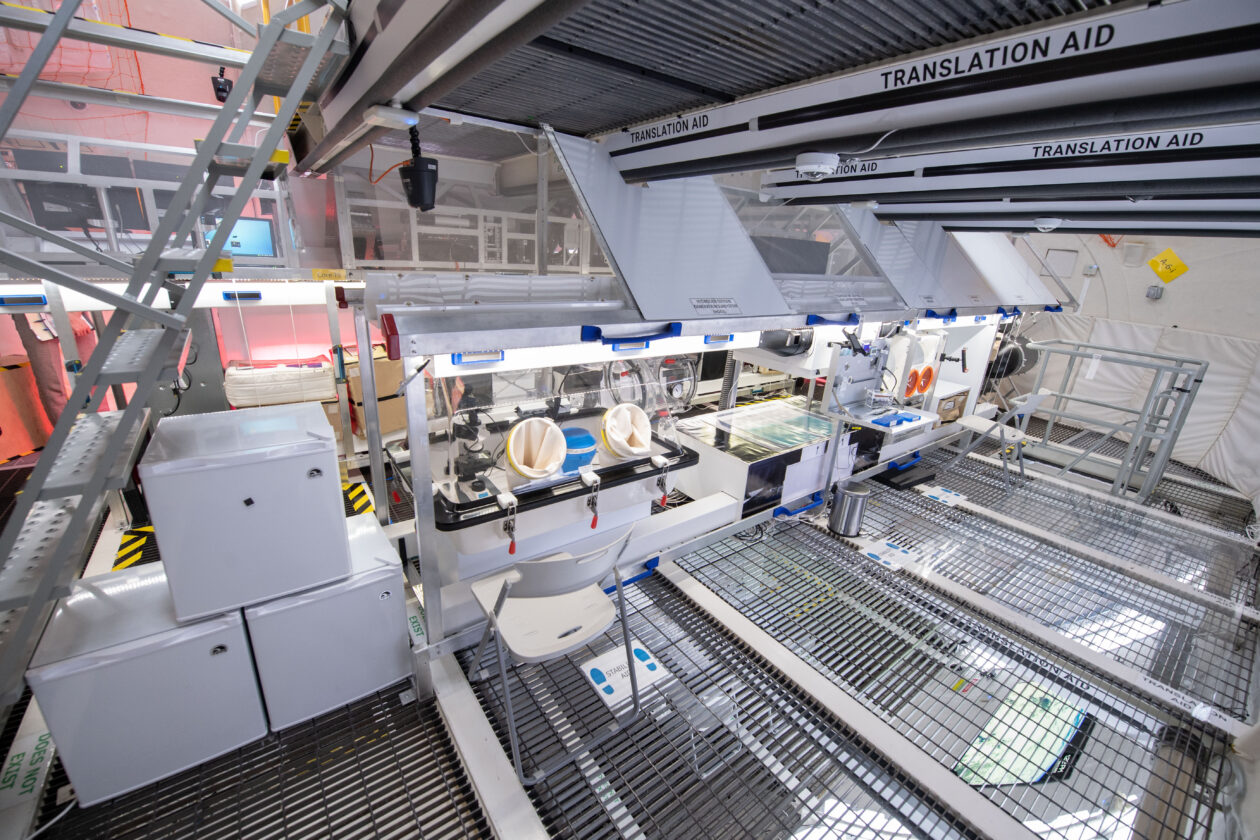 This view shows the middle deck. with the lower deck showing through a grated floor. The chairs are strictly for use during the ground-based simulation. (Bigelow Aerospace Photo) 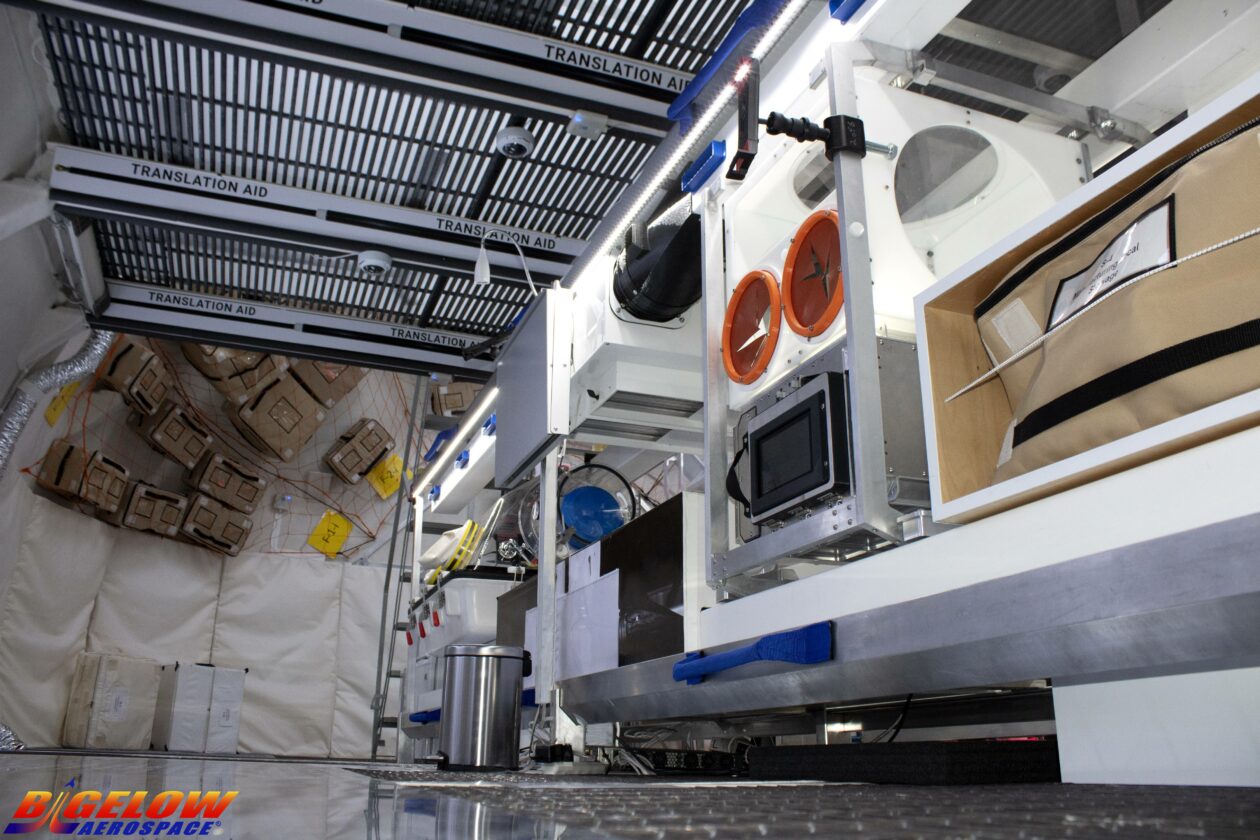 The middle deck of the habitat has two glove boxes that can be used for lunar sample analysis or analysis of biological payloads. On the right-hand side is a 3-D printer. (Bigelow Aerospace Photo) 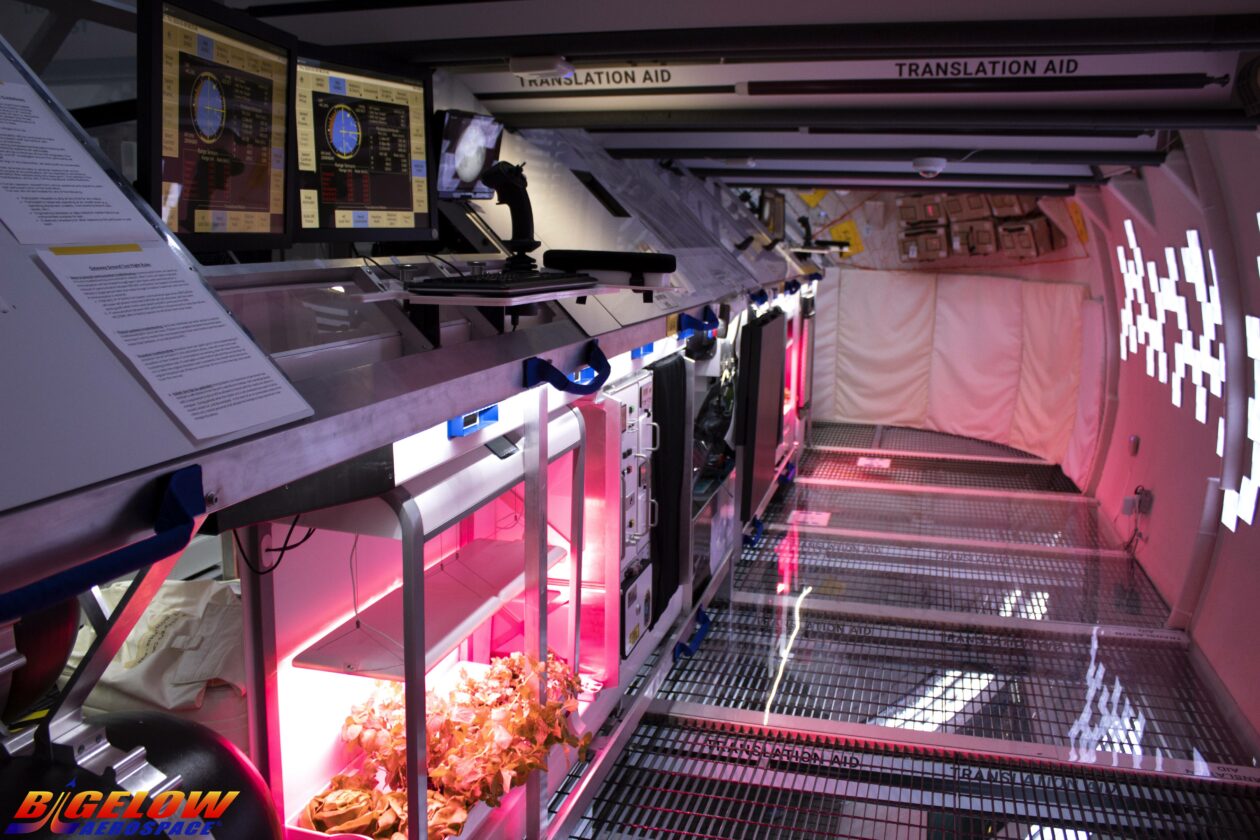 Inside the middle deck of the Bigelow Mars Transporter Testing Unit, you can see two veggie gardens and two galleys. (Bigelow Aerospace Photo) 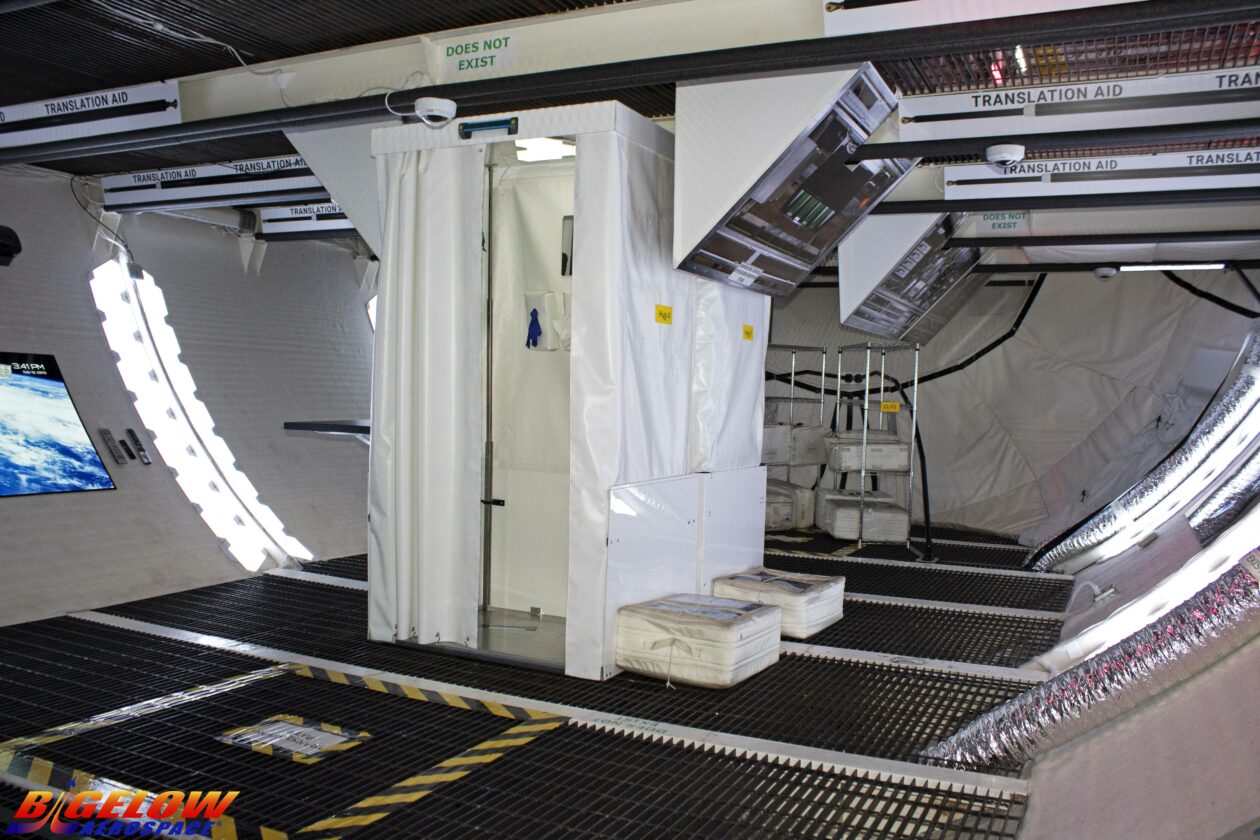 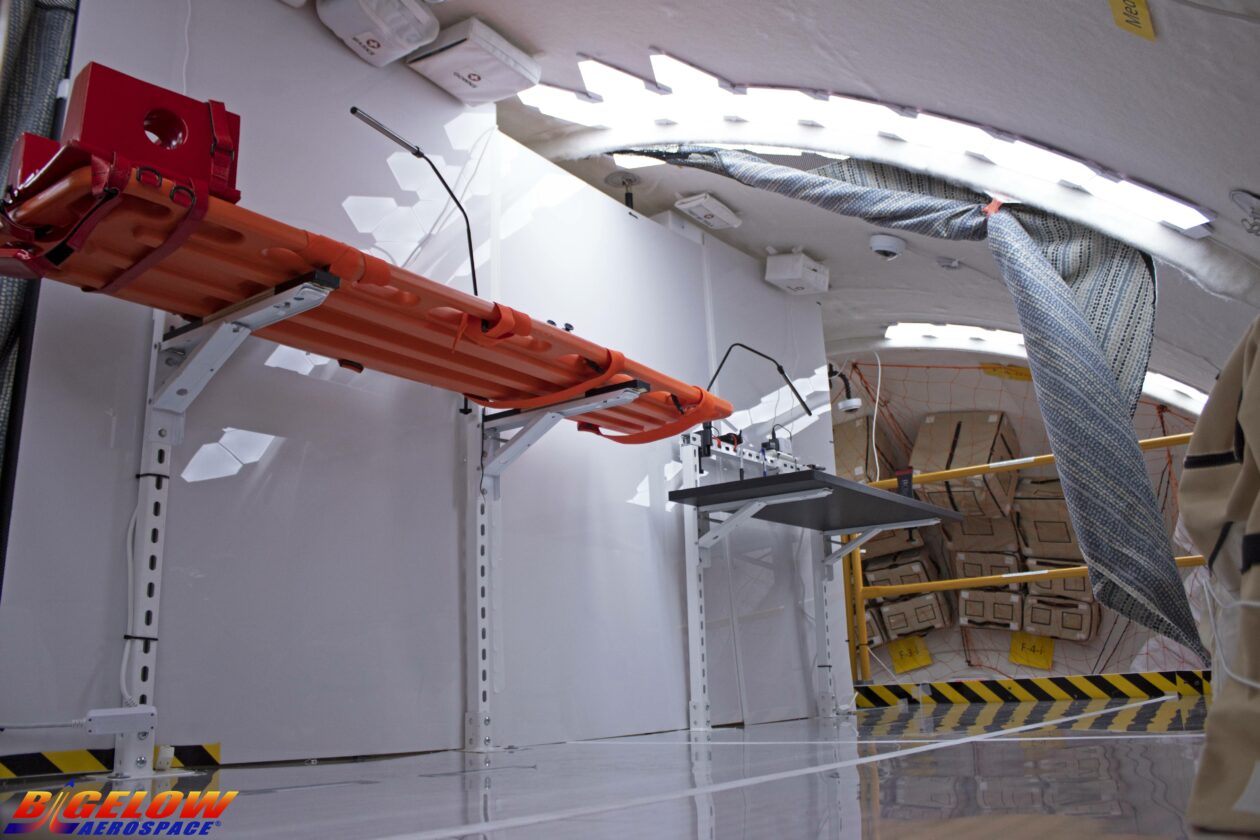 This month’s two-week test involves a team of eight NASA astronauts as well as more than 60 NASA engineers, test leads and support staff at the company’s cavernous Nevada facility.

“In contrast to the other NextSTEP Phase 2 participants, we chose to keep our ground units at our facility so we could continue to develop and test,” Bigelow said. “We also have may units that are too large and complex to feasibly transport back and forth.”

NASA isn’t likely to be the only potential customer for the B330. Bigelow has spoken repeatedly about providing space modules as research platforms for non-NASA clients, or as destinations for space tourists.

In June, Bigelow Aerospace’s service subsidiary, Bigelow Space Operations, struck a deal with SpaceX to arrange commercial rides to the International Space Station at a price of roughly $52 million a seat.

Eventually, Bigelow’s customers might well be staying on a B330, either attached to the ISS or flying on its own.

Update for 10 a.m. PT Sept. 13: In a report from The Verge, Bigelow says the SpaceX deal for trips to the International Space Station has been put on hold, due to the red tape associated with arranging such trips. Instead, Bigelow is thinking about a reality-TV show that would pick contestants to launch to a free-flying B330. Which sounds a lot like reality-TV impresario Mark Burnett’s plan for “Destination Mir” back in 2000.