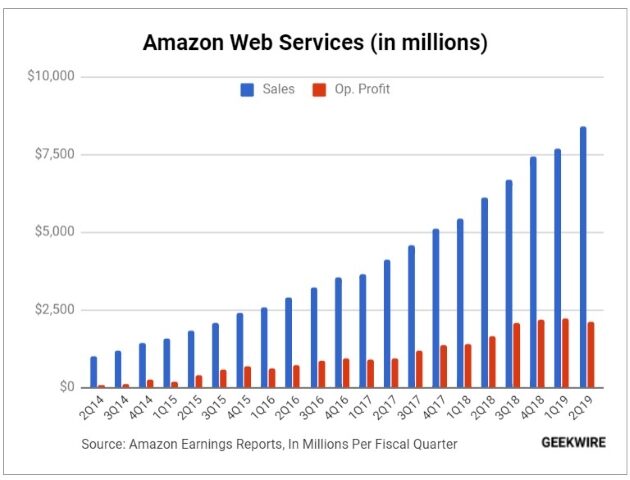 But growth in AWS net sales slipped below 40 percent for the first time, compared to the same quarter a year ago. The growth rate raised questions about the public cloud leader’s momentum in the midst of the tech giant’s second-quarter earnings miss, which sent Amazon stock down in after-hours trading.

The $2.1 billion in AWS operating profits represented more than two-thirds of Amazon’s companywide operating profits, helping the company to continue to make huge investments in the rest of its business.

On a conference call with reporters, Amazon CFO Brian Olsavsky acknowledged the lower percentage growth rate in AWS net sales, but noted that AWS has a $33 billion run rate, referring to net sales it would post for a full year at its current pace. That’s up from a run rate of $24 billion one year ago.

“The bigger point is, we are very happy with the growth,” Oslavsky said. “The revenue growth rate will always fluctuate based on the sales cycle we see with customers and also their migration patterns, and the timing of migrations to AWS products. But on a dollar basis, we are growing faster than anyone.”

By comparison, Google CEO Sundar Pichai said during the company’s quarterly conference call that the revenue run rate for its Google Cloud business has topped $8 billion.

Microsoft continues to grow faster than AWS, although most likely off a smaller base. Alibaba hasn't reported second-quarter results yet pic.twitter.com/CEJkXs9rHz

Microsoft, generally considered the No. 2 public cloud provider by market share, doesn’t provide a comparable revenue run rate number, but its commercial cloud revenue was $11 billion in its most recent quarter. This includes not just Microsoft’s Azure cloud computing platform but also Office 365 commercial, Dynamics Online, and other cloud products and services.