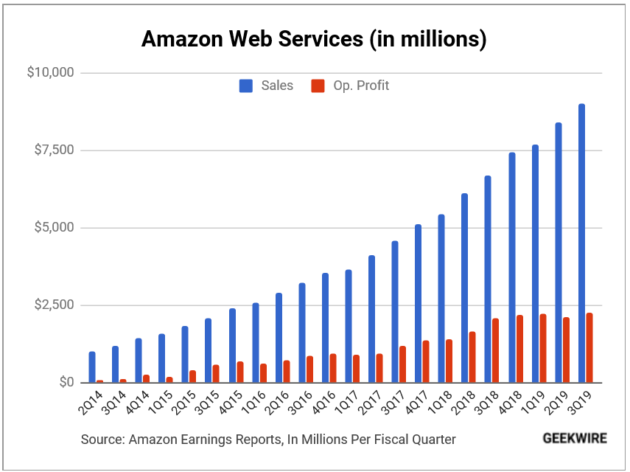 Amazon Web Services yet again powered the tech giant’s bottom line in Q3, but for the second quarter in a row cloud revenue growth dropped below 40 percent.

AWS came close to posting $9 billion in quarterly revenue for the first time, and sales accelerated by 35 percent. However, AWS revenue grew slower than analysts expected and slowed way down from the 46 percent bump from last year’s third quarter.

AWS operating income was a miss: $2.26B vs $2.55B consensus. AWS has driven most of $AMZN's operating profit, so that's a big reason why the stock is plunging – now down about 9% after hours https://t.co/HxemGnVBZo

Amazon is investing heavily in new cloud products, and adding more data centers across the globe, eating into profits. Amazon CFO Brian Olsavsky said on a call with reporters the company continues to add close to 2,000 new products every year.

Olsavsky noted that AWS finished the quarter with a $33 billion run rate, referring to net sales it would post for a full year at its current pace, up $9 billion from last year’s pace. And Olsavsky thinks we are still in the early days of the cloud market, with plenty of room left to grow.

“We’re really happy; it’s very early — I’d caution everyone to remember most enterprise workflows have yet to move to cloud so there’s still much adoption to come,” Olsavsky said.

Microsoft, generally considered the No. 2 public cloud provider by market share, doesn’t break out actual sales figures for its Azure cloud unit. However, the company did say Azure revenue rose 59 percent year-over-year in the most recent quarter.

While the bulk of the reaction to AWS’ latest numbers was negative, Moor Insights & Strategy analyst Patrick Moorhead is looking on the bright side. AWS’ sales growth for the quarter was larger than most cloud companies’ revenue figures for an entire year, he noted. He recommended observers look at AWS compared to its competitors, rather than judging it against its past performance.

“As AWS gets larger, the percentage growth will decline due to the law of large numbers, so I urge everybody to focus on dollar growth and compare it to its competitors like Google Cloud, IBM Cloud, and Azure,” Moorhead wrote.

AWS has consistently made up the bulk of Amazon’s operating profits for the last several years. However, a recent GeekWire analysis found that the rest of the business has landed in the black consistently on its own for the better part of two years.

Arguably the biggest ongoing storyline for AWS is its competition with Microsoft for the $10 billion contract to build the Pentagon’s cloud infrastructure. Amazon has long been thought of as the front-runner for the deal, however, in August the Department of Defense announced it planned to take a second look at the process, which has been plagued by lawsuits and accusations of favoritism.

Also in the quarter, AWS unveiled a new marketplace to help its cloud customers hire professionals for specific projects. AWS customers can now post a project, solicit bids from experts certified by Amazon, and hire them within the AWS portal.

With NFL Thursday Night Football back on Amazon this season, the tech giant amped up extra features for fans. For the first time, viewers can access real-time data from Next Gen Stats, the NFL’s tech-fueled stat platform that runs on AWS. Next Gen Stats was previously only available during games to coaches and broadcasters, or afterward on the NFL’s website, social media, and other platforms.