Amazon finally revealed that it is working on a grocery concept at a prime retail location in Seattle’s popular Capitol Hill neighborhood.

“We can confirm that the Amazon Go team is running internal tests at a location in Capitol Hill but don’t have any additional details to share at this time,” an Amazon spokesperson said in a statement shared with GeekWire.

It’s the first time Amazon has publicly confirmed its work at this location. Amazon has been involved with the site at 600 E. Pike St. since 2015, more than a year before the company’s Amazon Go cashierless grocery concept was even announced.

It’s an unusually large space for a potential new Amazon Go store, and sits below an apartment complex in a residential neighborhood, unlike the 16 existing locations nationwide. 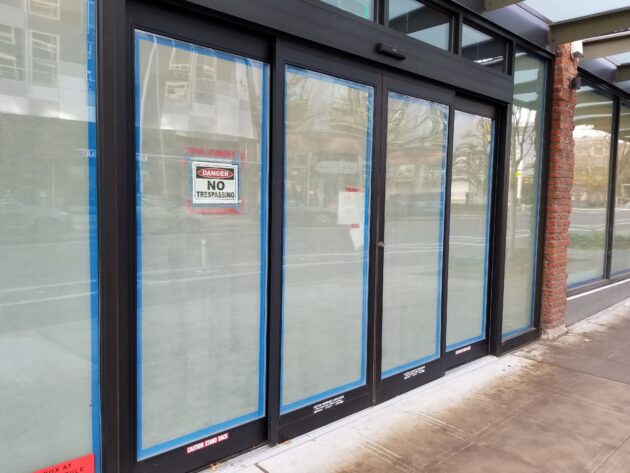 The windows are still well-shielded from the public, so it’s tough to estimate progress. A “No Trespassing” sign was taped to automatic doors when we visited the site today.

Permit filings uncovered by GeekWire earlier this year provide clues as to what’s going on inside.

The site features several hallmarks of Amazon Go. Drawings show space for the entry and exit kiosks where customers scan a QR code on the Amazon Go app that is used to enter the store and pay for items automatically upon exit.

No traditional checkout areas are shown in the drawings. There is a large general sales area with a section for alcohol, as well as an employee break room and storage.

There are, however, a few unique characteristics that make the store stand out and give credence to the possibility that it could be something different from the typical Amazon Go store, as GeekWire previously reported.

It’s unclear if the Capitol Hill location will be under the Amazon Go brand.

The storefront was initially supposed to be the first Amazon Go store until Amazon abandoned its initial plans as the space sat empty until work resumed earlier this year, Bloomberg reported this summer.

Recent reports indicate that Amazon is kicking around a number of ideas to further expand its burgeoning grocery business following its acquisition of Whole Foods two years ago for $13.7 billion.

Earlier this month, The Wall Street Journal reported that Amazon signed leases for more than a dozen sites in the Los Angeles area for a new chain of grocery stores, including one 35,000 square-foot location previously occupied by Toys “R” Us — much bigger than what Amazon has built in the past.

Since opening its first store to the public in January 2018, Amazon Go has grown to 16 locations across Seattle, San Francisco, Chicago and New York.

A mini format Amazon Go debuted earlier last year in one of the tech giant’s office buildings. According to a report last month by CNBC, people familiar with Amazon’s intentions say the company is in talks to bring its Go technology to CIBO Express retail locations at airports and to Regal Cinemas theater locations.

Last year, Bloomberg reported Amazon was considering opening up 3,000 Go stores by 2021, but the speed of expansion thus far makes that seem unlikely.

The high-tech convenience stores operate by requiring customers to scan a unique QR code within the Amazon app before entering. Once they’ve picked up their items, customers leave the store without checking out and Amazon Go’s systems automatically debit their accounts for the items they take, sending the receipt to the app. Amazon began accepting cash after lawmakers pushed back against the cash-free Go concept.

A flurry of other startups are building similar cashierless technology.

This week Amazon announced plans to make grocery delivery a built-in benefit of Prime membership — no longer charging an extra $15 per month, or $180 per year, for Amazon Fresh delivery on top of the $119 annual Prime fee. The tech giant is also expanding and further integrating Whole Foods into its grocery delivery and pickup service.

Amazon entered the brick-and-mortar retail space in 2015, two decades after the e-commerce behemoth originally launched. The company’s “physical stores” arm, which also includes Amazon bookstores and its 4-Star concept, posted a loss of 1 percent to $4.2 billion in the most recent quarter.