Jeff Bezos has set his sights on yet another industry. The Amazon CEO told employees in March that he’s “very excited” about the technological revolution happening in the auto business, according to a CNBC report.

“If you think about the auto industry right now, there’s so many things going on with Uber-ization, electrification, the connected car — so it’s a fascinating industry,” Bezos reportedly said at an all-hands meeting. “It’s going to be something very interesting to watch and participate in, and I’m very excited about that whole industry.”

The comments follow two investments in auto startups from Amazon earlier this year. The company led a $700 million round in Rivian, an electric truck startup, and participated in a round for self-driving car venture Aurora. 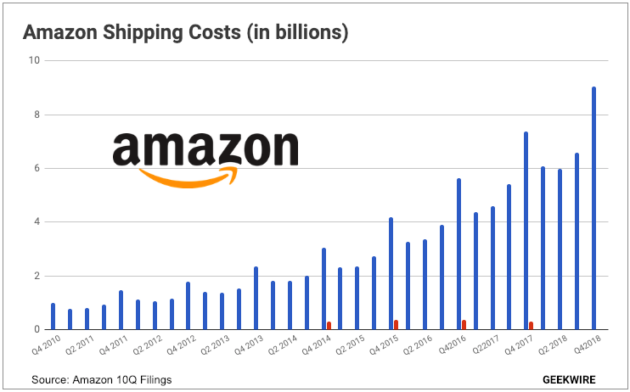 Bezos might see the connected cars of the future as a long-term way to rein in Amazon’s growing shipping bill, which hit a record $9 billion in the 2018 holiday quarter. Despite the high price tag, Amazon shows no sign of cutting costs any time soon. Last month, it announced plans make one-day shipping the new standard for Prime orders.

The company clearly sees solving the delivery conundrum as a high priority. It launched a partner program for small delivery companies that operate fleets of 20 to 40 vehicles and even offered its own employees funding to quit and join the program.

Amazon is currently testing an autonomous robot named Scout that can deliver packages as well as a freight service that matches truckers with shippers.

The retail giant may also see next-generation cars and trucks as an opportunity for its consumer devices. The company has been looking to bring its Alexa voice assistant to the car through partnerships with automakers and device makers as well as its own Echo Auto in-car gadget.

We’ve reached out to Amazon for comment and will update this story when we hear back.